It seems strange to think that 15 years have already passed since the release of the very first Harry Potter movie, but it’s true.

Nearly a decade and a half since we saw the famous ‘Golden Trio’ of Daniel Radcliffe, Rupert Grint and Emma Watson united onscreen for the first time and since children, teens and adults alike fell in love with the big screen vision of the wizarding world.

JK Rowling’s novels and accompanying eight-film franchise have secured a place firmly in the hearts of millions, with a ninth entry in the Harry Potter cinematic universe arriving 2016 in the form of Fantastic Beasts and Where to Find Them.

There’s also Pottermore, for those of us who can’t quite let go, along with the hit London play, Harry Potter and the Cursed Child. And of course there’s always JK Rowling’s highly entertaining Twitter feed, full of Potter-related titbits, such as her recent revelation that Harry and Ginny’s eldest son was sorted into Gryffindor.

A young orphan finds his world turned upside down when he is invited to attend Hogwarts School of Witchcraft and Wizardry. After a life spent as his cousin Dudley’s punching bag, Hogwarts is a dream come true.

The world of magic quickly becomes the beloved home which Harry never knew, and he makes best friends for life in the form of Ron Weasley and Hermione Granger. 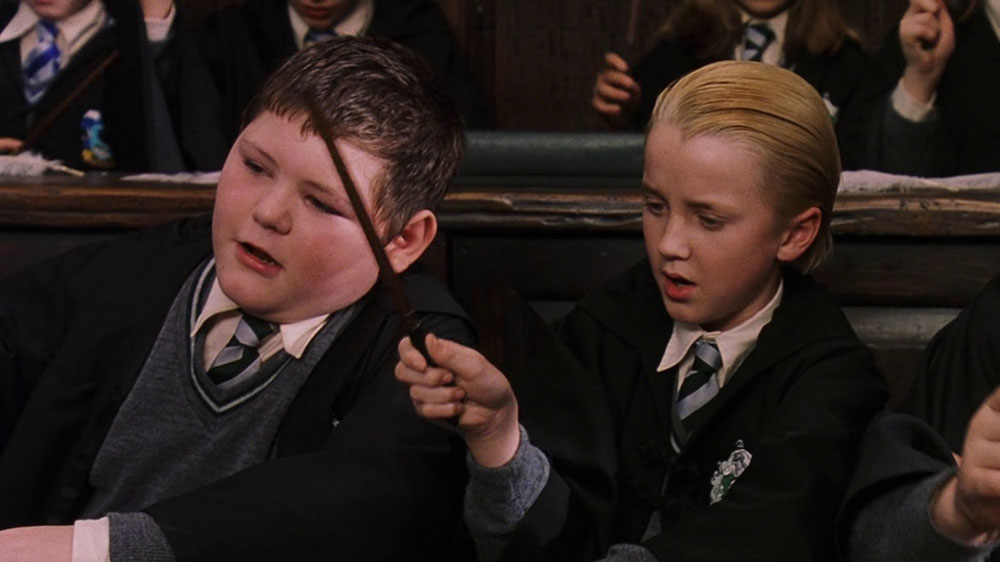 There are also less savoury characters to meet – Harry Potter and the Philosopher’s Stone sees the start of Harry’s rivalry with sneering pureblood Draco Malfoy, along with the beginning of his strained relationship with Professor Snape, who seems to loathe him instantly for reasons Harry can’t yet comprehend.

Harry has a penchant for getting into trouble, and it isn’t long before he finds himself swept up in a mystery with a sinister secret lying at the heart of it: what is the Philosopher’s Stone, and who exactly is trying to steal it?

Daniel Radcliffe takes centre stage as The Boy Who Lived, flanked by Rupert Grint and Emma Watson as Ron and Hermione, all endearingly fluffy-haired and wide-eyed.

The Potter franchise certainly got off to a strong start, casting-wise, with big names like Robbie Coltrane, Maggie Smith, Alan Rickman and Julie Walters lined up for recurring adult roles. Special mention must be made of Richard Harris, who made a fantastic if sadly brief Albus Dumbledore.

Hagrid telling Harry that he is a wizard; Harry’s first trip to Diagon Alley; the Sorting; the first Quidditch match. They’re all up there. 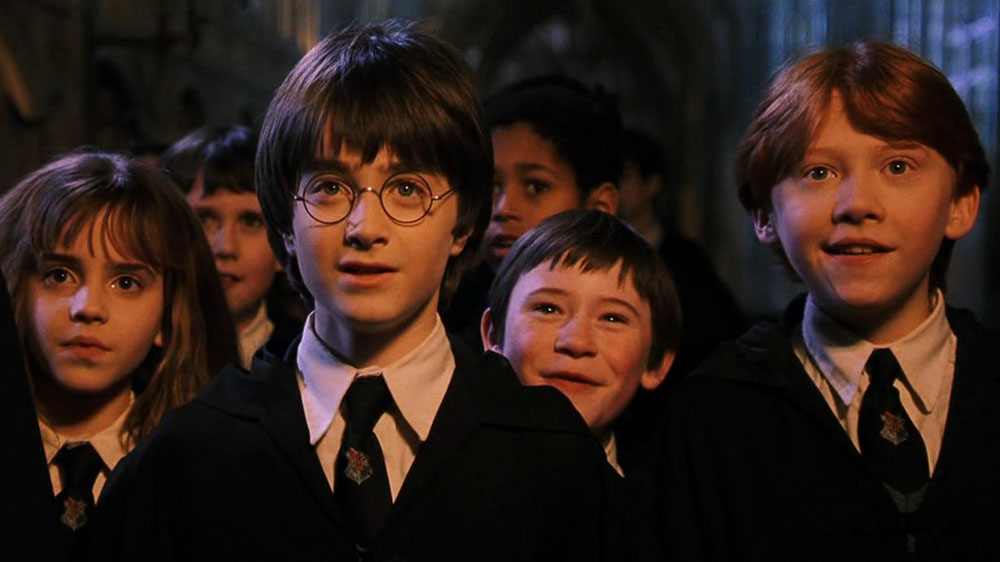 There are plenty of scenes which are all the sweeter for the passage of time, too, such as Harry meeting Ron and Hermione for the first time and Hagrid giving Harry the photo album. And top marks to the Forbidden Forest scene for sheer creepiness.

“Yer a wizard, Harry.” Nothing short of iconic.

“It’s Levi-O-sar, not Levio-SAR.” Don’t deny it, you read that in Emma Watson’s voice.

“It does not do to dwell on dreams, Harry, and forget to live.” One of Dumbledore’s first pearls of wisdom to Harry, and beautifully delivered by Harris.

“Me? Books, cleverness… there are more important things. Friendship and bravery.” Stop it, Hermione, you’ll make me cry.

The Mirror of Erised’s inscription is ‘I show not your face but your heart’s desire’ written backwards.

JK Rowling herself wrote the scene where Hagrid tells Harry about the night his parents died, to prevent any contradictions with future book releases.

Robbie Coltrane (Hagrid) was the first actor to be cast.

When auditioning for the role of Draco Malfoy, Tom Felton had to bluff his way through the director’s questions about favourite scenes in the book, because he hadn’t read any of them – luckily, the director found it funny!

JK Rowling was considered for the role of Lily Potter, but turned it down.

At the time of the film’s release, Harry Potter and the Goblet of Fire was the most recent book release.

JK Rowling personally picked Alan Rickman for the role of Snape and even gave the actor essential details of Snape’s back story that wouldn’t be revealed until the final novel.

If there’s ever a film steeped in endearing nostalgia, it’s this one.

Directed by Home Alone and Mrs. Doubtfire director Chris Columbus, Harry Potter and the Philosopher’s Stone is a wonderful introduction to the wizarding world, for us as well as Harry – it’s fun and heart-warming, and a fitting start to the franchise. After all, if they’d got this one wrong, it’s very unlikely that we’d have seen the whole Potter series on screen – certainly not with such a big budget, anyway! 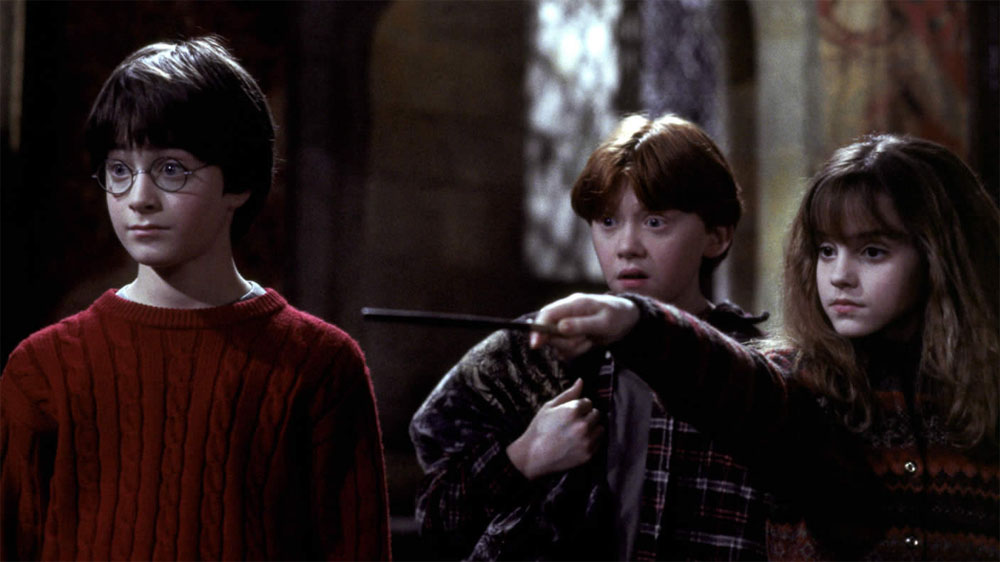 There are sinister moments which foreshadow the tone of later Potter films, but overall, The Philosopher’s Stone is much lighter and upbeat than later instalments; the focus is on Harry’s joy at his new life and his new friends, the joy at finally finding somewhere to fit in.

It does veer close to cheesiness at times, but it’s forgivable – the young core cast are still finding their feet, and looking back now, the film is all the more loveable for it.

What’s your favourite bit in Harry Potter and the Philosopher’s Stone? Let us know below…

Read more from Amy Archer-Williams on her blog here.