It’s the most financially successful James Bond film (adjusted for inflation), the second (after Goldfinger) to win an Oscar, this time for Best Visual Effects, and infamously remade as Never Say Never Again, luring Sean Connery back to the role, in 1983.

AND YET. Reaction to Thunderball has always been decidedly mixed, for reasons that will soon become evident.

SPECTRE are back after a brief, golden hiatus, and this time they’ve nicked some atomic bombs and are holding the world to ransom for £100m in diamonds, as you do.

There’s plastic surgery, a villain with an eyepatch, a different villain with a kickass motorbike, a liberal litter of underwater sequences that may or may not be largely interchangeable (and interminable) and arguably the best named yacht in the world: the Disco Volante.

Now is probably the time when Sean Connery was beginning to get a little fed up with his original contract and the strain is starting to show. Without any character development for James Bond to speak of this was an easy role to phone in, the traces of which are starting to be perceptible. On the other hand as an audience of these early Bonds we’re not here for anything other than standard Bond procedure so he mostly gets away with it. 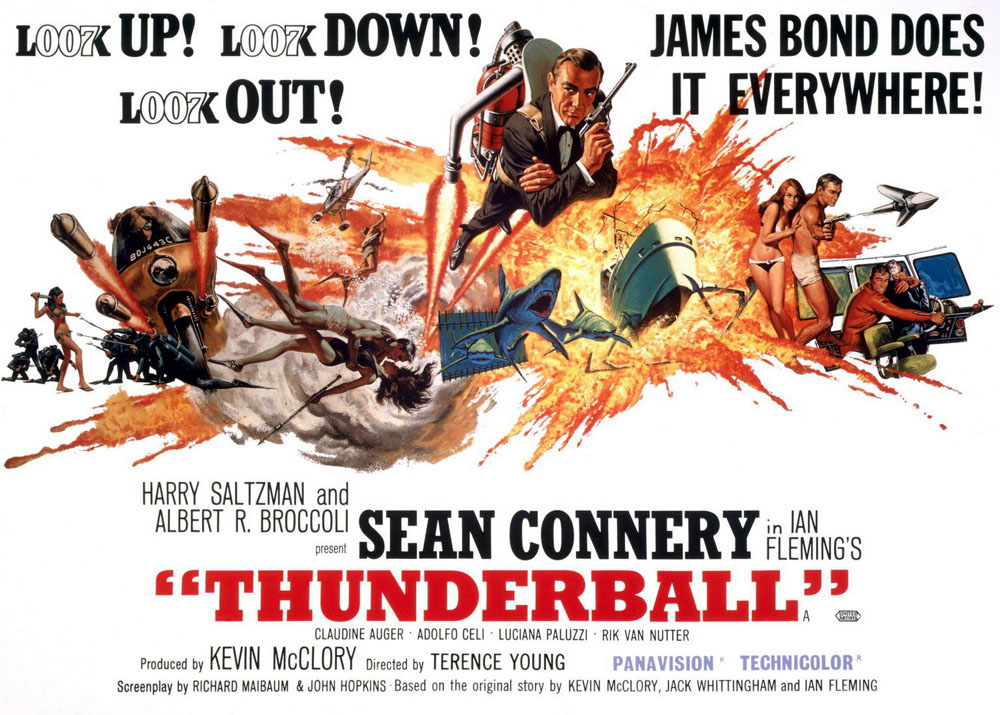 Third time round for Felix Leiter and we’re already three actors in. Once again he’s mostly relegated to the last minute rescue of Bond and once again the actor of choice, this time Rik van Nutter, offers few surprises with the role.

Bernard Lee, Lois Maxwell and Bernard Llewelyn could probably do this in their sleep by now, and they’ve got a long way to go. Llewelyn has the best deal since he gets to meet Bond in the Bahamas (complete with a very loud shirt) to provide his miniature breathing apparatus.

On the face of it all Emilio Largo wants is to assist SPECTRE (and therefore Blofeld) in the usual plot to threaten the world with a nuclear bomb – so far, so classic early Bond villain. He’s got that eyepatch, an obsession with sharks and an extremely unhealthy relationship with Domino, the girl he essentially keeps captive with the promise of the return of her brother. But really, that’s about it. 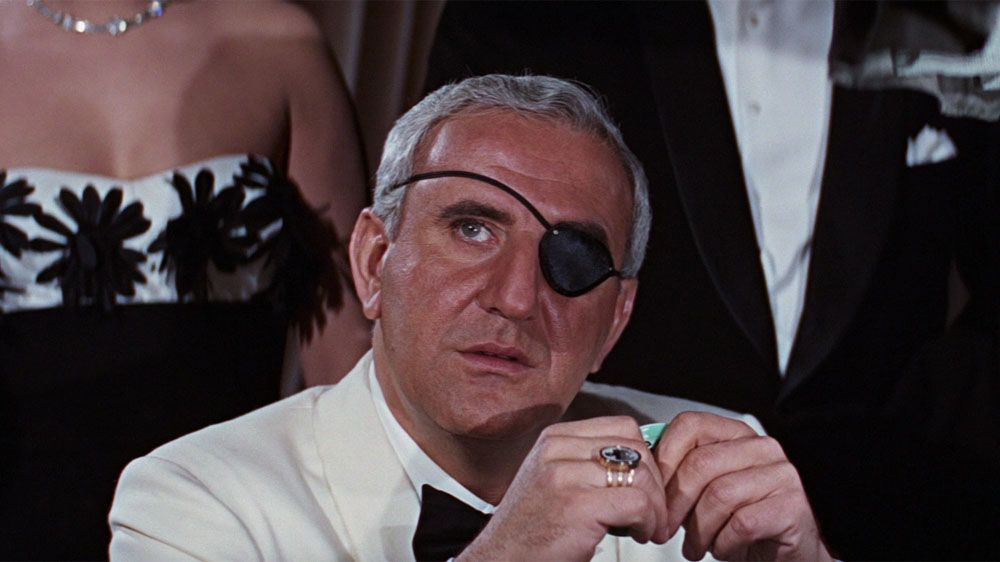 Adolfo Celi does his best in a role that never really feels all that dangerous. If anything he’s threatened by Bond (who’s clearly better at getting through to Domino) which makes for a rather unassuming villain. His hench(wo)man Fiona Volpe, on the other hand, is far more interesting.

Luciana Paluzzi has by far the best role in Thunderball as Fiona – the glamorous, motorbike-riding assassin who sadly doesn’t make it to the end credits due to a fortuitous dance move by the ever-lucky James Bond. She gets to drive fast, sleep with Bond and mock him for thinking that this might turn her from the dark side, possibly as a veiled commentary on what happened with Pussy Galore in Goldfinger. All in all it’s a real shame she didn’t live to see another Bond. 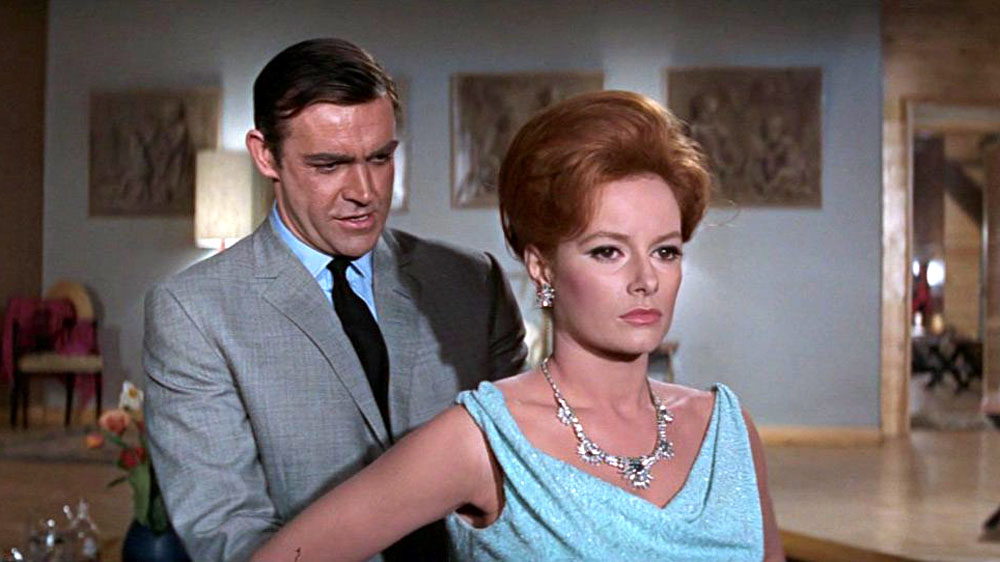 Guy Doleman’s Count Lippe isn’t on screen for long, but he does try to kill Bond by method of… a physiotherapy equivalent of a medieval rack? It’s not entirely clear what the machine would achieve if used correctly, or why it can be turned up to eleven in the first place, but it is almost successful so cannot be ignored. Bond gets his revenge by locking Lippe in a mini sauna that looks like a really fat Dalek, so there’s that.

Domino is young, naïve, only dresses in black and white – it’s unclear if the name came before or after this little quirk – and in a first for the principal Bond girl, a brunette. Claudine Auger continues the trend of Bond girls who are dubbed on screen (Honor Blackman is the notable exception) in a role that has unusual depth.

She’s manipulated into staying with Largo, and then manipulated into helping Bond once he reveals the truth about her brother – and yet it does appear that she’s not totally sold on this story or her actions until Largo catches and tortures her. She even gets the final say in that twisted relationship, proving herself very handy with a harpoon. 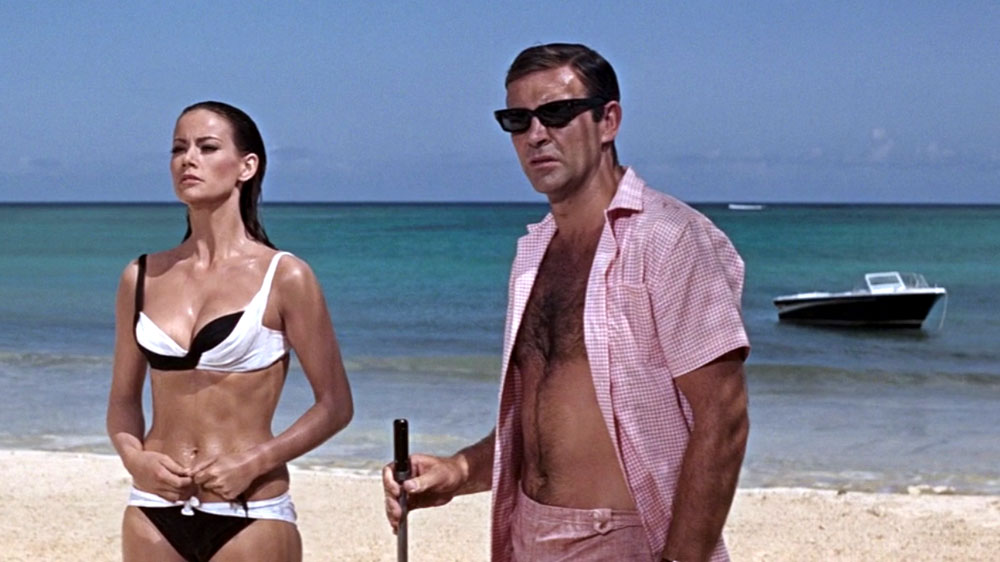 As Paula, you may also recognise Martine Beswick as Zora, one of the fighting gypsy girls in From Russia with Love. Beswick is given a more substantial part (and not credited as Martin Beswick) this time, as Bond’s ally in Nassau, generally aiding and abetting and looking good in a swimsuit in a way that Felix Leiter could never quite achieve. Kidnapped by Volpe she tragically commits suicide rather than be tortured for information, not knowing that Bond was almost to the rescue.

Molly Peters’ Patricia has the unenviable task of trying to persuade Bond to accept his limitations and succumb to her physiotherapy regime. Of course once Lippe gets him on the rack he wastes no time in manipulating her into sleeping with him. Private clinics do things differently, it seems.

The cold open is a strange one, and clearly designed around the fact the producers had permission to use a jetpack and wanted to get some extra screentime for the Goldfinger Aston Martin DB5. Which all seems fine on paper, especially when you add a cross-dressing widow in to the mix, but is somehow mostly underwhelming.

Bond’s fight scene with Colonel Jacques Bouver (the aforementioned ‘widow’) has nothing on Bond v Red in the train car in From Russia with Love and generally feels over edited – although you’ve got to love a grandfather clock being used as a weapon. However, the jetpack is still pretty cool five decads on, even if Bond is forced to where a helmet for health and safety reasons.

Not once but twice does Bond prove himself to be an excellent shot. Wisely, when spearing a henchman with a harpoon and unwisely when his innate need to show off kicks in during a clay pigeon shooting jolly with Largo. Still, if he wasn’t trying to embarrass an egotistical megalomaniac then it wouldn’t really be a Bond film.

Sharks are brilliant. Fast, deadly if they want to be and utterly inscrutable. How wise it may or may not be to keep several of them in your swimming pool is debatable, but there’s no doubt that they make for a good conversation piece. The concept has since been parodied to death but even still, and even without laser beams attached to their heads, they make for excellent cinema.

The man flying the jetpack in the opening sequence was Bill Suiter, one of only two people in the world qualified to fly it at that time.

On occasion the sharks that Bond was supposedly swimming with got rather closer to Connery than was intended – meaning that some of those reactions are real.

The only time all the 00 agents are visible in one shot, although we don’t get to see any of their faces.

The first Bond film to actually feature the current Bond actor in the gun-barrel sequence instead of a stuntman.

Rumour has it that Tom Jones fainted when recording the title song’s final high note.

There’s a brief shot of a dog having a wee during the Junkanoo sequence.

The first Bond film in which Bond doesn’t smoke.

Bond doesn’t drink a Martini in this film, so if you fancy a tipple as you watch it will have to be a Dom Perignon ’55, as ordered by the pool whilst dining with Domino.

The translation of the film’s Dutch title is, rather brilliantly, ‘Calm Down, Mr. Bond’.

Thunderball has long-divided fans. On the one hand it’s classic Bond, with Sean Connery and the original team. On the other it’s longer than its story requires and spends far too much time on the repetitive underwater fights scenes.

But we like to focus on the positive and so we’ll mention that jetpack again, and the enjoyable nonsense that is getting done up in full makeup and a veil to play a widow when you could simply go into hiding. There’s also that chair sequence in the SPECTRE meeting room, albeit now slightly ruined by Austin Powers.

Basically let’s just soak up another excuse to spend time with Bond in the Bahamas because if we look at it all too closely it tends to fall apart.

James Bond will return in You Only Live Twice.

What do you think of Thunderball? Let us know below…