We bid farewell to Sean Connery and welcome Roger Moore to the fold in 1973’s Live and Let Die.

Moore had been on the Broccoli’s radar for years but his commitments to The Saint and the availability of Connery had thus far always ruled him out. But eventually the Tarot cards aligned and the world got the first taste of a more debonair, quip-happy Bond that would rule the roost for some time to come.

British agents are being killed all over the world and nobody knows why. Of course, it soon takes in the global heroin trade, a whole lot of voodoo, snakes, sharks and some hungry crocodiles.

Roger Moore’s first turn on the James Bond merry-go-round is confident, charming and far more complete than Sean Connery’s return had been in Diamonds are Forever.

This new Bond looks and feels refreshed, and whilst Moore’s arched eyebrow may now be something of a joke, in the Bond universe, he couldn’t perform the move because it was too associated with The Saint.

Still, we’re left with a Bond who knows he can come across ridiculous and really doesn’t care. Sometimes a sense of humour about a character can transform it, and this is one of those cases.

As usual, there’s another new face playing the CIA’s only agent, Felix Leiter. This time it is David Hedison, who not only became the first Leiter to return (in 1989’s Licence to Kill) but is also arguably the first Leiter since Jack Lord in Dr. No who actually gets to do something useful on film.

Most importantly, when presented with a CIA gadget cigarette lighter that doubles as a walkie-talkie, Bond gets to say the immortal line: ‘A genuine Felix lighter. Illuminating.’

There’s no Q for the only time in the franchise’s history (although he is mentioned by name), which considering his magnetic watch gadget gets quite a lot of screen time seems weird. Still, M (Bernard Lee) and Moneypenny (Lois Maxwell) more than make up for his absence when they come to Bond’s apartment to send him away on his new mission – oh, and he’s got an Italian agent hidden in his coat closet, of course.

Dr. No’s most frustrating death was Quarrel’s at the hands of the ‘dragon’. A somewhat forced attempt to make up for that error is to shoehorn his son, Quarrel, Jr., into Live and Let Die. Roy Stewart does his best but he’s mostly fulfilling the usual Leiter role of little more than briefly helping Bond travel somewhere or other.

Live and Let Die probably still has the biggest roster of memorable bad guys in a single Bond movie.

As Kananga aka Mr. Big, a corrupt Caribbean Prime Minister-cum-dictator who is also the leader of a New York City drug gang, Yaphet Kotto gets to play that unusual Bond villain: the one who isn’t a megalomaniac who designs on nuclear war but is mostly just a fairly successful crime lord who pretty much only wants to make money.

Considering the voodoo protection he may or may not have it’s quite refreshing that his plan is relatively mundane. He also has a realistically vicious temper and a refreshing attitude towards genuinely trying to get rid of Bond whenever the opportunity arises. 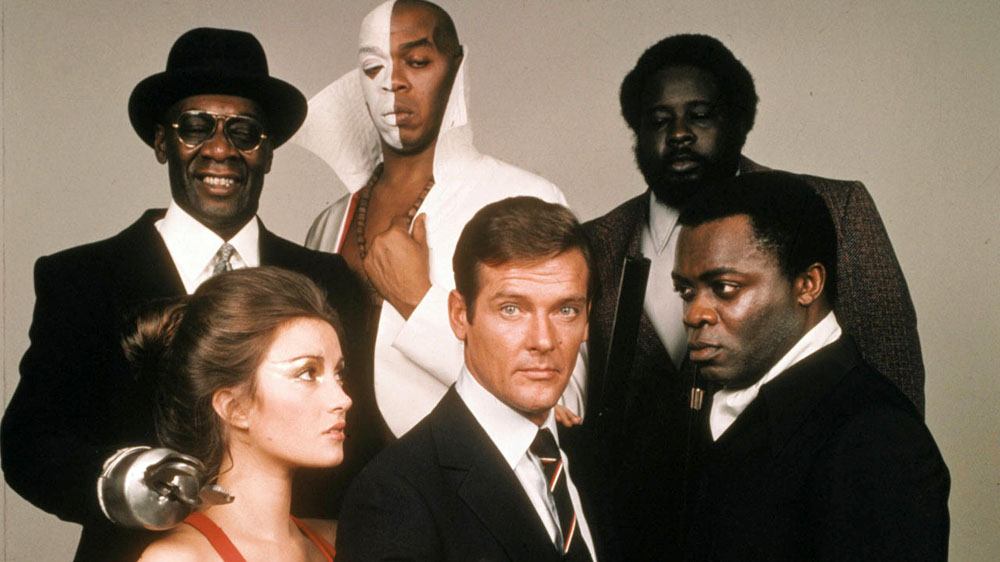 Religion and spirituality of any kind rarely makes an appearance in Bond films so it’s hard to know what to make of Geoffrey Holder’s apparently immortal voodoo priest, Baron Samedi. Purists may be less keen on the sudden (and only) addition of supernatural to the Bond universe, but when a character is this fun, who really cares?

Of course, every Bond villain has to have some henchmen. Kananga has several, but the two that stand out are Whisper (Earl Jolly Brown), so called because he can only speak in (you guessed it) a whisper, and Tee Hee, who only has one arm – the other one having been bitten off by a crocodile named Albert and replaced with a metal hook.

And let’s not forget Clifton James as the bumbling redneck Sheriff JW Pepper, although he’s less a villain and more of a comic-relief irritant who isn’t really that funny. We do love the delivery of this ‘Secret agent?! On whose side?’ line though.

After the feisty (if progressively incompetent as the film develops) Tiffany Case in Diamonds are Forever it’s back to the ‘classic’ passive Bond girl with Jane Seymour’s Solitaire.

As with Baron Samedi she has a touch of the supernatural (reading the future with Tarot cards) but unlike Samedi she doesn’t get to keep her powers. It’s a classic trope – the seer who has sex and loses her powers – but it does reduce her character to rescue bait. She does get to rock some all-powerful gold eyeshadow and a series of epic head pieces though, so it’s not all bad news. 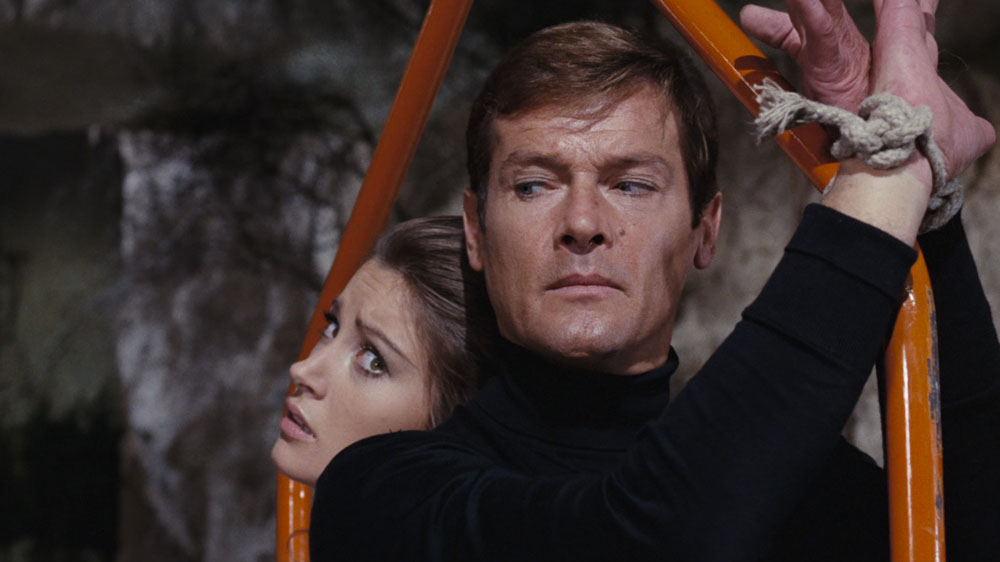 Gloria Hendry plays the first black Bond girl, but quickly turns out to be a baddie before being promptly killed by a bloody terrifying scarecrow. An agent who doesn’t even know how to take the safety off a gun, it’s unclear what threat she was expected to be to Bond. Hendry puts her all into some solid screaming work before her demise though.

Lastly, there’s Miss Caruso (played by Madeline Smith) who gets to be undressed by Bond via the magic of his magnetic watch pulling on her zipper, and so is clearly worthy of a mention. It was ‘sheer magnetism, darling.’

As Bond stunts go this is hard to beat, and the best bit is that it was all done for real. The sign on the crocodile farm that reads ‘Trespassers will be eaten’ is a) genuine and b) what drew the producers attention to the existence of the farm.

The guy who ran it, named Kananga, and thus the name-inspiration for the villain Kananga, had seen his father be killed by a crocodile (who still lived on the farm) and is the man that performed the stunt. It took five attempts, nearly went wrong more than once, and was totally worth it.

In addition, Roger Moore was wearing crocodile-skin shoes in those scenes – which he may have somewhat regretted when the crocodiles genuinely got closer than desired when he was stranded on the island.

Legend has it that pretty much every Bond villain in history has sharks (apart from Silva, who we know was more of a rats fan). But the sharks in this case are really just an excuse for one of the most ridiculous deaths in Bond history: death by inflation.

Whisper is amusingly thrown off an inflatable sofa, but Kananga is literally blown-up like a balloon and popped. After all, ‘he always did have an inflated opinion of himself.’

It’s a veritable menagerie of wildlife in this film. Some of the snakes appear to be very plastic, some are hacked to death and some, if the stories are to be believed, are very much real. 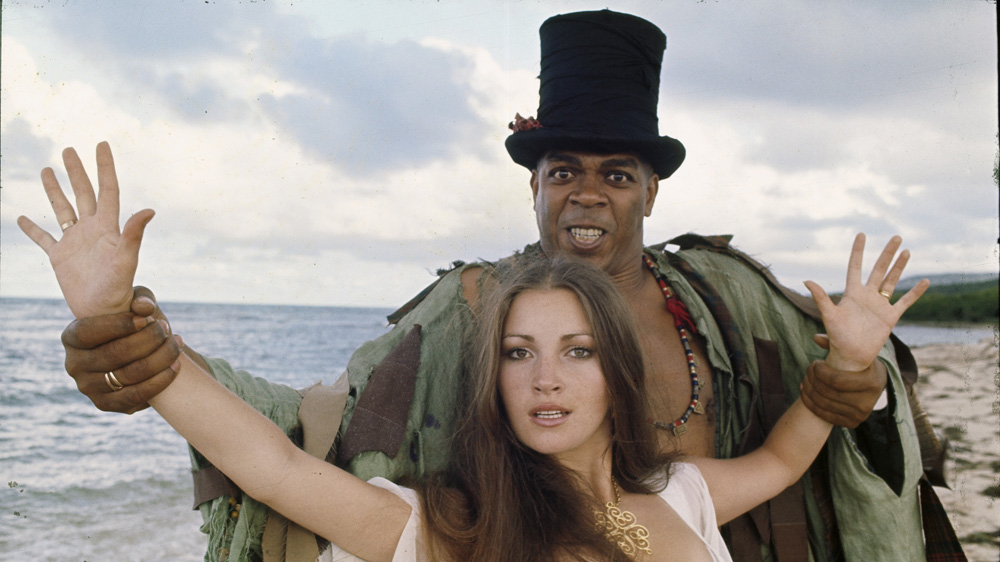 One of the snake-handlers was bitten as he danced in front of a tied-up Seymour and dropped a snake that then made a bee-line for her. And Geoffrey Holder was so scared of snakes that he almost refused to film the scene where he falls in the coffin filled with them, but felt he had no choice when Princess Alexandra fortuitously visited the set on the day of filming.

Where next can Bond go with the traditional car chase? Turns out ‘next’ is getaway via rickety double-decker bus. For unknown reasons Jane Seymour was genuinely on the bus throughout, even as it hit the low bridge and lost its top.

If the bus chase was played solely for laughs, the boat chase on the bayou gave us the best of both words. It’s fast, it’s furious and it’s bloomin’ fun to watch. 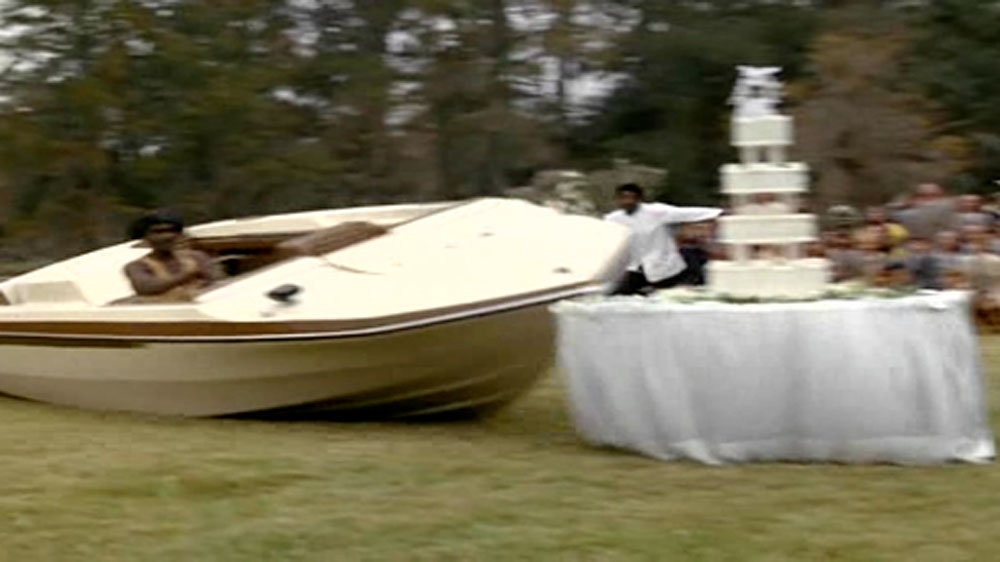 The chase was added relatively last minute because the producers had wanted to film the funeral scenes in New Orleans but couldn’t justify the expense unless a bigger segment was added for the location. In the script it just said ‘the most terrific boat chase you’ve ever seen’, and they delivered.

Diana Ross was considered for the role of Solitaire.

In filming the boat chase they set the world record for the most boat jumps.

Sean Connery had been paid $1.2m to star in Diamonds are Forever, but turned down $5.5m for Live and Let Die.

Clint Eastwood was offered the role of James Bond but (wisely) recognised that Bond should be British.

Moore cracked his front teeth and twisted a knee when filming the boat chase, causing him to walk with a cane for a few days. Fortunately the rest of the boat scenes were scripted with him sitting down in a boat.

The apartheid government of South Africa had all scenes removed where Bond kissed or made love to Rosie Carver.

Moore’s Bond drinks whiskey and smokes cigars rather than Connery’s vodka and cigarettes.

Paul McCartney’s theme song is heard within the film, sung live by B. J. Arnau at the Fillet of Soul nightclub.

The pre-credits sequence does not feature James Bond for the second time in the series. The first was From Russia with Love, with an agent impersonating Bond.

It turned out that Roger Moore was exactly the shot of adrenalin that the Bond franchise required. He’s arch, witty, believable as a man who can get out of any situation and into and woman’s bedroom, and capable of just enough physicality to not seem like quite the thug that Connery’s Bond could occasionally be. 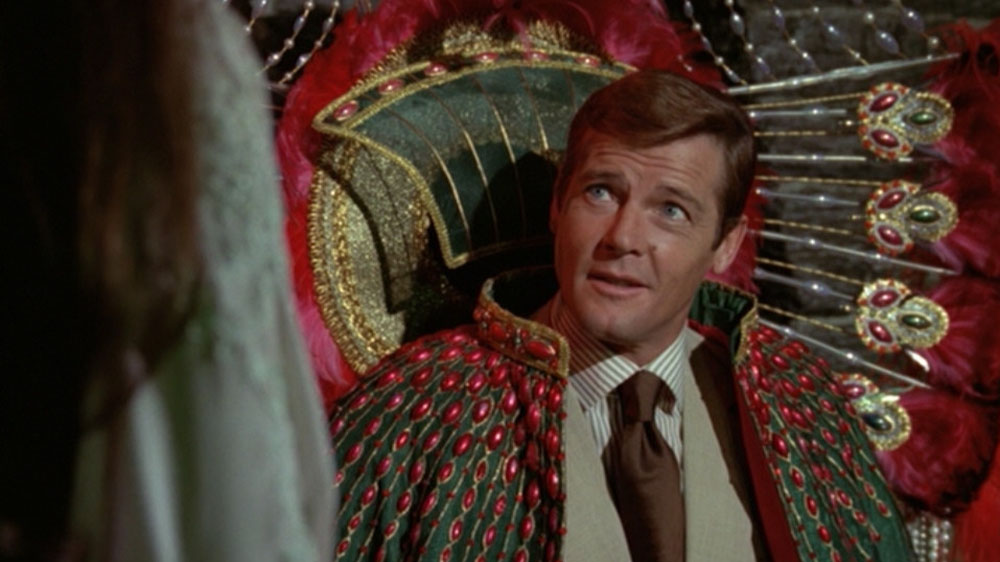 Of course it helped that his first film out of the gate took some of the best bits of the previous two (the sense of humour and fun from Diamonds are Forever, and the eye-catching locales from On Her Majesty’s Secret Service), added a passable attempt nod to Blaxploitation cinema to the mix and came up with one of the more successful and iconic films in the franchise.

Arguably it was only missing a Bond Girl as self-assured as Tiffany Case, or independent as Tracy di Vicenzo, but Solitaire at least gives them both a run for their money when it comes to ornate headdresses.

All-in-all, it’s hard to deny that Live and Let Die left Bond alive, kicking and still ready to take on the world.

James Bond will return in The Man with the Golden Gun.

What’s your favourite moment in Live and Let Die? Let us know below…