It’s 30 years since the release of Roger Moore’s seventh and final appearance as James Bond in 1985’s A View to A Kill!

Veteran (and that’s putting it mildly; Roger Moore turned 57 during the shooting of the film, making him older than co-star Tanya Roberts’ mother) secret agent James Bond goes up against frighteningly blond, Nazi-steroid-enhanced industrialist loon Max Zorin, trying to stop him flooding Silicon Valley and thus wiping out the value of the US microchip industry.

In a pursuit that takes him from the Eiffel Tower to the Golden Gate Bridge via Ascot, an airship and half a car, 007 bares his moobs in a hot tub, dispenses innuendos whilst driving a fire truck (‘Here, put your hand on this… the wheel, the wheel!’) and is awarded the Order of Lenin by the KGB, although he’s too busy starring in a steamy home movie filmed by Q to collect it.

Christopher Walken is suitably psychotic as Zorin, although the brutally casual way he murders the innocent workers at his mine is just too vicious for a Bond baddie; even Roger Moore was horrified, although not as much as by having to work alongside Grace Jones, who stars as kickboxing, horse-whispering Zorin devotee May Day.

‘I’ve always said if you’ve nothing nice to say about someone, you should say nothing,’ he remarks in his autobiography when her name is mentioned, ‘so I’ll say nothing.’

In addition to May Day, there’s Tchaikovsky-loving KGB agent Pola Ivanova, youngest-ever Bond girl Jenny Flex (to whom Bond quips ‘Of course you are’ after she introduces herself, just as he did to Plenty O’Toole) and the dismally uninteresting Stacey Sutton – a character drawn so thinly you can see through her when she stands in front of the light.

May Day’s leap from the Eiffel Tower is superb, and there’s some decent mileage in the San Francisco fire truck chase, although Bond’s cartoonish yelps of panic and the Carry On gag of the ladder knocking off an RV’s roof to reveal a naked couple in bed underneath are too panto to be excused.

It’s nice to see The Avengers star Patrick Macnee’s easy dynamic with Moore, but the scenes at the races with M, Q et al only serve to showcase the advanced age of the regular cast and the unlikely (albeit endearing) cosiness in the upper echelons of MI6. 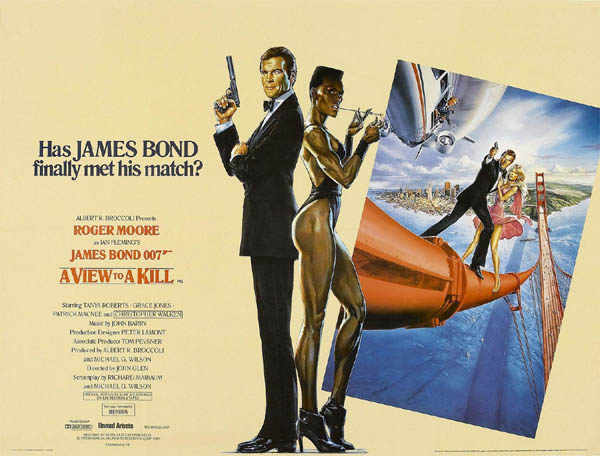 » This was Lois Maxwell’s fourteenth and final appearance as Miss Moneypenny.

» In the original script, Zorin’s plan was to manipulate Haley’s Comet into crashing into Silicon Valley.

» Two-time Bond girl Maud Adams’ uncredited cameo in a crowd scene makes her the only actress outside the recurring cast to have appeared in three Bond movies.

» For the first time, the closing titles merely state that ‘James Bond will return’ instead of naming the subsequent film.

» David Bowie turned down the role of Zorin in favour of playing Jareth in Labyrinth.

» ‘I like an early morning ride,’ Jenny Flex explains to Bond. ‘I’m an early riser myself,’ he replies.

» ‘This is no time to be discussing politics.’

» ‘Intuitive improvisation is the secret of genius.’

» ‘You slept well?’ Zorin asks. ‘A little restless,’ Bond admits, having copped off with May Day the night before, ‘but I got off eventually.’

With its dated storyline, long periods of tedium, senseless off-screen slaughter and aged principal cast, Roger Moore’s Bond swansong has regrettably little to recommend it beyond an impressive stream of entendre and a great theme tune from Duran Duran.

What do you think of A View to a Kill? Let us know below…