A third season of Inside No. 9 arrives on our TV screens this month, so let’s take a look back at its creators’ previous comedy venture, Psychoville.

Psychoville was broadcast on BBC Two from 2009 to 2011, and its run consisted of two seasons and a Halloween special. The dark comedy thriller was the brainchild of Reece Shearsmith and Steve Pemberton, two of The League of Gentlemen’s four members.

The League was full of dark humour, grotesque characters and elements of horror, all of which are also present in Psychoville.

However, whereas The League was more of a sketch-based show, Psychoville is plot-driven. Shearsmith and Pemberton have said that they wanted to create a comedy in the vein of dramas like 24 and Dexter, with cliffhanger endings and characters in whom the audience can really get invested.

What they produced was perhaps one of the most ambitious TV comedies of all time, which combined an engrossing plot with memorable characters and, of course, plenty of laughs.

Five different people receive a mysterious letter with the simple message “I know what you did.”

There’s Mr Jelly, a children’s entertainer whose clowning career has gone down the pan since he lost one of his hands. There’s David Sowerbutts, a murder-obsessed simpleton who lives with his doting mother. There’s Joy Aston, a midwife who’s a little bit too attached to the doll she uses for antenatal classes.

There’s Oscar Lomax, a blind millionaire with an unusual collection of “commodities” which he enlists the help of a young offender to complete. And finally there’s Robert Greenspan, a dwarf actor who’s become infatuated with the Snow White actress with whom he’s sharing the stage in a panto.

The first season follows the individual stories of these characters, until they eventually entwine and we find out why (and by whom) these seemingly unconnected people are being blackmailed. In season two, the characters find themselves being hunted down by a sinister organisation for information about a locket with some kind of unknown importance.

As with The League of Gentlemen and Inside No. 9, Reece Shearsmith and Steve Pemberton lend their acting talents to multiple characters in Psychoville. 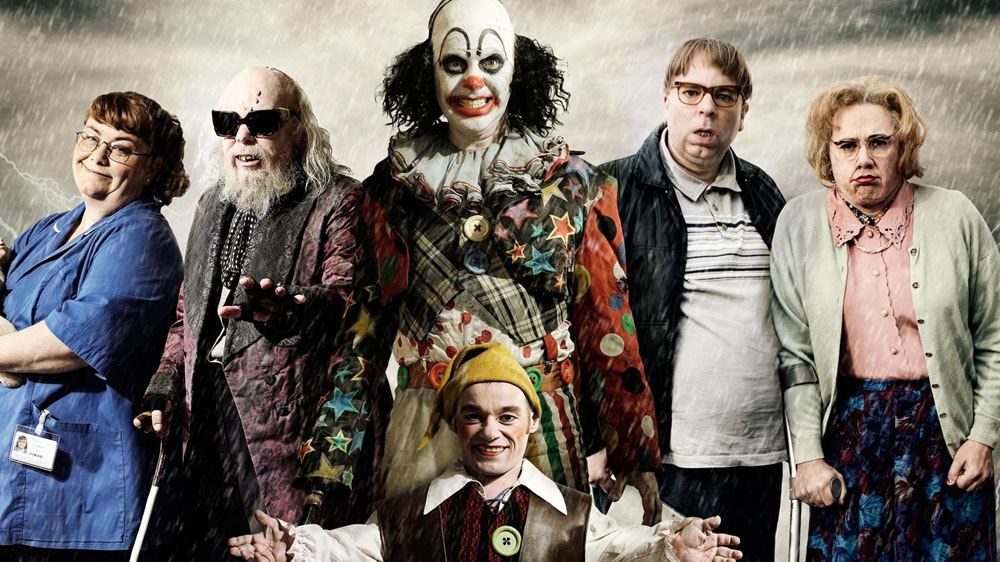 Mother and son serial killers David and Maureen Sowerbutts are standout characters who have me in stitches every time they’re on screen.

You may think that murder isn’t a topic that’s ripe for comedy, but I challenge you to watch straight-faced as the pair prepare to drown their first victim in a bath, with Maureen instructing her son to “put some Matey in for him” and then complaining that he hasn’t bothered to use hot water (“Stone cold! You can’t put him in that, he’ll freeze to death!”).

A particular highlight of the show is its fourth episode, which focuses solely on David and Maureen.

The unique ‘bottle episode’ sees events happen in real time over the course of half an hour – the whole thing was filmed in just two long takes – and has plenty of twists, turns and hilarious misunderstandings. It also earns bonus points for featuring a guest appearance from Mark Gatiss (The League of Gentlemen).

Psychoville is full of laugh-out-loud moments, quotable lines and clever references. It’s very difficult to narrow it down to its ‘best bits’ (I haven’t even mentioned the Silent Singer! Or the Superman dance! Or Biggins!), but this exchange between Joy and her husband George about their ‘baby’ Freddie (who’s really a doll) is especially good:

George: ‘What special needs? A boil wash twice a week?’

Psychoville’s second season came to an end in June 2011, and not long afterwards its creators announced that there wouldn’t be a third run.

Fortunately, a few years later the BBC commissioned Inside No. 9 from Shearsmith and Pemberton – a comedy-drama anthology series which is full of the pair’s signature dark humour and knack for storytelling.

What was your favourite Psychoville moment? Let us know below…

Utopia is cancelled after just one season by Amazon

Watch fans recreating all 166 eps of modern Doctor Who at home during lockdown!

Netflix sneaks out Lucifer 5B teaser