Huffity, puffity, Ringstone Round
If you lose your hat it will never be found
So pull your britches right up to your chin
And fasten your cloak with a bright new pin
And when you are ready, then we can begin
Huffity, puffity, puff….

During the 1950s, Professor Bernard Quatermass, head of British Experimental Rocket Group, was one of the most memorable figures in science fiction.

Created by Nigel Kneale, the superbly-named Quatermass appeared in three BBC TV serials facing off against extra-terrestrial threats to humanity. The Quatermass Experiment, Quatermass II and Quatermass and the Pit made their title character a household name and not even some dubious big screen remakes by Hammer Films could tarnish his popularity.

In 1979, Euston Films produced a fourth and final Quatermass television series, in which the now retired scientist goes looking for his runaway granddaughter – only to find London in ruins, gangs of hippies roaming the countryside looking for interplanetary salvation, and a new alien menace putting Planet Earth in peril.

Quatermass’s second biggest coup was securing Sir John Mills for the title role; the biggest was coaxing such an intriguing performance out of their veteran star.

Part Hartnell-era Doctor, part ageing Bryan Mills, part Grampa Simpson, this incarnation of the famous professor retains a little of the blustering authority from the 1950s BBC original, but it’s mostly a character study in weariness, bewilderment and despair.

His gloomy dejection is partly down to the disappearance of his granddaughter, but the sorry state of the capital – now a dystopian, decaying horror overrun with well-spoken punks, demented jobbing actors and Hunger Games-style slaughter events at Wembley – also weighs heavy on a confused old man unable to grasp the way the world has changed.

The younger, more alert but similarly grumpy John Kapp (‘Gladiators, schmadiators!’ he snarls in all seriousness at the national football stadium as they drive past) is played by Simon McCorkindale, later star of the ill-fated Manimal.

Barbara Kellerman, who would go on to appear in the BBC’s Chronicles of Narnia of the late 1980s/early 1990s, plays Claire Kapp, while there are supporting roles for Toyah Wilcox, David Yip, future EastEnders stars Gretchen Franklin and Brian Croucher, and Chris Quinten – better known as Brian Tilsley in Coronation Street. 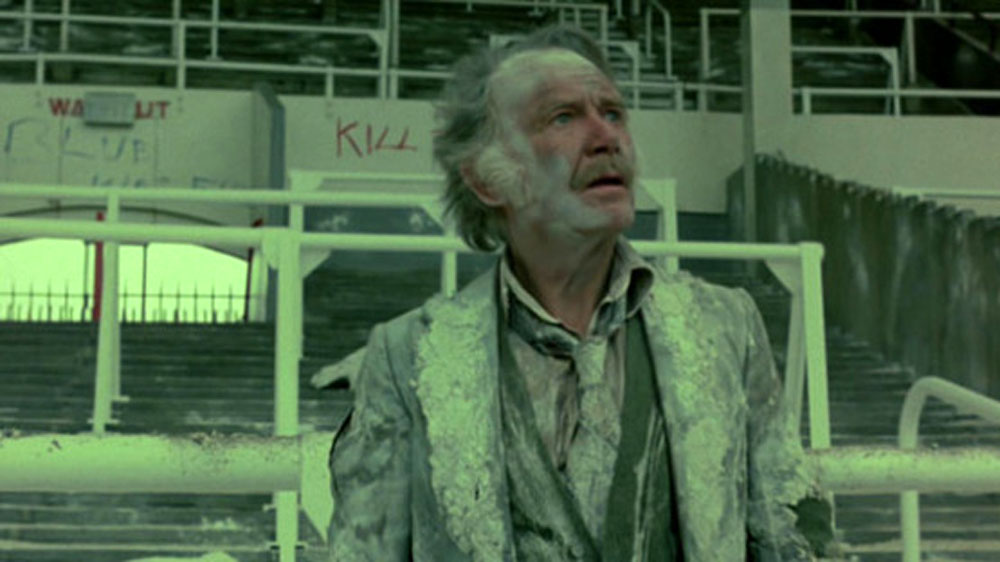 Although the special effects have dated even more horribly than concurrent science fiction dramas (the American and Russian spaceships at the beginning look like they were created for a Blake’s 7 ‘make’ on Blue Peter, while their subsequent destruction is as frightening as a kitten in boxing gloves), the extensive location filming in Quatermass retains an air of period charm.

Hindsight makes the show’s vision of the future look as old as the present, but the grainy matte scenes contrasting urban ruin with unspoilt countryside are an excellent historical snapshot of Britain at the end of the 1970s.

More anachronistic are the dubiously sexual Planet People (dangling balls in people’s faces and chanting ‘Ley, ley, ley’ is almost bound to cause some misapprehension, particularly if any of the danglees are Dylan fans) and their budget Mel Gibson leader Kickalong.

Despite failing to convince as individuals, collectively they provide some of the better moments of the series: the disappearances in the megalithic stone circle at Ringstone Round and later mass harvesting at Wembley are chillingly effective.

New age travellers being blasted to dust could almost be a metaphor for the changes in perception of the counterculture that were to come in the following decade, while the heavily downbeat ending is a forecast of a bleak future all round. The moral? Life goes on … but at a price.

Quatermass was produced in two separate formats: a four-part television show (broadcast on ITV in 1979 as the first primetime offering following a colossal 75-day strike by technicians) and a 100-minute film designed for cinematic release.

Reviews at the time were decidedly mixed and even those involved were not hugely impressed: Nigel Kneale was very disappointed with the realisation of the story, preferring his own novelisation of the scripts; producer Ted Childs thought it compared unfavourably with the big budget Hollywood movies its audience was used to; executive producer Verity Lambert thought it compared unfavourably with itself. In her opinion, trying to top the original 1950s version was futile. It’s a wonder the thing ever got produced at all.

Thankfully, it did. Quatermass may drag like half a dog and be in dire need of an injection of humour, but three decades of perspective have cast it in a better light than initially perceived. Yes, history has demonstrated that Nigel Kneale’s world-gone-to-cock pessimism actually underestimated how bad the future was going to be, but his realisation of slow apocalypse was actually pretty entertaining.

The anti-hippy (i.e. anti-young people) preaching still jars and there’s no doubt the ‘atmospheric’ pacing remains tedious, but for those who like their vintage British sci-fi served black, this is about as dark as it gets.

Quatermass is out now on Blu-ray from Network.

> Buy Quatermass on Blu-ray on Amazon.

What are your favourite memories of Quatermass? Let us know below…