Beware spoilers if you haven’t seem the first 10 episodes of Star Trek: Prodigy!

In the UK, the first half of Star Trek: Prodigy’s first season aired in late April/early May on Nickelodeon. It’s now also available to stream on Paramount+.

The show is the franchise’s first to be squarely aimed younger viewers. The story saw a ragtag crew of young aliens commandeer a derelict Federation starship. However, the U.S.S. Protostar came equipped with a familiar face – that of Kathryn Janeway (of Voyager fame) in holographic form. 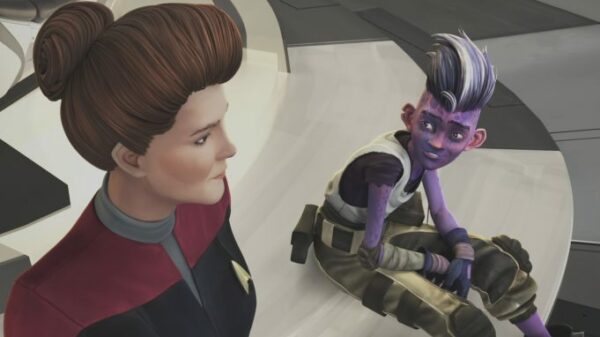 Now, prior to the launch of season one’s remaining episodes (the show’s already been recommissioned) creators Dan and Kevin Hageman, and creative lead Ben Hibon, have spoken to CBS Interactive’s ComicBook about what fans can expect next.

Dan Hageman talks about the threat, with Starfleet and the real, rather than holographic Janeway now in the mix:

“In the first 10, the threat very much is the Diviner, and what we established at the end of 10 is you have the threat of the actual Starfleet and Adm. Janeway on their tail to stop who she believes to be people who have stolen Capt. Chakotay’s ship. So that’s a very formidable foe. I wouldn’t want to face her.”

“… we’re constantly putting on the two different hats. One is, ‘Well, how do you market P+? How do you market to the whole family, including adults?’ And then, ‘How do you do this for kids?’ And so in every aspect, we look at Janeway. There’s the adult fan who loves Janeway and oh, now she’s a hologram, oh, now Adm. Janeway’s back and there’s all this fun stuff and making sure we service that audience.”

“But then now it’s so exciting to go to Nickelodeon where this is basically a kids’ audience, right? That’s what we’re really hitting now. What are the kids’ points of view? How do we make sure that hologram Janeway is interesting for them so that you don’t need to know the backstory of who she is? And what I love about hologram Janeway for kids and I think for Nickelodeon is it brings back Mary Poppins in my mind, and Mary Poppins was wonderful. There were a bunch of latchkey kids at home or kids that had these issues at home, and she came in and she was very, very strong and disciplined but she was so charismatic that you just love her and you want her around, and I’m hoping for kids on Nickelodeon that they’re going to appreciate her in that light.”

“In terms of Kate [Mulgrew], who did a wonderful job of doing that in the first part, in what we’re showing now, there’s obviously the introduction of other versions of her, and her range and her moments with the other cast of the show keeps on expanding, getting more colorful and more interesting and more fun, in some ways, I think, certainly from her perspective.”

With the show now also available on Paramount+ in the UK, we haven’t been able to confirm if it will still air on the linear Nickelodeon here too. We’ll keep you posted.

As well as that second season, Star Trek: Prodigy also has a game in the works too called ‘Supernova’. It’s coming from Outright Games, in association with Tessera Studios, Paramount Consumer Products and Nickelodeon.

After the U.S.S. Protostar picks up strange readings from a dying star, Dal and Gwyn must race against time to save their friends, their ship, and an entire planetary system before a supernova destroys them all! Using their unique skills to overcome ingenious puzzles, endure hostile environments and battle deadly robot armies, Dal and Gwyn must save their captured crewmates Jankom Pog, Rok-Tahk, Zero and Murf. But they soon encounter a deadly new enemy, one that will stop at nothing to destroy the U.S.S. Protostar and change the very course of history!