The latest chapter from The Book of Boba Fett landed on Wednesday 19th Jan. In the run up, Sophie Thatcher gave a great interview to Brian Davids of The Hollywood Reporter.

With her career blowing up at the moment, it covers both her role in Yellowjackets – the 90s set plane crash survival show – and in The Book of Boba Fett. From it, we learned a few snippets, such as what the audition process was like:

“So I read the character description and they let me improvise a little bit. They asked me to do my standard American accent and then a British accent. And they chose my British because I think it worked well with Jordan [Bolger, who plays Skad]. I also think the British accent feels a little less modern, because I feel like I talk in a very modern way, normally, with my American accent. So I think that’s why they chose the British, but it was fucking scary because I didn’t have an accent coach.”

She also talked about how the effect for Drash’s droid arm was created:

“Green sleeve, yeah! We experimented a bit with it. They had makeup and prosthetics, and then they decided they didn’t like that. They started off with a thicker arm, and then decided it looked cooler as it is. So I love the way it turned out, but I had a green sleeve on the entire time. I was really curious to see how it would turn out, and it looks really cool.”

And in terms of the look of the character, writer John Favreau gave her a cultural touchpoint:

While she was tight lipped on Drash’s future, she did say “You can assume my character might be in more stuff” before adding “Yeah, I don’t disappear. I don’t even know if I’m allowed to say that.”

The Hollywood Reporter also ran coverage of the Television Critics Association Winter Press Tour, where Temuera Morrison (Boba Fett) and Ming-Na Wen (Fennec Shand) were asked about apparent controversy related to the show. Apparently the massacre of the Tuskens in Chapter Three has drawn criticism online, after the lengths the show has gone to develop their culture. Temuera Morrison talked about infusing those scenes with “a bit of ceremony” and that he had drawn from his own culture. 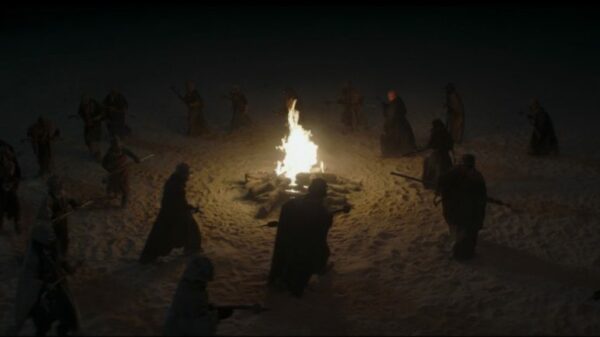 For her part, Ming-Na Wen added that the Tuskens had been given an enriching backstory. She also pointed out that their ultimate fate was in totally keeping with the movies, saying:

“… whether it’s the Jawas, when they were attacked, there is this ceremonious desire on Tatooine to burn the bodies as opposed to letting them lie out in the open in the desert.”

With a title like The Gathering Storm, we expected further ante-raising rather than all-out conflict. What we didn’t anticipate was for the story to join the dots, bringing Boba’s bacta fueled flashbacks up to the present day. Hooking up to what we saw (or rather didn’t see) in The Mandalorian, Boba saved Fennec and recruited her to his cause.

It also addressed his continued need to bathe in the healing fluids of a Bacta tank. Nothing to do with his cloned origins as we had guessed, but to heal the deleterious effects of the sarlacc. With Boba healed and the flashbacks concluded, will the show remain in the present day from this point forward?

On the subject of his cause, it seems Boba’s desires stem primarily from wishing to be his own boss; his time with the ill-fated Tuskens gave him a taste of community. If that’s really it, it’s an understandable enough motivation, but we had hoped for something a touch more noble. Although maybe that’s a stretch for a bounty hunter.

On reacquiring Slave One  his Firespray gunship, there was a settling of the score as the speeder bike gang were taken out from above. Swift justice indeed. Despite its monstrosity, we did feel a twinge of pity for the sarlacc though. It may have been to save their lives, but the creature has been part of Star Wars lore since 1983!

So at the conclusion, with a fragile peace brokered, Boba remains where he was – waiting for the Pykes’ first move. And was that final line a suggestion that a certain shiny-helmeted ally will be making an appearance?

The Book of Boba Fett continues on Disney+ with Chapter Five on Wednesday 26th January 2022.