Game of Thrones, HBO’s fantasy drama based on the bestselling novels by George RR Martin, returns to Sky Atlantic tonight for a fifth season.

CultBox caught up with Welsh actor Iwan Rheon for an exclusive chat about playing the evil Ramsay Bolton, his new album and the return of ITV sitcom Vicious…

So, Game of Thrones is back. When we last saw Ramsay he’d just been legitimised by his father. Can you tell us about what’s next for Ramsay in Season 5?

“Well, you sort of get to see how he deals with his new power, which he quite enjoys, obviously! You know, being legitimised for him was kind of such a huge moment in his life because it’s his father finally giving him some responsibility and bringing him into the family, which he’s wanted for so long.

“It’s kind of really a relief more than anything, and obviously he tries to act a bit more lordly, more you know like a young lord, but unfortunately the real Ramsay always shines through!”

Will there be any more flaying from him this year?

“Well, I mean one thing you can guarantee with Ramsay is there’ll always be a bit of flaying going on!”

“Yeah, he loves a bit of flaying.”

This is your third year doing Game of Thrones; how are you finding the experience?

“It’s great! Yeah, I mean it’s quite a strange show to be involved in because of the size of it and because you’re kinda coming in and out of Belfast, or wherever they’re shooting, I’m always in Belfast and you don’t sort of bump into people, you don’t meet everyone.

“Only occasionally at, for example, the premiere that was on the other day. You actually meet a lot of the members of the cast, you’re kind of like ships in the night really, but I’m really lucky I’ve got this fantastic character to play. He’s really interesting and he’s got loads to him. The scripts are written fantastically so I’ve got these great lines to say – it’s pretty cool!”

Are there any locations you’d most like Ramsay to go to? 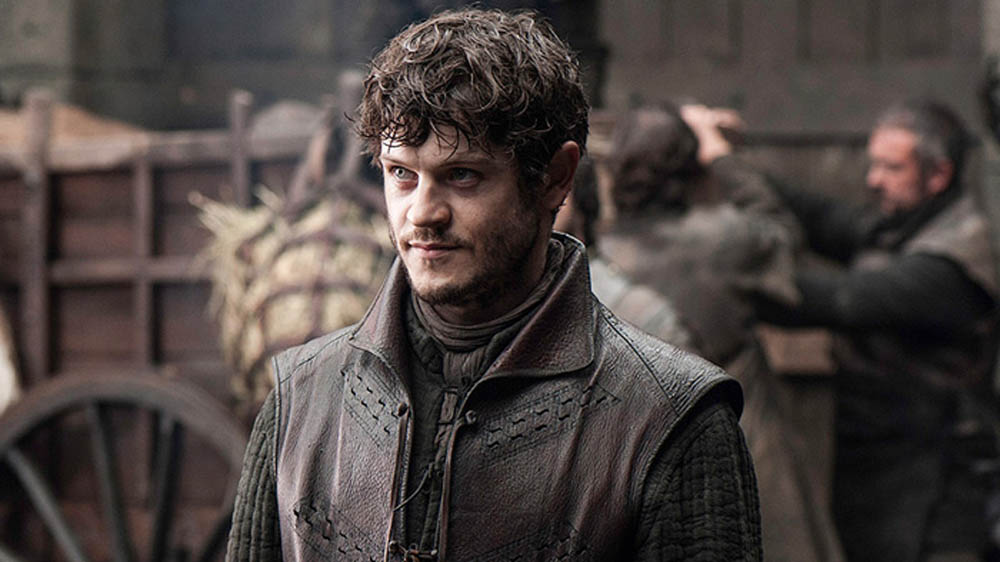 “Well, I think it would be quite nice if he popped down to King’s Landing, so I could go and film in Croatia for a couple weeks or maybe Dorne? Yeah, I don’t mind at all, Belfast, it’s cool working here.

“It’s going to work at the end of the day and there’s some really nice restaurants, some good, nice bars, so it’s kind of a cool place to be really, but obviously it’s nice to go filming in warm locations.”

Could you imagine Ramsay sitting on the Iron Throne at all?

Probably not, no! Obviously a lot of characters in the series tend to meet quite grisly ends. How would you like Ramsay to depart the show?

“I think something dragon related, I’d be pleased with. Yeah.”

That would be quite spectacular!

“Yeah! I think that’s the kind of gruesome, horrible death that he potentially deserves!”

Do you think he could ever be redeemed?

Yeah, maybe just possibly there! As a character he’s quite different from some of your other roles such as Simon in Misfits. Do you enjoy playing a slightly more villainous character?

“It’s a very different thing, you know? Simon was very introverted, so everything… all his emotions and feelings were all kept inside and you know it’s sort of like a build-up and it’s a weight with it inside and that in a weird way is more difficult. It’s more tiring in a way to play because it’s kind of more inside, nothing gets released – so as with Ramsay, it’s the opposite, it’s everything is released, he’s happy, he loves doing what he’s doing. And that’s kind of the key to him, I think.

“The joy he feels in everything, in all the horror that he creates. So, although it has its own challenges, it’s less sort of emotionally draining. I always like playing a variety of roles, I don’t think I’d rather play either one. It’s nice to get to do both!”

I see you’ve got a new season of Vicious coming to ITV later this year?

“Yeah, I think so! I’m not sure exactly when, but yeah we’ve filmed it so I think they’re probably busy with post-production at the moment.”

Is there anything you can tell us about the second season?

“Well, I think it’s kind of… it’s better. You know, I think it’s all really settled this year and I think Gary’s written some fantastic scripts.

“I think as far as I’m concerned, it kinda feels a bit more like Ash is now a part of the family because I think at first he was kinda just getting involved but now he’s very established in their group. Yeah, it still carries on and just gets funnier! There’s a lot of very funny scenes!”

What’s it like working with Sir Ian McKellen and Sir Derek Jacobi?

“It’s amazing! Yeah, it’s great, I mean in every way, in every sense you know they’re two professionals and gentlemen and inspiring people to work with. It’s so inspiring for a young actor to sort of work with these people who’ve had such fantastic careers and are legends within our world.

“They still have the sort of hunger and drive to carry on. They’re not coasting, they’re still showing the same level of commitment and hunger as they did on their first job, I’d imagine! It’s really cool to see and how they, you know, treat everyone with such respect. There’s none of this starry bullshit. It’s a real honour to get to work with them.”

I can imagine! How different do you find doing a sitcom to a drama, such as Game of Thrones?

“It’s incredibly different in every way. First of all because sitcom is more geared to performance as it’s sort of a live audience show. It’s kind of more towards a theatrical way of performing, I guess because of the medium.

“Everything’s shot on multi-camera so you rehearse all week and then you do the show at the end of the week, whereas obviously with Game of Thrones it’s a constant filming process where you go through scene to scene to scene and then you could be filming a scene which will last, you know, five minutes on screen and it takes all day.

“Yeah, which I really like doing because you really get the fine details whereas something like Vicious is much more where you rehearse the same scene to get it right then you perform it at the end of the week. So it’s a very different discipline.

“It’s totally different and obviously comedy has its own challenges. Especially when you’re in front of a live audience. I love it. This year I was literally filming Game of Thrones and there was a slight overlap with Vicious. So I was in both the worlds and it was such a bizarre kind of experience but it was really cool! So I got to, you know, play Ramsay on a Wednesday and Ash on a Thursday and Ramsay on a Friday. It was pretty cool!”

Gotta make sure you don’t get them confused, maybe!

“Yeah that would be a bit scary…”

It might make for quite a different episode of Vicious!

“Yeah, but as Ian pointed out to me: ‘Don’t worry darling, you’ll have your costume and we’ll all be here…’ I think he said that jokingly.”