The second season of Bridgerton arrived on March 28, and in the first few weeks of release is breaking several records for Netflix and looks set to beat season 1. Thanks to the Netflix Top 10 site we can bring you all the numbers. While we wait for the Nielsens to catch up, we can admire the success so far.

The series had 115.75M hours viewed on the English TV list, appearing in the Top 10 in 91 countries, making it the most viewed title for the third week in a row. The season also entered the Most Popular list at #3 with 560.50M hours viewed

More interesting still is the #1 show on the list — Bridgerton season 1 with a total of 625.49M hours in the first 28 days. Season 2 had been out for 17 days when these figures were collected. Even if the next week’s data shows a large drop, we still expect season 2 to garner a minimum of 75M hours, taking it to #1 on the list. With further seasons to come (eight in total) and the Queen Charlotte spin-off, we at CultBox foresee a time when Bridgerton needs its own Top 10!

Here’s a handy table for the Top 10 shows in their first 28 days on Netflix as of April 10: 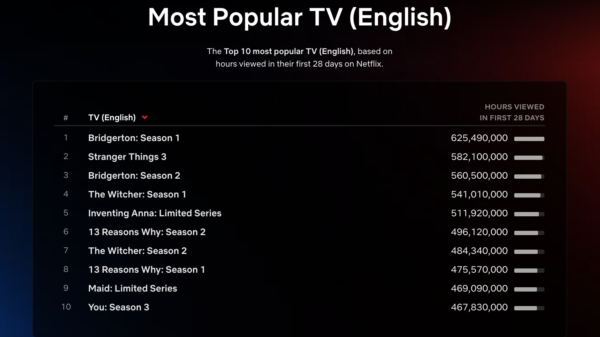 We’ll keep you posted on next week’s numbers when we get them.