All change this February on Disney+ as the new Star brand brings a host of new content, the catch is subscriptions are rising as well

February is a big month for Disney+. From 23 February the streaming giant adds a vast amount of new content via its Star brand (as we reported here). While it may be argued they need more content of more diversity, everything comes at a price. Subscription fees are rising (as we reported here after the big shareholder briefing announced an array of new Star Wars content, and more). What does this all mean?

We suspect most Disney+ subscribers are still in their honeymoon period, and few will be driven away by the price hike on day 1. They may still be catching up on The Mandalorian or just keen to see the next episode of Wandavision [did you see the latest?!] On this basis, most subscribers will be offered the choice of a large number of new titles. What does that mean in practice? Let’s start with the Disney+ page where they introduce Star (here). 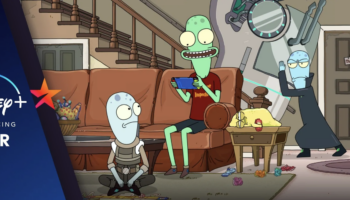 The introduction kicks off with:

Love, Victor — the series follows Victor, a new student at Creekwood High School on his own journey of self-discovery, facing challenges at home, adjusting to a new city and exploring his sexual orientation

Big Sky — Private detectives Cassie Dewell and Cody Hoyt join forces with his estranged wife and ex-cop, Jenny Hoyt, to search for two sisters who have been kidnapped by a truck driver on a remote highway in Montana (we have more on this here)

Helstrom — Daimon and Ana Helstrom are the son and daughter of a mysterious and powerful serial killer. The siblings have a complicated dynamic as they track down the terrorising worst of humanity

Solar Opposites — centres around a family of aliens, Korvo, Terry, and their child-replicants Yumyulack and Jesse, from planet Shlorp who crash on Earth and must take refuge in middle America

After the new Originals, we have TV series and specials. A mere 57, starting with According to Jim (8 seasons) and ending with 9/11 Firehouse. It includes Alias (seasons 1-5), Bones (12 seasons), Buffy (7 seasons), Grey’s Anatomy (15 seasons), Scrubs (seasons 1-9) and The X-Files (seasons 1-9). We notice a lot of overlap of content with Amazon Prime in the UK.

Then there’s movies. A mere 228 of them. We said it was a big list! A very small sample includes Another Earth, Cleopatra, Deadpool 2, Good Morning Vietnam, The Maze Runner, Primeval, Spy Hard and 9to5.

If you want the full list, it’s a five page PDF file you can grab here.

What about the cost?