It’s a popular consensus that the former is Steven Moffat’s style, defined by intricate puzzle-box plotlines and mind-bending hard sci-fi concepts, and the latter is Russell T Davies’, defined by grounded and relatable characters and big emotional payoffs. That’s not untrue, and it can be a helpful guide for delineating between the two. But as ‘The Doctor Falls’ shows, it’s not a line that can be drawn so cleanly.

This is a season finale designed to make you feel. It hits you in the subtle moments of dialogue between characters who intimately know each other’s secrets and fears. It hits you in the episode’s emotional peaks, where familiar faces are put to a bitter and shocking test that reveals who they truly are. It hits you in the action scenes, with the explosions that feel just a little more Hollywood than normal. And it hits you, finally, with a cliffhanger ending that offers up an irresistible premise, and then holds it off until Christmas.

You may have liked, or disliked this episode, loved or hated it. But I’m wagering that, no matter your view, it made you feel something. And that has to be a mark in its favour.

‘The Doctor Falls’ is an interesting season finale because it’s at once a familiar continuation of Steven Moffat’s divisive approach to finale episodes, in its decision to take a hard left turn from the previous instalment’s cliffhanger, and a very significant departure for him. In respect of the latter, it’s notable that ‘The Doctor Falls’ feels a lot simpler and more pared-down than ‘Hell Bent’, or ‘Death in Heaven’. For all the explosions and bombastic talk of a final stand, it’s unashamedly intimate, and very linear after flipping the concept of a Master vs. Doctor episode on its head in those opening minutes.

Speaking of the Masters, they occupy a surprising place in ‘The Doctor Falls’. It’s abundantly clear from the start of the episode that they’re going to be a fun pairing – the cool, unrepentant menace of Simm’s Master, whose greater restraint makes him more compelling versus the volatility and quietly empathy of Gomez’s incarnation, but they don’t play the role one might expect. Like in ‘The Magician’s Apprentice’, the episode sketches out a familiar arc of the Doctor and friends versus some monsters, and then drops his arch-enemy into the middle of it. It’s easy to feel a little frustrated about this, on a visceral level. John Simm’s return was so heralded you’d assume he would have to be pivotal, and the narrative arc of this season has been predicated on Missy’s will-she-won’t-she redemption story, so the fact that they’re supporting characters, utterly uninterested in the main conflict at hand, seems a little odd.

But then again, it’s a matter of perspective. The Masters might be underwhelming in terms of their villainy, but they do serve a very specific purpose here – they’re a cracked mirror image of the Doctor, a dichotomy between evil and something more unstable. Their elevated perspective, as fellow Time Lords, is necessary to magnify the Doctor’s selflessness in giving his life for the humans of Floor 507. Likewise, there needs to be two of them to make this story work; Simm’s Master is the id, utterly without redemptive qualities and therefore the polar opposite to the Doctor’s super-ego, while Missy’s unconscious empathy makes her far harder to pin down, and therefore a living reminder of the good that can come from seemingly irredeemable evil. The way in which they’re written out of the episode is somewhat abrupt, but redeemed by the fun poetic value of the world’s greatest narcissist consuming his/herself. The Doctors’ meeting in ‘The Day of the Doctor’ ended in sincere words and tea. As his designated opposite number, of course two Masters meeting would end like that. It’s a sad way for Missy to go, but her attitude change in the end encapsulates the episode’s theme that anybody is capable of kindness; a fitting end to her inner battle across the season.

And then there’s Bill. ‘World Enough and Time’, despite the dramatic power of its gut-punch in Bill’s conversion, left this episode between a rock and a hard place with her. If she was resurrected, it would be a cop-out, and if she stayed, it’d be a sad and nihilistic end to a lovable companion. To its credit, ‘The Doctor Falls’ does its best to toe the line. The device of using Pearl Mackie to represent the imprisoned Cyber-Bill isn’t original, but it serves ‘The Doctor Falls’ very well. It has the benefit of using Mackie’s impassioned, emotionally fraught performance as she struggles with her new fate, and allows her character arc to feel more visceral as she flickers between human and machine. Her scenes with Peter Capaldi are an excellent reminder of why this TARDIS team worked so well together – two very different people who nonetheless trust each other unequivocally, even if it means standing together into death.

Her fate, I’d imagine, might be this episode’s most polarising element. In a lot of ways, it’s a very satisfying way to leave her character. Her reconnection with Heather is a rewarding bit of circularity that smartly picks up on a loose thread from ‘The Pilot’, and the way in which Bill’s sexuality is brought to the fore as she gets to connect with Heather in death undoes a lot of the uncertainty over Doctor Who perpetuating tired tropes that I raised last week. I, and a lot of other people, connected with Bill. She gains back the agency she lost last week, and gets to apply the lessons she learned with the Doctor with the woman that got away, and that should be right.

But it can’t help but feel a little off. It doesn’t really come across as the episode’s natural conclusion dramaturgically, as so much of the focus on her gradual transformation into a fully-fledged Cyberman goes out the window. And while Heather’s rescue methods were set up in ‘The Pilot’, there’s no reminders of her here, or foreshadowing other than a vague thematic through-line about tears. Coupled with the way in which she instantly shows up at Bill’s lowest moment, and Bill’s fate has all of the makings of a deus ex machina. This is far from a unique flaw – virtually every finale, including RTD’s, has done something like this (and, given the history of Meta-Crisis Doctor or the-Doctor-as-Jesus, it’s not the worst example either), but it’s a frustrating narrative shortcut nonetheless. In a final act where everything clicks, it’s the one big development that elicits a ‘huh?’ when we should be enjoying Bill’s exit. It’s a problem of execution, not concept, but it can’t help but mar a well-planned send-off for a companion nonetheless. 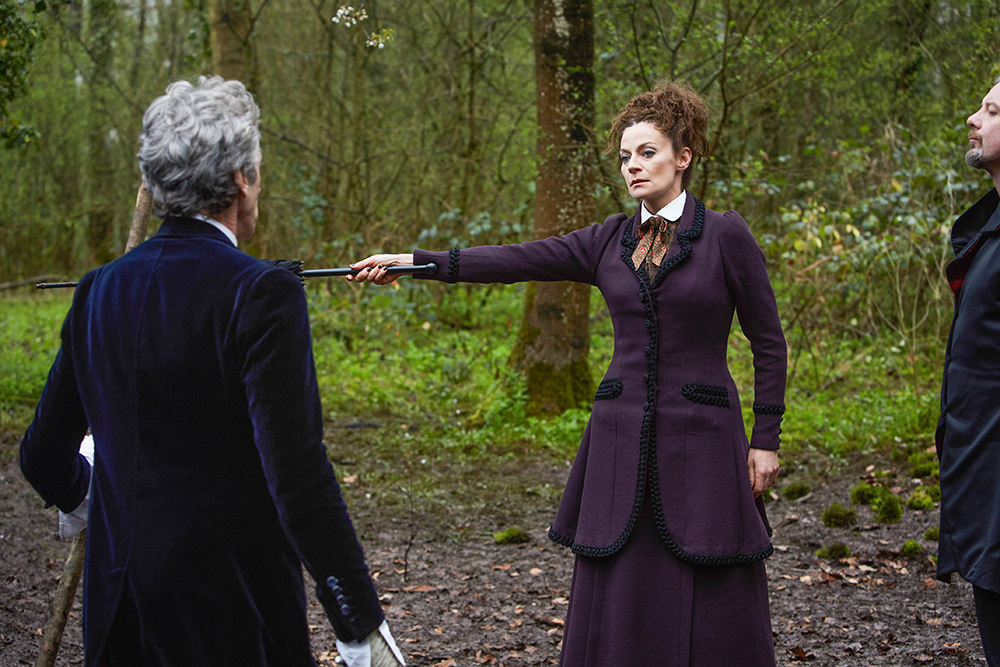 At the centre of it all is the Doctor. With the notable exception of Bill, whose journey, thankfully, exists on a parallel track, everything comes back to him. This is his last stand after all, with all the portentous hallmarks of a regeneration episode. In short, the Twelfth Doctor gets a chance, in death, to tell us who he was in life. So, what does ‘The Doctor Falls’ tell us about this Doctor? Well, he’s remarkably persistent, shutting off a regeneration four or five times out of sheer force of will. Like every Doctor, he’s kind and selfless, doing what the Eleventh Doctor did before him and putting everything on the line for a small town of strangers. And, most of all, he’s a fighter. Each of those aspects gets a fantastic and stirring showcase at one point; his persistence shown by his obstinate refusal to stay dead, his selflessness shown by his impassioned speech to the Masters, and his fighter qualities shown by his last stand in the woods with the Cybermen (a fantastic set-piece that reuses the ‘Breaking the Wall’ music from ‘Heaven Sent’, a track that captures his character so well that it feels like a better theme from his original one).

Oh, and Peter Capaldi gets his chance too. It’s early to call time on the Twelfth Doctor – he’s still staving off the change as the episode ends – but ‘The Doctor Falls’ is a wall-to-wall showcase for Capaldi’s talents in a way a final episode can only offer. His Doctor may not have been the commercial success that Tennant and Smith’s incarnations were, and some have accused his era of suffering from poor writing. But no-one can doubt that Capaldi is one of the very finest actors to play the Doctor. He’s as good as he’s ever been here, running the gauntlet of emotions that make up the Twelfth Doctor’s character whether that’s furious, passionate, funny, frightened, despairing or denying. This might all seem like hyperbole, but it’s a bitter shame that we only have one episode left with him. Compared to Tennant and Smith, whose time in the TARDIS felt longer, it feels like only yesterday that Capaldi stepped out on that weird live special, despite the fact that it’s four years ago now. With the announcement of the Thirteenth Doctor presumably coming down the pike, it’s a reminder of just how high a bar he or she (I’m still holding out) will have to clear.

It’s that part of the review where I have to qualify my praise. ‘The Doctor Falls’ is a thrilling and satisfying season finale, but the issues I’ve raised with it are significant. It’s not as intricate in its construction as its predecessor, with the slight messiness of the Master’s role, or the extraneous feeling of Nardole’s otherwise diverting subplot, or the awkwardness of the opening section’s flash-forwards and flashbacks. But it is a significant improvement on Capaldi’s other season finales, matching their emotional resonance while delivering a more coherent and better-structured story. In its own messy, unashamedly heartfelt, nostalgic way, it’s the ending this season deserved, reflecting what’s made the Twelfth Doctor’s final season a rewarding end of an era.

But Doctor Who never really does end. Every ending is just a beginning in disguise. The Twelfth Doctor will give way to the Thirteenth. Bill’s adventures with Heather have begun. Nardole has a colony to look after. As many loose ends are tied up here, it’s ultimately an episode of rejuvenation, of a cycle coming back to its starting point.

How fitting then, that ‘The Doctor Falls’ ends not with that flash-forward from the previous episode, but a figure striding out of the snow straight after that. A man in a coat and hat, who insists he’s the Doctor. The original version, played by a different actor to the last time we saw him, who was played by a different actor the time before that.

Christmas Day. The Twelfth and the First Doctors ending, and beginning together. See you then.