Al Murray’s Great British Pub Quiz has been picked up by Quest, with the Freeview channel agreeing to produce 21 hour-long episodes of the comedian’s trivia series.

Although this new series is not believed to feature Murray’s famous Pub Landlord persona, it’s clear that everyone involved wants to riff on the link between this comedian and the great British pub.

Murray said this about the announcement:

“It’s very exciting to be putting the Quest into Question with the Great British Pub Quiz. You’re going to see some of the finest quizzing minds in the country duking it out as well as the most knowledgeable barman on the planet, Shaun Williamson, do his quizzing thing.”

And Simon Downing from Quest added this:

“Al Murray’s Great British Pub Quiz marks Quest’s first move into comedy entertainment formats as we seek to broaden the channel’s appeal. With Al’s legendary comedic talent, this is a fresh take on a game show that apes traditional pub quizzes and has great potential to excite Quest fans and engage new audiences. It comes on the back of an exciting year for Quest where ratings have reached record highs and we’ve diversified our schedule with the EFL highlights.” 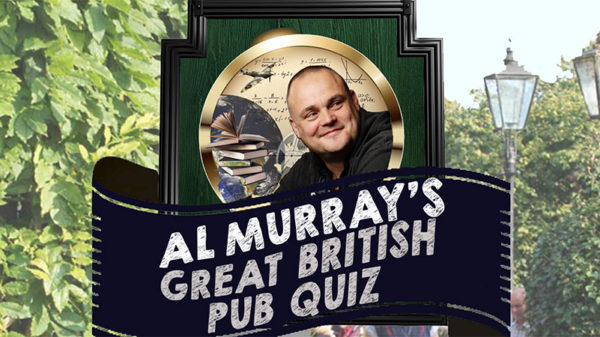 Back in July, production company Avalon produced a pilot episode for the series, putting a call out for audience members on Eventbrite and teasing a little of what viewers can expect from the experience:

“Join Al Murray as he turns real ‘pub landlord‘ to host a pilot for a TV pub quiz show, filmed in front of a small audience (not for broadcast). There’ll be special celebrity guests, lots of fun games and challenging questions – and you may even get a chance to join in with the quiz!”

Clearly, the pilot episode went down a treat. British Comedy Guide reports that Quest has “significantly invested in the format” with plans to begin airing episodes in 2019.

Murray previously hosted the quiz shows Fact Hunt (for ITV) and Compete For The Meat (for Dave). A celeb-stuffed pub quiz sounds like a perfect set-up for Murray, so here’s hoping for a highly enjoyable series.