Black Mirror season 5 is getting an injection of comic book movie star power, with both Anthony Mackie and Yahya Abdul-Mateen II joining the cast of Netflix’s sci-fi anthology series. Here’s everything we know, including the first image of these stars in action…

Deadline Hollywood broke the news that Anthony Mackie and Yahya Abdul-Mateen II have joined the cast of Black Mirror season 5. No details about their characters have been revealed, though. And it’s also unclear if they’ve been cast in the same episode. Basically, we have nothing to go on here, besides both actors’ sterling reputations.

Oh, and we also have this first-look image, courtesy of Entertainment Weekly… 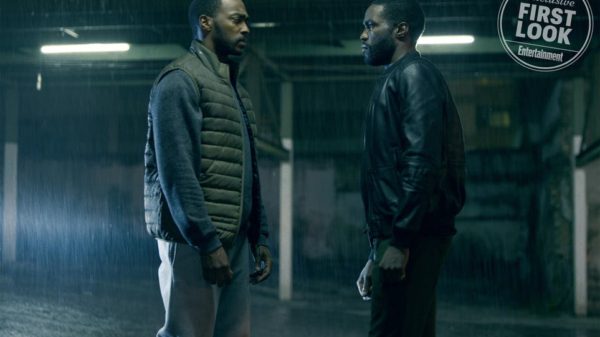 Anthony Mackie is known to superhero fans as Sam Wilson, aka Falcon, Captain America’s trusty winged pal from the Marvel Cinematic Universe movies. Yahya Abdul-Mateen II, on the other hand, recently made a real splash with his villainous turn as Black Manta in the Aquaman movie.

Both of these actors have other tricks up their sleeves, as well, besides the superhero movie antics: Anthony Mackie has previously been seen in such straight-up dramas as The Hurt Locker and The Hate U Give, while Yahya Abdul-Mateen II has appeared in The Greatest Showman and The Get Down.

Both actors also have exciting stuff in the pipeline: Anthony Mackie is set to take the lead in Altered Carbon‘s next season, as well as having numerous movies in various stages of production; and Yahya Abdul-Mateen II has nabbed a role in the Watchmen TV series.

As we hear more about Black Mirror season 5, which doesn’t have a release date yet, we’ll be sure to keep you posted.