The BBC’s electric thriller, Bodyguard barrels into its fourth episode as it explores the aftermath of the latest bombing…

There was something very Line of Duty about this week’s episode of Bodyguard. From the oodles of interior police station scenes to the suspicious, telling absence of Keeley Hawes to the shady stairwell conversations, this week Jed Mercurio decided to take a step away from both the political intrigue and riveting action that has defined the series thus far.

We may have moved on from flinching every time Keeley Hawes turns a corner but Mercurio and incoming director John Strickland (who was, fittingly, seasoned on Line of Duty) don’t let up. At this point it’s silly to be surprised but even when the main character is out of commission, there’s so much to unpack here.

For starters, Julia is dead. Part of me rolled my eyes when she went flying after her disastrous speech at St. Matthews’ College (although at least the lettering behind her didn’t fall down) but it really seems like that’s the end of Home Secretary Julia Montague. Mercurio has done his best to convince us of such but I’m not entirely buying it.

It’s just a little too early to say goodbye to Julia and given her obviously vast web of connections and schemes, her faking her own death isn’t quite beyond the pale here. Given the threat on her life it would make sense as well as giving viewers a real sucker-punch next week and allow her to stage a dramatic Jesus-style bid for the Tory leadership.

But for now, Julia Montague has bit the dust and the full responsibility of shouldering the series has been handed over to Richard Madden. It’s not said enough but Madden is as good here as he ever will be; it’s a consummate turn by a terrific actor. By now we could all probably draw every crease, line and frown in his face from memory, such is the curiously intimate intensity of Madden’s performance. 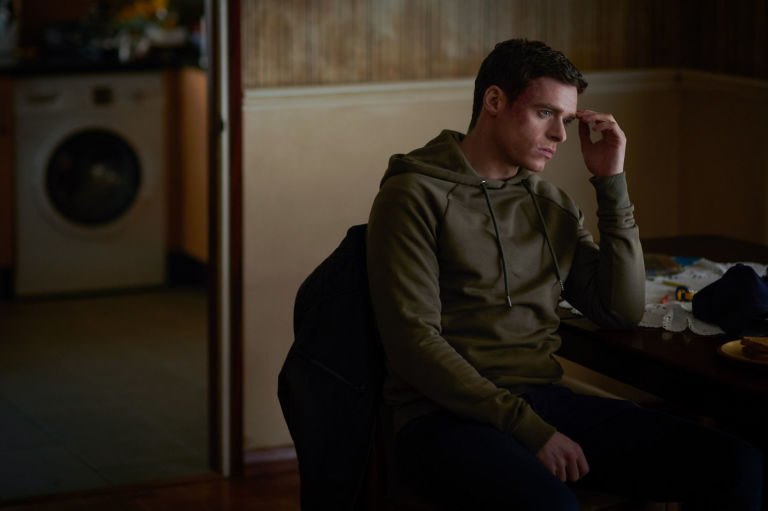 Episode four took its sweet time mulling over the events of last week and rightly so. An apparently successful assassination attempt on the Home Secretary deserves a full hour and then some to be picked apart. We got to learn more about the water-treading Home Office, now headed up by Mike Travis (played by the always strong Vincent Franklin), who currently has worst job in the world, and also meet Nina Toussaint-White’s DS Rayburn.

Rayburn is a great foil for David, a canny detective sergeant who can see straight through his remarkably brave façade and the damaged man underneath. Going forward I imagine she’ll be a huge advantage to discovering what happened to Julia, what’s going on in Britain currently and what David’s role in all this is. It certainly helps that Toussaint-White is excellent value.

With Julia out of the picture the finger of blame now points in David’s direction. Despite Bodyguard working overtime to convince us of his guilt, there’s most likely some truth to it. There’s no way that David could be this deep into one of the greatest political quandaries this fictional universe has ever seen and not be responsible for something.

Bodyguard’s singling out of David as a loose cannon is far more convincing than its attempts to apportion blame to Tahir Mahmood and Rob Macdonald. The pair are far too likely criminals and it’s a shame that Mercurio’s own genius has us doubting everything presented on-screen. There’s no way he’d make it this obvious so none of the plot strands feel massively convincing. We’re still waiting for the rug to be pulled out from under us and it’s difficult to get too invested in likely red herrings.

You know a series like Bodyguard has really shaped your understanding of what’s normal when the sweetest relationship is between a woman that was seconds from blowing up hundreds of people and the man who stopped her. It was nice to see Nadia again, if only because Anjli Mohindra delivers fine work, and her return only throws up wider implications of her role in all of this. Nadia might seem too terrified to be responsible for anything else – she plays the part of the browbeaten wife well – but at this point it wouldn’t be a stretch to have her be responsible for the whole thing.

Bodyguard continues to impress as we willingly let ourselves spend an hour a week inside Jed Mercurio’s nightmarish pressure cooker. Taking a step back from the action pays off well and, fortunately, it’s not at the expense of the show’s momentum. Keeley Hawes may be gone (though we’ll have to wait and see…) but Madden is a more than adequate lead to see us through to the end. But what further horrors await us remains to be seen…