Last summer, Deadline reported that Kelsey Grammer had been discussing the possibility of returning to Frasier. Following in the footsteps of such successful comedy revivals as Gilmore Girls, Will & Grace and Arrested Development, it certainly seemed like a plausible idea. Things went a bit quiet after that, though, but now Grammer has offered an update.

Frasier, which was a spinoff of the legendary sitcom Cheers, originally ran from 1993 to 2004. Grammer’s psychiatrist/radio host character Frasier Crane relocated from Boston to Seattle when he transitioned from Cheers to Frasier, with the spinoff going on to run for a grand total of 264 episodes across 11 seasons.

Speaking to The Independent, Grammer has now said this about the project:

“We have been talking with several teams of writers, a couple of guys from the old show, a couple of new writers, and the take I’m looking for is just that he has a third act rather than trying to pick up where the second act left off.

We have to button up a few things, tie up a few loose ends, having to do with the fact John (Mahoney) is gone, who played my father Martin, but there are a couple of really interesting areas and it’s a little premature to discuss them yet, but when somebody signs a cheque we might be talking a little more specifically.”

Speaking to the Press Association, Grammer has now released this little statement about the Frasier revival rumours:

“They are rumours right now. I have discussed the idea with some people and I’m not sure I want to do it. That’s really where we’re at.”

And, in a video interview with People, Grammer hinted that a proper announcement could be made in the next couple of months. We’ll be sure to share that if/when it happens. 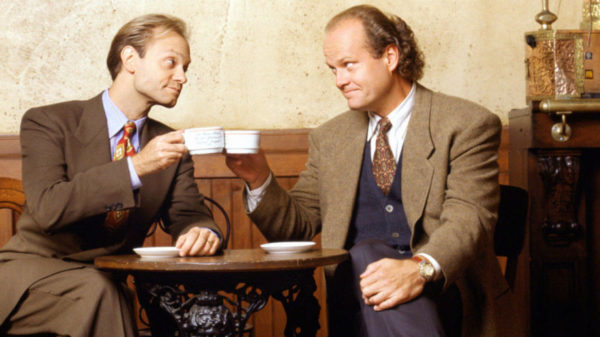 Last year, Grammer spoke to Vulture, who asked if it was true that a new series – if it did happen – would relocate Frasier to another new city. “I do not picture that, no,” Grammer said, before adding a little of how he does imagine a new series potentially shaping up:

“Certainly I think everyone that was on the show should be on this show, and then go from there. I know that some people have written things that are different than that, but they got a lot of it wrong.”

When asked about the possibility of Frasier’s son, Frederick (who was played by Trevor Einhorn in 8 episodes of Frasier) having a larger role in the revival, Grammer seemed to show an interest:

Grammer also said that he would like to stick with the sitcom format and avoid dropping in F-bombs, even if a Frasier revival ends up happening on a trendy online streaming service.

We’ll keep you updated as more news comes to light.