Dominic Monaghan is off to the moon!

Updated 16/05/21 – AMC have dropped a further teaser over the weekend.

With Moonhaven, AMC’s paradise-on-the-moon thriller, less than two months away the broadcaster have dropped a further teaser trailer.

It’s only further 30 seconds, but this time we get to meet lead character Bella Sway (Emma Macdonald) as she expresses her doubts about Moonhaven. We also get a proper glance at the wider colony, with idyllic scenes there set against the destruction on planet Earth. Oh, and a fair amount of locals doing martial arts and singing. Let’s expect plenty of this!

The US launch date for the show has now slipped to Thursday, July the 7th. However, we’re still waiting on confirmation of a UK start.

Dominic Monaghan is off to the moon!

Here at CultBox we love a good moon-based show, be it Star Cops or Space: 1999. Now, it looks like we’re getting another stab at lunar living thanks to Moonhaven.

The series, from Peter Ocko (Black Sails), debuts on AMC this summer and the broadcaster has released a first glimpse…

The teaser gives us a glimpse of life beginning on the lunar surface, before showing the colony from space. There’s also a quick introduction to a few of the show’s principal characters; Amara Karan (Stan Lee’s Lucky Man), Emma McDonald, Joe Manganiello and Dominic Monaghan (Lord of the Rings) all appear. Also in the cast are Kadeem Hardison, Ayelet Zurer and Yazzmin Newell.

The show is described as a suspense thriller with the moon dwellers holding the keys to saving the Earth.

Here’s the official synopsis for Moonhaven

Moonhaven centers on Bella Sway (McDonald), a lunar cargo pilot and smuggler 100 years in the future who finds herself accused of a crime and marooned on Moonhaven, a utopian community set on a 500 square mile Garden of Eden built on the Moon to find solutions to the problems that will soon end civilization on Mother Earth. A skeptic in Paradise, Bella is sucked into a conspiracy to gain control of the artificial intelligence responsible for Moonhaven’s miracles and teams with a local detective to stop the forces that want to destroy Earth’s last hope before they are destroyed themselves. 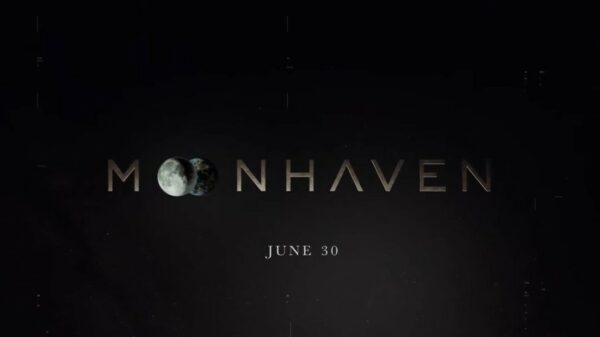 Talking about the show when it was greenlit back in May 2021, AMC’s president of original programming Dan McDermott said:

“What so intrigued us about ‘Moonhaven’ is that it is a suspense thriller set a century in the future that, at its heart, could not be more relevant today. Peter and his writing team have constructed some unforgettable characters and a story we know will captivate viewers and probe complex and deeply emotional issues that are top of mind today and have the potential to threaten existence on the only planet we have ever called home.”

“I’m incredibly excited to go to the Moon with AMC. They have always been a great partner in supporting shows that are truly different from the rest and I look forward to staying true to that brand.”

The show’s executive producers are Ocko and Deb Spera, with AMC having ordered six 1-hour episodes. Obviously, it’s early days for the show – but what we see, we like!

Moonhaven begins on AMC on the 30th of June. We don’t know where it might land in the UK, but we’ll keep you posted.