This first volume of new original audio adventures focusing on the character of rebel leader Avalon signals a new chapter in Big Finish’s association with the universe of Blake’s 7. The sad death of Paul Darrow (Avon), following the passing of both Gareth Thomas (Blake) and Jacqueline Pearce (Servalan), meant it was no longer credible to produce audios based on the surviving original ensemble cast. Instead Big Finish have opted to explore an expanded Blake’s 7 narrative, and to tell new full-cast and single-voice audio stories intertwined with the established television and audio canon.

The commitment to this new approach is impressively realised in Avalon: Volume One, a three story release that sets out this reshaped ambition to encouraging effect. Returning to the timeline of the first ever TV episode “The Way Back”, this trio of tales establishes a parallel story arc for this aspiring revolutionary whose determination to bring down the Federation is as implacable as Blake’s own.

What makes this focus on Avalon work well is the producers’ recognition of the need to craft her as a distinctive ‘rabble-rouser’ and not succumb to the obvious temptation to make her a ‘female Blake’. If anything, given the space to come into her own, Avalon is an even more driven, more self-assured and more impassioned insurgent than Blake ever was. She is also less prone to moments of self-doubt than Roj Blake, and reconciled to the uncomfortable realisation that liberation from Federation tyranny cannot be attained without human cost.

As its title suggests, the opening story “Terra Firma”, written by Steve Lyons, is the first of three tales set on planet Earth. Returning home to ferment further rebellion, Avalon needs the assistance of an expert smuggler. Who better to recruit than the freelancer Jenna Stannis? She might claim that she’s just hired help, unconcerned with the wider struggle against the Federation, but it becomes clear that Jenna has a greater concern with social injustice than she’s ready to admit to.

Aided by the boundless enthusiasm of the young and naive Fay, Avalon is frustrated by the arrest of Roj Blake and the loss of a crucial figurehead that could have been an inspiration to the rebels. What “Terra Firma” does to good effect is some planet building: filling out the picture of life and society on Federation Earth. It also delivers a trademark Blake’s 7 moment: a rebel strike against the oppressors, that’s reliant on surprise and subterfuge.

Second story “Throwback”, by Gary Russell, is built around a winning premise: an interrogation showdown between Commander Travis and his prisoner – in this case a Federation data analyst named Madison. It’s an intense clash of stubborn, arrogant personalities, in which the power balance between the two protagonists shifts as the investigation unfolds. It makes for a terrific listen, with Russell’s powerful dialogue and carefully timed revelations ensuring a compelling story. The flexibility of the new format is confirmed by the fact that this is a Travis-centred tale in which Avalon is very much in the background.

Trevor Baxendale is a seasoned Blake’s 7 scribe, and his closing story “Black Water” tracks Avalon’s efforts to strike a decisive blow to the Federation’s operations on Earth to great effect. Her plan is to deliver an attack that will ensure disruption and damage on a scale that the Federation will be unable to cover up. But the attack is also to be a metaphor, a symbol (and hopefully a catalyst) for the wider rebellion she’s eager to encourage. The argument about whether Blake’s and his crew are ‘terrorists’ or ‘freedom fighters’ has remained a recurring undercurrent of the series since the earliest Blake’s 7 TV episodes.

It’s a moral conundrum at the heart of each of these new audio adventures, and one that’s brought into the sharpest relief in “Black Water”. Avalon is committed to the hit the Federation hard, even though the resulting disruption to Earth’s hydroponic food production will put the lives of ‘innocent’ Terrans at risk. Added drama comes from the fact that, while the raid is being put into effect, the rebels come to suspect a Federation agent has been implanted in their ranks.

Olivia Poulet brings texture and believability to her performance as a ‘rebel without a pause’. There’s an animated and intense quality to her character’s sense of mission. But this is a rounded performance, which sees Poulet recognises the importance of not making Avalon a wholly likeable figure: this resistance leader is demanding, uncompromising and all-too-willing to exploit others. She’s even more problematic in that regard than Blake; something which all three writers, and director John Ainsworth, ensure is firmly established here.

Sally Knyvette gives every indication of enjoying returning to the role of Jenna. In the final days before her detention and banishment to Cygnus Alpha, Jenna appears here as a self-assured, freelance operator, willing to take risks if the rewards merit it. Stephen Grief is as compelling as ever as Commander Travis, bringing his signature gravitas and sense of menace to a role he clearly relishes. Amongst Avalon’s new allies, Becky Wright shines as the naïve and irrepressible young Fay, while Jon Edgley Bond is good value as the fiercely committed activist Weston. Cliff Chapman is also excellent as the conflicted new recruit Madison, a former record clerk who finds the privations of life in the rebellion hard to adjust to.

Avalon’s closing line echoes one of Blake’s pledges from “The Way Back”, suggesting that this rebel leader has not yet finished with events on planet Earth. It’s an effective way to sign off this first volume of adventures, highlighting the distinctions as well as the canonical connections between the lives of these two resistance leaders. Avalon has a long way to go before she needs two hands to count up the number of crew members on her team. But on the basis of this first volume, there’s good reason to have confidence that Avalon’s army is here to stay. 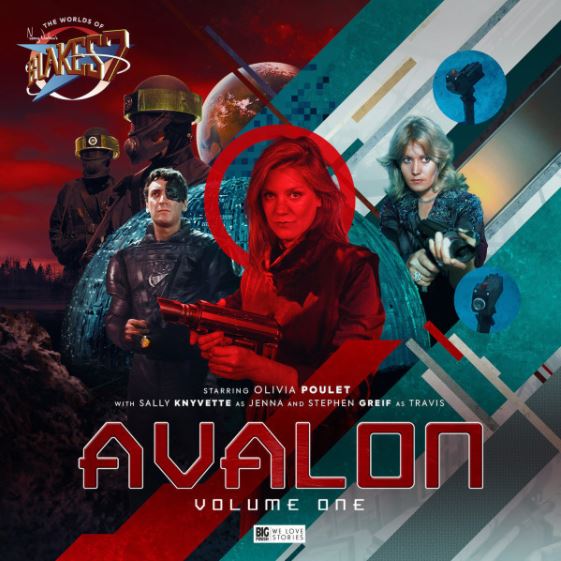 Avalon: Volume One is available now, in CD and digital download formats, from the Big Finish site