In the run up to their 200th monthly release, Big Finish have found a novel way to ring the changes; mixing up eras by pairing older companions with their regular roster of Doctors.

‘The Defectors’ begins as a Pertwee story, but promptly substitutes the Seventh Doctor in place of the Third. The Time Lord has no idea why and it takes a good while for Jo Grant (Katy Manning), despite her familiarity with regeneration and multiple Doctors, to trust the interloping incarnation.

Meanwhile Captain Mike Yates, who was standing in for the Brigadier, has been called away to London. In his absence, regular Army troops take command of UNIT HQ and insist on transporting the Doctor and Jo to a remote island location on “a matter of National Security”.

Their abductor, Captain Cornelius (Neil Roberts), is short on explanations and after arriving on Delphin Isle, it is clear something is amiss when they are billeted in a pub with eccentric staff, tinned food and seriously off beer. 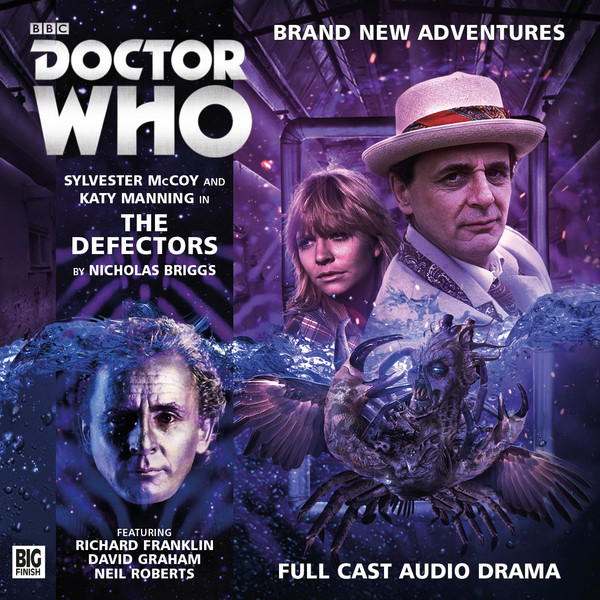 Riffing on Paul McGann’s opening line from ‘The Night of the Doctor’, Sylvester McCoy gets to walk an intriguing mile in a predecessor’s shoes. The less self-possessed Seventh Doctor grapples with a moral dilemma in a way the more confident Third never would have.

While Jo gets immersed in the mystery, Mike Yates is rather poorly served. In fact, he is side-lined to such an extent that we questioned the point of having Richard Franklin involved. It was a shame that we could not have followed Mike’s side of the story too.

Among the guest cast, the real treat is original Dalek vocalist David Graham, (currently reprising his Parker for Thunderbirds Are Go), who plays Hedgerton. There is also solid support from sometime Dalek operator and director Barnaby Edwards as Commander Wingford.

The mystery of Delphin Isle and its inhabitants, both alien and human, conceal a clever secret although the odd village feel owes as much to ‘The Android Invasion’ as it does to anything from Pertwee’s time. Other than Jo’s presence, there was little to make the story feel utterly rooted in that era. As the opening instalment of this Locum Doctors trilogy, ‘The Defectors’ is enjoyable, if perhaps not essential listening.

Extras: Fifteen minutes of interviews with cast and crew, plus a music suite.

Released in April 2015 by Big Finish.