‘Shroud of Sorrow’ uses the shocking events in Dealy Plaza and their emotional impact as the backdrop for a tale of alien invasion as, with a world in mourning, the alien Shroud spy a vulnerability they can turn to their advantage. People begin seeing the faces of deceased loved ones all around – in coffee stains, in raindrops on windows, in spilt blood at a hospital. It is a wonderful notion that plays on survivor’s guilt and grief with faces that become accusing heads, taunting and screaming.

After undertaking an outrageous rescue on an alien world, we find the Doctor and Clara arriving in Dallas, Texas. Posing as medical staff at Parkland Memorial Hospital, they are soon embroiled in adventure after encountering a face emerging from the burn on a journalist’s arm. 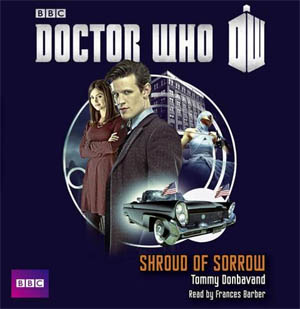 Author Tommy Donbavand maintains a good level of sparky dialogue between the pair and Clara, in her literary debut, comes across as bright and engaging, keeping up with the whirlwind Doctor.

As a threat, the Shroud is a cleverly horrific creation, complex and manifesting in a series of forms. Its process of consumption follows the Kübler-Ross model for the five stages of grief, providing our heroes a ticking clock as the victims proceed through denial, anger, bargaining and depression on their way to the fatal state of acceptance. They also employ an excellent catchphrase “The Shroud will feast!”

Donbavand is clearly a huge fan of the series and the book is drenched in references to past stories and companions. In a gallop though some of the Doctor’s sadder memories, when he uses himself as bait for the Shroud, we cleverly visit each incarnation to relive some memorable departures. Personally, we would question a few of the choices; surely sadder things happened to the Seventh than saying goodbye to Mel?

Donbavand is up on his TARDIS technology too, with mentions for the Helmic regulator and the Fast Return switch. He also manages to incorporate a touching tribute to the late Brigadier Lethbridge-Stewart, as well as an incredibly silly sequence where the Doctor assumes his identity.

Reader Frances Barber, Series 6’s Madame Kovarian, enthusiastically tackles the novel with a host of increasingly scary American accents. Given some of the groundwork she has to cover later in the novel, we are prepared to forgive some less than convincing Scots and Australian attempts too.

‘Shroud of Sorrow’ is an entertaining tale with a level of nostalgia that seems entirely appropriate in this anniversary year. Steering well clear of conspiracy theories, the story is fun and unashamedly silly in places, yet macabre and grotesque in others providing plenty of thrills and surprises to balance out some frankly bizarre moments.

Released on Thursday 4 July 2013 by AudioGO.

What did you think of the audiobook? Let us know below…