Heading into week two, Jodie Whittaker’s Thirteenth Doctor continues to delight. With spoilers, here’s our review of ‘The Ghost Monument’…

As a viewer there’s a sense of relief at the start of this week’s sophomore outing for the Thirteenth Doctor. With all the female incarnation ballyhoo behind us, introductions more or less made, and a cliffhanger to be resolved, it feels like Doctor Who has a lot more space to breathe going into ‘The Ghost Monument’.

Picking up from last week’s very Tom Baker-ish predicament, the Doctor, Yaz, Graham and Ryan are all scooped up by a couple of grubby humanoids racing each other for a hefty cash prize. Like the decidedly groovy new title sequences – which also harken back to vintage Who – it feels like ‘The Ghost Monument’ is an amalgamation of different eras. The plot feels proudly straightforward whilst still retaining the sense of scale and ambition that’s starting to define this expensive, progressive new period of the show.

At worst it feels a little half-baked, with a lot of interesting ideas – the reasons behind the race happening, the history of the Remnants, Stenza and Ilin etc – thrown in and yet never being fully explored. This mixed approach also, unfortunately, extends to the Doctor and her companions who we still know very little about. It’s the problem with introducing four brand new characters at once: Yaz remains an almost completely blank slate and there’s little development with Graham and Ryan.

However, it’s still very early days and what’s appreciable about ‘The Ghost Monument’ is that it is only just a standalone episode. The very classic Who approach of bridging two individual stories with a cliffhanger worked really strongly in this episode’s favour because it feels almost like a continuation of ‘The Woman Who Fell to Earth’. Despite two episodes behind us now, there’s still a long way before we have a TARDIS team that we know inside and out – and, frankly, it’s admirable. It’s been a while since Doctor Who favoured the slow burn approach to storytelling and it’s a change for the better.

With ‘The Ghost Monument’ it’s nice to savour the little moments we get to spend with the Doctor and her companions. There’s a growing confidence in the Doctor that breaks away from tradition – despite her ‘I’m the Doctor…’ speech on top of a crane last week, this Doctor still isn’t entirely sure of themselves. Whilst the Ninth, Tenth, Eleventh and Twelfth Doctors were emboldened with swagger and a bravura slyness by the end of their debut episodes, the Thirteenth Doctor feels more like a real person, someone really getting to terms with their identity after a big change. 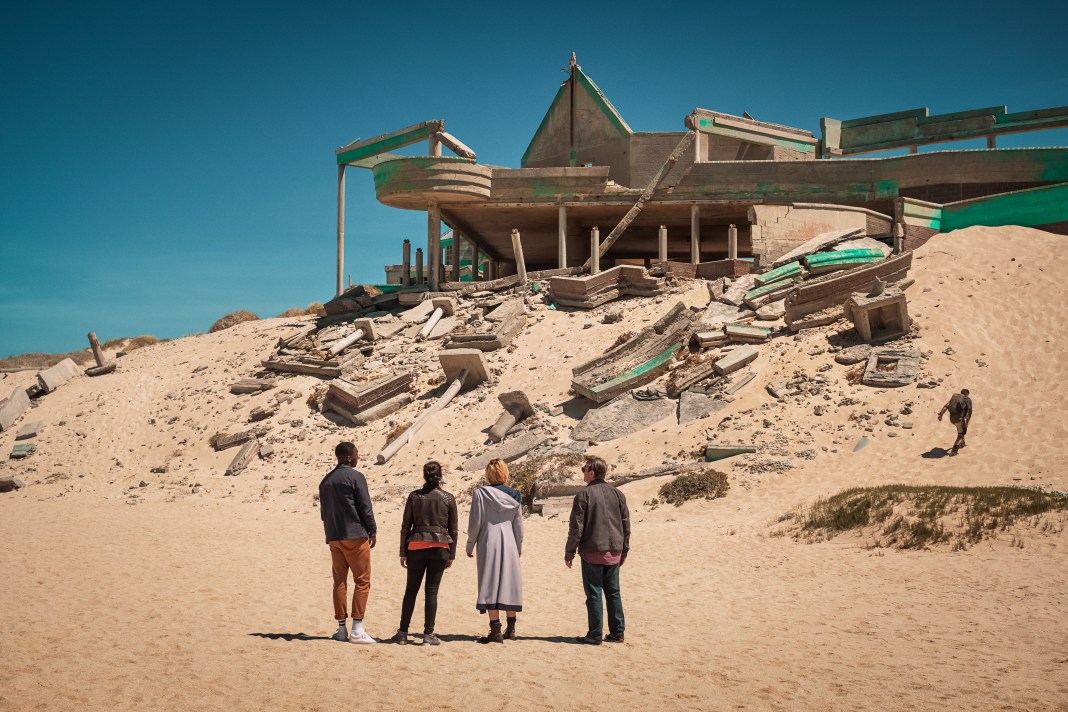 Jodie Whittaker continues to delight as a Doctor who has far more in common with one of her companions than her past incarnations. It makes for refreshing viewing, a much more level playing field and the biggest departure from Doctor Who’s more whimsical past. She’s still definitely the Doctor but she’s not an all-knowing miracle worker.

Of the three companions Bradley Walsh as Graham remains the most endearing – Graham’s ‘eh? That can’t be quite right?’ befuddlement gelling well with the Doctor’s peppy approach to problem solving. Yaz is still the least well-served, the non-revelation that she has a dad and a sister not really adding to what we know about her but Mandip Gill is contributing fine work.

Despite Tosin Cole not looking remotely close to the age he’s playing, Ryan is still a nineteen-year-old guy with a lack of emotional maturity. He has a lot of healing to do and working it through with his step-grandfather, Graham looks like the most promising storyline Who’s established thus far. His salt-and-pepper dynamic with the Doctor also looks like it could pave way for some fascinating drama – Ryan’s foolhardiness clashing with this Doctor’s almost preachy anti-violence sensibility.

Too much of this series of Doctor Who is working to call it a mixed bag but there’s areas in which it needs to improve. The good news is that there’s clear efforts being made to polish the show as it goes along and it’s wonderful to see. With this much talent in front and behind the camera, series 11 of Doctor Who is on target to become another terrific chapter in the show’s history – all it needs to do is iron out a few kinks.