Starting with the oldest of this batch of releases, we have two of eight pairings of Frankenstein’s monster and Count Dracula, A.K.A Boris Karloff and Bela Lugosi respectively, the Edgar Allen Poe double-bill of The Raven and The Black Cat.

Both of these Poe adaptations’ similarities with the original text pretty much end with the title; though shamelessly cashing in on the very tentative links to some classics of gothic literature, thankfully they largely succeed in their own right.

The Black Cat, filmed in 1934, marked the first time Karloff and Lugosi met on screen and is rightly hailed as something of a classic of early Hollywood horror. With Lugosi a traumatised PoW seeking vengeance on Karloff’s architect who betrayed him, it soon turns out that building design was a bit dry for his tastes and he has turned to the occult to get his kicks. With some memorably chilling images from director Edgar G Ulmer and risqué content for the time, The Black Cat remains a dark joy to behold.

Less memorable is the following year’s other Poe-fleecing title, The Raven, starring Karloff as a murderer who goes to Lugosi’s mad scientist for a new face and a new start. Well, guess what? Said scientist (did I mention his anger issues?) wants revenge and just so happens to love the work of Edgar Allen Poe, setting the scene for many a Poe-aping death device, a lá last year’s pretty awful John Cusack vehicle of the same name. Despite the plot sometimes being a little sluggish, both leads have fun with some gleefully OTT scenes of the macabre, making The Raven worth re-watching.

Whilst mentioning face-swapping leading to multiple homicide (doesn’t it always?), there’s also a third Karloff/Lugosi re-release this month, the ace 1940 sci-fi gangster Face/Off, if you will, Black Friday.

Selling itself on those two big names, the real star of the show is the largely undervalued Stanley Ridges as a meek professor turned mentalist killer. Not technically horror, let’s reluctantly move swiftly on to the 1950s, like we’re in a kind of budget Delorean.

Now, it really wouldn’t be a vintage horror round-up worth its salt without at least one release from the Hammer back-catalogue, would it? It’s good news, then, that the archetypal British horror stable has set the 1957 hit The Curse of Frankenstein loose once again on the world. It’s fitting, too, that this sees probably Britain’s two biggest horror stars, Peter Cushing and Christopher Lee, joining forces for an enjoyable if flawed gothic romp.

Taking a similar stance to the aforementioned Poe-themed movies, The Curse of Frankenstein plays fast and loose with Mary Shelley’s original text, with Cushing predictably cast as the driven scientist Victor, who creates a, well, creature, out of bits of dead bodies procured through grave-robbing. Things don’t go well for him, though, as his experiment starts to turn nasty, taking out the village folk and his friendship with his mentor in one fell swoop.

Cushing is, as always, on top form, plying his trademark posh earnestness opposite the wooden lumbering of old ‘Tall, Dark and Gruesome’ Lee, though the film does suffer from a sense of cheapness; too many scenes seem to only feature Cushing and Robert Urquhart (as his mentor, Dr Krempe) fighting evil, making the whole production feel less epic than it should be.

Still, this remains great fun and one of the best Hammer movies, plus this joint DVD/Blu-ray release features alternate versions and the famously cut ‘eye’ scene reinstated for the enthusiast.

A thought: the teenage Victor is played by a young Melvin Hayes, from TV’s It Ain’t Half Hot Mum. Carry On star Bernard Bresslaw was originally cast as The Creature. Could have been a very different film. 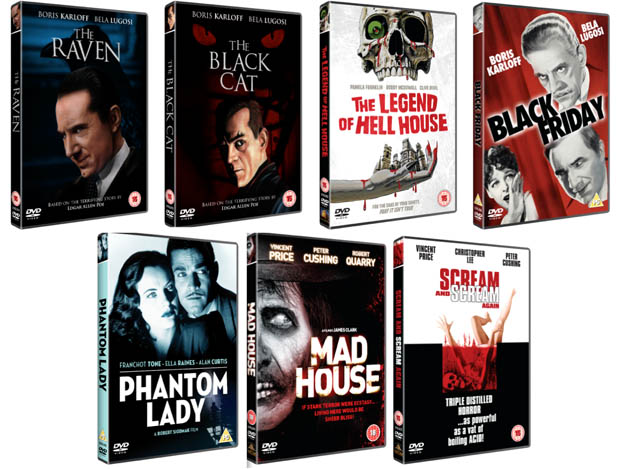 Peter Cushing and Christopher Lee both pop up again, alongside the great Vincent Price, in the somewhat bizarre sixties conspiracy thriller Scream and Scream Again, though it seems their presence was more in order to put bums on seats than actually play substantial roles. Opening with a hip jazz score on swinging London streets, the most striking thing about this film is how immediately annoying it is.

Vincent Price plays a dodgy doctor working in league with some Nazi-style secretive government types, creating bloodsucking baddies who off anyone who becomes inconvenient. Bookending the movie, Price is wasted, as are Cushing, whose role is an extended cameo as a morally-troubled army man, and Lee, who looks menacing enough for the few minutes his phoned-in role requires of him.

With a lengthy, incongruous and downright weird chase scene that breaks up any momentum alongside anonymous performances from the leads making the under-use of the bigger names even worse, Scream and Scream Again should have been dissolved in the acid pit writer Christopher Wicking lazily constantly turns to in his script.

A much better Vincent Price vehicle (once again co-starring good old Mr Cushing) is the 1974 U.S take on Italian giallo movies, Mad House. Price stars as a washed-up former horror star convinced to make a comeback TV show years after being sectioned when his fiancée was murdered. All starts well, though it seems cast members are now being bumped off by someone dressed as his famous character, Dr. Death, which is really not on.

This all sounds very meta, right? Well, with an ageing Price and many opportunities to comment on the creative process not taken up, the chance for something truly great is passed up on. What we get in its place, though, is some nicely chilling slasher horror. With charismatic performances from our star as the troubled actor losing his mind and fellow horror veteran Robert Quarry, director Jim Clark ekes every bit of tension from this intriguing plot.

With the host of names reeled off so far, it’s odd to finish with the character actor, Roddy McDowall. The Planet of the Apes star is not really known for his horror roles though, conversely, his unsettling appearance at the centre of the late Richard Matheson’s ghost story The Legend of Hell House helps make this the surprising highlight of this lineup.

McDowall stars as the leader of a group of paranormal investigators trying to conquer the “Mount Everest of Haunted Houses” following the mental and physical destruction of the original team trying to find the truth.

With a satisfyingly sinister atmosphere from start to finish and some cool Exorcist-alike effects alongside Delia Derbyshire and Brian Hodgson’s infectious electronic score, certain scenes will stay with you long after viewing.