Here’s our Doctor Who series 10, episode 8 The Lie of the Land review. There are plenty of spoilers here, so if you want the non-spoilery version click here.

Authoritarian rulers in power. A constant stream of lies and empty slogans that obscure the truth and keep the populace in check. A hostile atmosphere where those who speak out are demonised and suppressed by the state. A world where decisions are made solely to prolong the power of those who hold it, but where those decisions are sold as the best thing for the people

That’s enough about the news, though.

This Monk trilogy has slowly turned Series 10 of Doctor Who outward from the frothy escapism of the opening episodes to something darker, more foreboding, and increasingly pertinent to the helter-skelter atmosphere of 2017. It’s fitting, then, that the story comes to a conclusion with Earth under a fascist dictatorship kept in check by a stream of ‘alternative facts’.

Stories like this aren’t new – they’ve been a staple of science-fiction ever since George Orwell captured the everlasting anxieties of a boot stamping on the human face forever in 1984, a book which ‘The Lie of the Land’ evidently owes a debt to.

Nonetheless, dystopia has accrued an unforeseen amount of power in these troubled times. The subjectivity of reality and oppression of humanity are two thematic threads that have immediately stuck out from the bunch this season.

‘The Lie of the Land’ always sounded like a really great idea. The premise is brilliantly captured in a pre-titles sequence that’s darkly amusing as we see the Monks crudely inserted into landmarks of art, history, and sequences of past episodes that didn’t take place on Earth (the Monks helped out with ‘Nightmare in Silver’, apparently). The smiling benevolence of it all, reflected in Peter Capaldi’s soothing Scottish tones, is the point. Usually, on this show, invasions are a terrifying disruption of the norm. Here, they are the norm.

For a time, ‘The Lie of the Land’ delivers entirely on that premise. It engages in some brief but chillingly effective world-building of the austere, insular Britain in which the Monks have instilled a total climate of fear, establishing a lot with very little time (‘Memory Police’ crashing into an ordinary suburban home is the perfect blend of the mundane and the terrifying).

A key part of that success rests in recognising what’s been a constant highlight of Series 10 in spite of the differences in tone, which is Pearl Mackie’s Bill. In the midst of an episode that could easily collapse into family-unfriendly grimness, Bill is the human centre. She ensures emotional investment in the heroes’ attempts to overthrow the Monks with the Doctor gone AWOL.

The sight of her constructing a imaginary version of her dead mother to hold on to in the face of the Monks’ lies, encapsulates what has worked so well about her. Bill is like us. She suffers from the same human feelings, feels the same joys, and doesn’t hide behind a host of writerly quips like past Moffat companions did. That her feel much more real. When she’s the clear protagonist, as she is here for a time, those benefits are impressively on display. 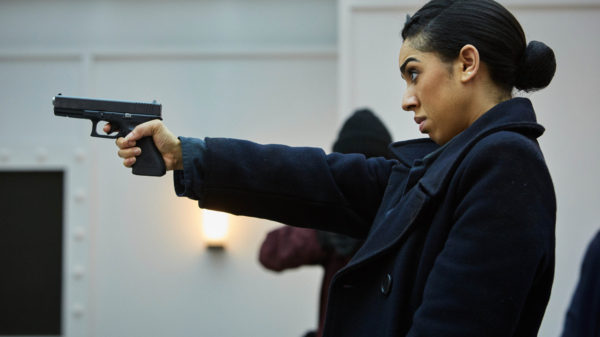 We catch up with the Doctor surprisingly quickly, with a confrontation that most expected to come in the final act. Initially, it seems an emphatic statement of the boldness of this episode. The conceit of the Doctor growing disillusioned with the cyclical behaviour of mankind and therefore striking up an uneasy alliance with a relatively peaceful race is a fascinating one. Indeed, it challenges the core of what we know about a character who, as Bill points out, has always been a champion of free will no matter what.

‘The Lie of the Land’, just for a moment, asks whether there’s a breaking point for the Doctor – and whether we can blame him.

From punchy to rushed

The problem comes just after that; when ‘The Lie of the Land’ gets skittish. The first 15 minutes, which are all world building and character drama are some of the most confident and immediately compelling of a season that’s built slowly to reap rewards later on. After the confrontation with the Doctor, a switch flips. The storytelling goes from concise and punchy, to rushed.

The ‘it was all an elaborate test!’ reveal has always been one of TV’s most annoying tropes. It’s even more frustrating here, given how much emotion ‘The Lie of the Land’ built up establishing the exact opposite.

That’s without even mentioning what I presume to be… a fake regeneration of some kind? A light show? What appeared to be a seminal moment when sold in the trailers ends up as a thirty-second indoor fireworks show. ‘The Lie of the Land’ recovers from this, but the manipulative storytelling of that confrontation leaves a bitter taste in the mouth, and undermines so much of the careful build up that had come beforehand.

There’s a sense that ‘The Lie of the Land’ has somewhat exhausted its bag of tricks after that onslaught of an opening act, because what follows is surprisingly conventional ‘part two of two’ Doctor Who… except in one case. That one case being the contents of the Vault: Missy, who appears as the sage and benevolent guide for the heroes (she tells the Doctor to kill his companion and talks about genocide for fun).

Missy’s appearance isn’t much more than a cameo, but it advances some really interesting ideas for the development of this incarnation. The Doctor’s keeping her around under the hopes of a moral restoration… and Missy appears to be vaguely, in her own way, on board. After her subdued appearance in ‘Extremis’, it’s a delight to see Michelle Gomez back doing what she does best – inconsistent Scottishness, that always seems to land on the word ‘good’, and a complete awareness of her own villainy. What’s really great, though, is the hint of genuine remorse to her performance that suggests a change in Missy’s character since her imprisonment.

It’s all a down payment for the drama that will inevitably unfurl later in the season, but it’s one that livens up an otherwise pedestrian second half no-end. 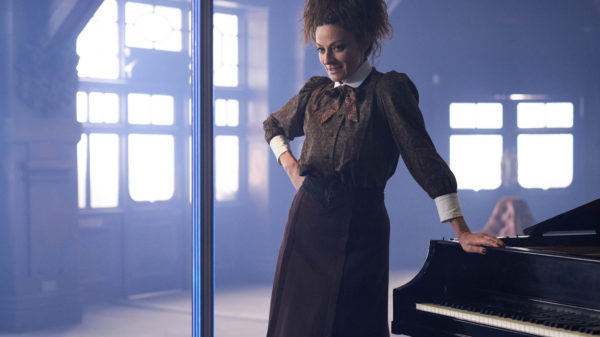 As a critic, things that are great or terrible are the easiest to write about. Strong opinions make for interesting and detailed reviews. When something is ‘just fine’, it’s a little harder. That’s the second half of ‘The Lie of the Land’ in a nutshell: it’s okay. More or less everything proceeds as one would expect, and it’s engaging enough, if never truly surprising.

The one risk that ‘The Lie of the Land’ takes is to have Bill save the day with memories of her mother. While it’s an ending that will undoubtedly bring about familiar complaints that it’s soppy and mawkish, I found it to be an emotionally satisfying ending.

True, it’s love that saves the day. The love in ‘The Lie of the Land’ isn’t the conventional romantic kind, however. It’s borne out of grief, and melancholy for someone Bill can never get to know, shown in how her mother becomes little more than a mute symbol of humanity for the world to rally around. We’ve seen many endings of this kind before, but the way this zeroed in on the specificities of Bill’s back-story made it more satisfying. 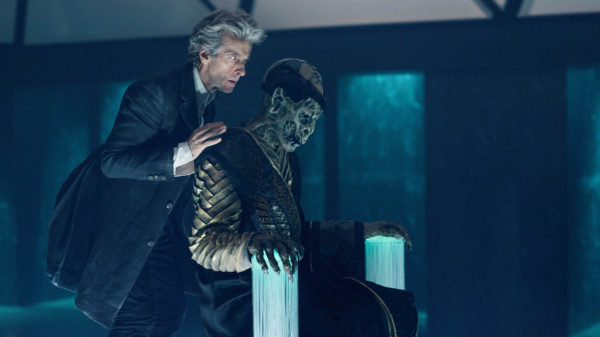 Other than that, however, it’s all a bit rote. The Monks scoot off, and Earth gets back to normal, and it’s all a little… easy. ‘The Lie of the Land’ does attempt to make the power of humanity’s collectivism its thesis statement. The Monks are exposed as an extremely small invading force that, without the lies and mythology, humanity can easily drive off.

It all feels a bit weightless, however. It’s an episode that shows how humanity can be duped into supporting and abetting monsters who occupy their lives. Shame that it all just boils down to a transmitter that needs to be turned off. That makes things cheap, and avoids the episode ever having to ask tough questions about humanity’s role in all of it. It also means it can’t offer anything other than platitudes regarding humanity’s ability to resist subjugation.

‘The Lie of the Land’ purports to be an uncanny capturing of the moment at the start, and it’s disappointing how it backs away from that into a world with much easier solutions, packing daring and fascinating ideas into a conventional structure.

‘The Lie of the Land’, as it is, is a decent episode, and a reasonable conclusion to this Monks trilogy. However, the somewhat uninspired execution means there are quite a few missed opportunities. Its interesting storytelling experiment never quite soared because it peaked in the prologue instead of at the end. It gave us the best new monster in ages, though. One whose power rests in poisonous influence and manipulation as opposed to strength.

With just four episodes left, Series 10 is proving to be a fascinating exercise in variation. We’ve gone from wide-eyed adventuring that recalls the RTD days to something grimmer and more perplexing. This week, we had a sci-fi riff on 1984. Next week, it’s Ice Warriors vs Victorian soldiers on Mars. Even when this show stumbles, there’s always a new corner of the universe waiting to be explored next week. Onwards, then…