This is our Doctor Who series 10, episode 11 World Enough and Time review. There are plenty of spoilers here, so if you want the non-spoilery version click here.

An episode should start as it means to go on.

‘World Enough and Time’ starts with the regeneration of the Twelfth Doctor. It’s a pretty accurate summary of the episode, really.

It’s a pretty startling 40 seconds. It’s also incredibly dense, with little details that help clue us into this baffling situation. The long hair! His solitude! The ice cave setting! His scream of anguish!

Its main function is to hit us like a sledgehammer when we’re settling down for a nice hour of entertainment. Even though the pointless fake regeneration from ‘The Lie of the Land’ has meant that this is a somewhat familiar sight, there’s no doubt; what we see is the real thing, the moments before Doctor number 13 – whether it’s a he or a her – enters the fray. That’s a pretty big way to begin an episode.

The funny thing is that it’s not the point. By the end of ‘World Enough and Time’, it’s as if that regeneration was part of another episode from the past. This is an episode that can overshadow the biggest story change available to Doctor Who, and then overshadows it a few more times for kicks. To say the least, ‘World Enough and Time’ is eventful… 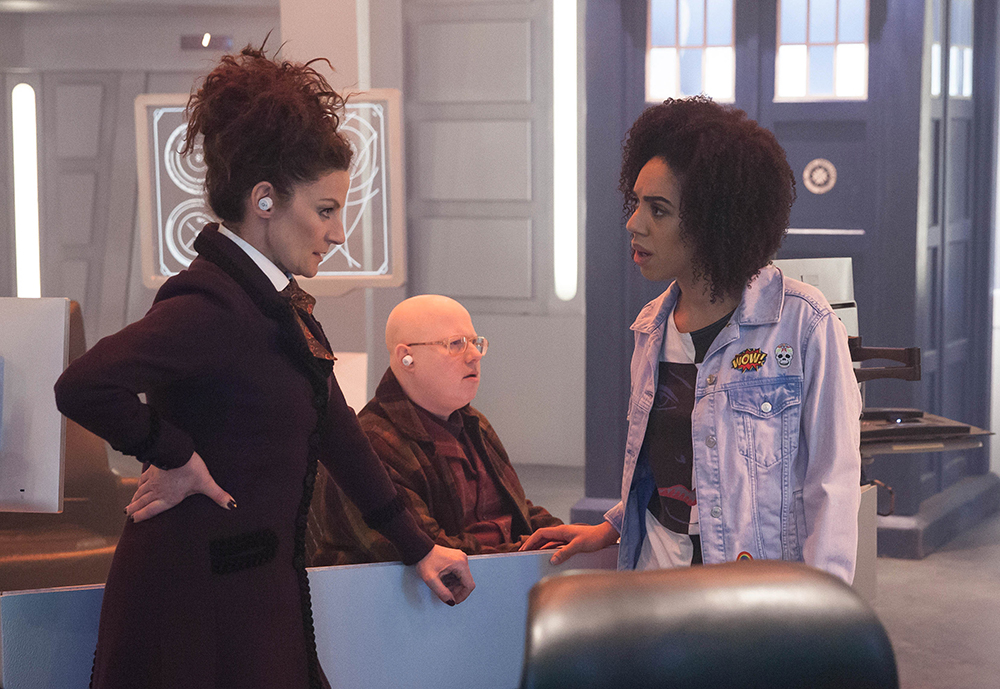 Or at least it is for poor Bill. It’s her sad, sad fate that begins and ends the long series of gut-punches that comprise this episode. For all of about eight minutes after the titles, ‘World Enough and Time’ is a bit of a lark. It allows Michelle Gomez to have a huge amount of fun as “Doctor Who”. Steven Moffat gets to show off his ability for writing pristine one-liners that only a 2000 year old alien from a hyper-advanced planet could realistically say.

And then, well… Bill. It feels weird to eulogise a character who isn’t dead, but if this was the end for the Bill that we know, then it hit very hard indeed. ‘World Enough and Time’ even rubs it in by instantly following up that sickening reveal shot of the hole in her stomach with a three-minute flashback reminder of why she was such a great character. It’s a sea change in tone for the episode, and a brutal reminder of the higher stakes and bleaker tone that we’ve pivoted into here. As something to make you sit up like a bolt after you’ve begun to settle down again, it hits like an electric shock.

There is just one thing, though. Perhaps it’s a petty gripe, and it’s obviously worth noting that this isn’t really her death scene, but it is, at the very least, one that ends her life of free will, but it’s difficult not to feel some unfortunate echoes of one of TV’s worst habits. LGBT characters get a bad rap in fiction, and especially TV, and the habit of killing them off brutally has become infamous from its overuse in recent years.

It’s ‘brutally’ that’s the operative word here, rather than the deaths themselves; it’s almost always a matter of execution. And the execution here was very questionable – Bill is taken out by an accidentally fired bullet by a character we don’t know and Bill doesn’t know. This doesn’t mean it’s a bad story decision, as the moment is well-acted, well-shot, and has a powerful dramatic impact. It’s just that it happens to perpetuate a slightly ugly trope that’s famous enough for any savvy writer to be aware of it. 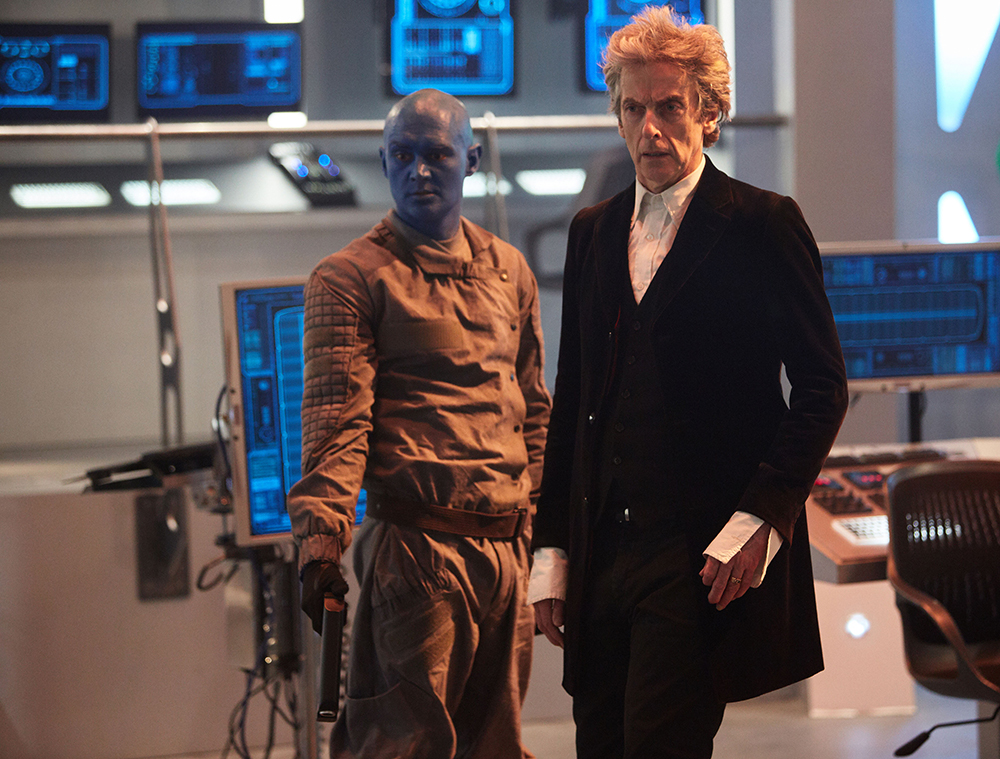 A slow cooker of an episode

Of course, though, Bill’s death is not the end. In fact, it’s startling that Bill turns out to be the lead character here, as we track her years of captivity in the mysterious hospital at the ship’s far end. It’s here where ‘World Enough and Time’ begins to unravel its engrossing central mystery.

These early scenes take on a vibe of chilling Gothic horror as Bill creeps round the dilapidated hallways, a glowing IV cord trailing by her side and discovers the proto-Cybermen hooked up to their machines like they’re in a farm. I’ve probably overused the word ‘dark’ in my reviews this year, because every prior use feels a bit quaint after ‘World Enough and Time’. You tend to rethink ‘dark’ in the face of a powerless, bandaged man silently screaming away for years, choosing to cry for his own death when he’s finally given a voice before he’s anaesthetised into slumber once more.

It’s a darkness that hits home, however, communicating the horrific realities of the trapped victims inside those Cyber-suits as the old foes are built from the ground-up, flipping the script to evoke empathy for the humanity that’s been stifled instead of the traditional portrayal of the Cybermen as a mindless, unintelligible horde. That, and the hospital is creepy. Maybe it’s a warning of what the NHS could become.

‘World Enough and Time’, for all of its big shocks is a slow cooker of an episode, far from the fan-pleasing blockbuster the trailers sold. For the entirety of the second act, it’s a quiet and subtle depiction of total powerlessness. Almost everyone here is sapped of their own agency. There’s Bill, stuck in her own nightmarish Waiting for Godot pastiche for six years, but even the Doctor’s usual ability to save the day with a wave of his hand is ruthlessly taken from him here, making him into a bystander scrambling at all costs to take back a modicum of control from the situation. It’s not just the central duo, either; it’s not like those poor Mondasians in the hospital awaiting their upgrade had any choice in the matter. 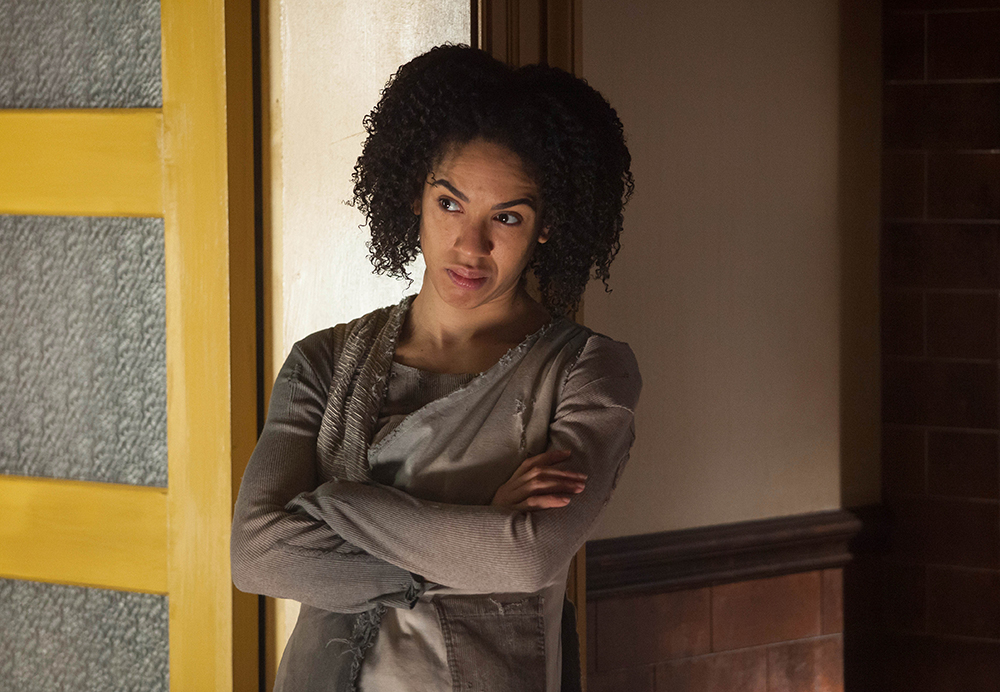 Imagine being completely, and utterly surprised

The source of that powerlessness is time. More specifically, time dilation resulting from a black hole that exerts a gravitational pull causing a fragmentation of the passage of events into different speeds (it’s a mouthful). It’s an unusually hard sci-fi idea for Doctor Who to take on, exemplified by the brief physics lesson with a whiteboard (the same device The Flash wheels out to explain the latest bit of comic-book nonsense it’s cooked up) to explain, but it’s used in a thematically powerful way as the Doctor and Bill’s experiences of time are directly juxtaposed.

From the Doctor’s perspective, he speeds into action to save Bill, but he has absolutely no impact on events; when he makes it down there and finds Bill, he’s too late, as time has outrun him. It’s a powerful idea to have an all-powerful hero whose abilities rest on a total knowledge of events brought to his knees by that imperceivable force, and Peter Capaldi communicates the shock and grief of the Doctor at his inability to save the day with a performance so powerful that it’ll remind you all over again that this is his third-to-last episode.

By the end, though, ‘World Enough and Time’ regains its proclivity for hitting the audience again and again emotionally. The final act is thrilling, but it’s a shame that it’s one marred by the knowledge that the promotion gave us. The trailers sold us Mondasian Cybermen and John Simm’s Master front and centre, but they’re both shock reveals in the last five minutes.

‘World Enough and Time’ tips its hand about the Cybermen early as it shows off the parts of the whole slowly being invented, but the moment where that dead-eyed cloth face stares out at the Doctor is still a fantastically exciting moment, one that turns to mounting dread as the inevitable fact of that Cyberman’s identity becomes clear.

As for the Master, well, he was there all along. Is it a little bit too camp and self-conscious to have the kindly Razor rip off his mask for the camera zoom in dramatically on John Simm’s grinning face? Maybe. Then again, this kind of stuff is what defines the Master, and the smug, restrained megalomania that Simm emanates in his handful of lines in that role is reminder enough of why the announcement of his comeback was so exciting.

It’s as close as Doctor Who is ever going to get again to the stomach-drop reveal at the end of ‘Utopia’. Yet imagine these reveals without knowing what was around the corner. Imagine being completely, and utterly surprised. It’s not the fault of the episode, but it can’t help but spoil the experience just a notch.

We’re left with a one-two-three cliffhanger, with the Cybermen, the two Masters and a horrified Doctor and Nardole gathered in a room. The Monks trilogy gave us a little taste of the ‘To Be Continued’ excitement, but that’s nothing compared to the unrestrained cruelty of a finale cliffhanger that flips the board over and leaves the chess pieces suspended in the air for a week. And this is an especially cruel one – poor Bill’s single tear is a deeply bleak reminder of her tragic predicament, one that seems almost impossible to escape (even Danny Pink didn’t make it out of a full conversion).

Then again, Moffat’s season finales are known for their surprise resurrections. Clara didn’t look likely to return in ‘Hell Bent’, and there she was. But even putting aside that, the situation is pretty grim. Missy’s journey to rediscover her goodness seems destined to be scuppered by the unavoidable cruelty of years ago coming back to bite her. All while the Doctor looking on, presumably feeling a little bit negative after a stressful day at work. 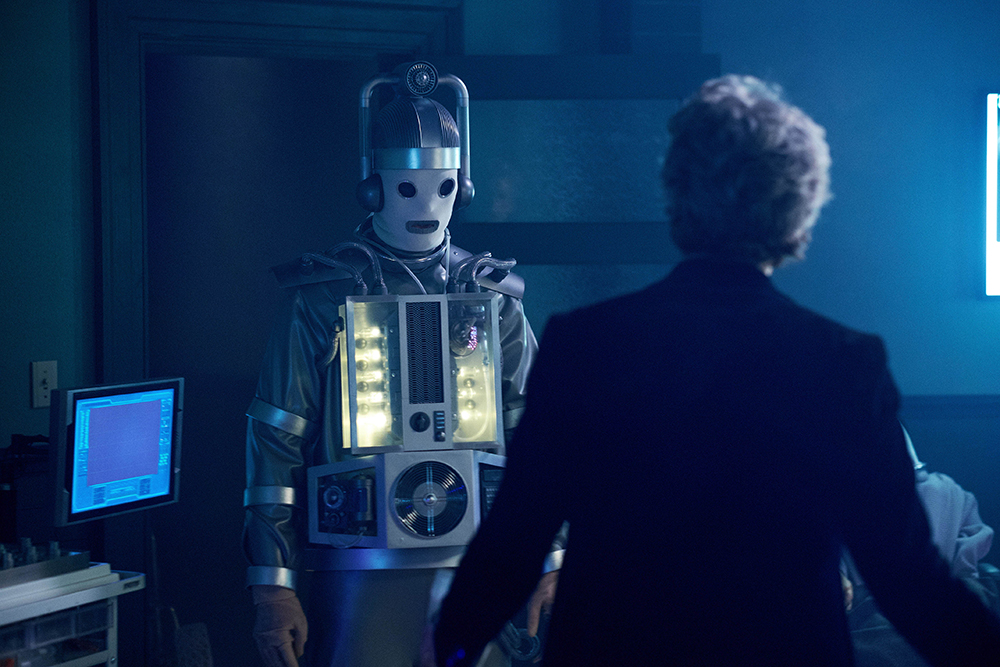 It could go either way

‘World Enough and Time’, undoubtedly, has problems. In that way a lot of Moffat’s work is, it’s a bit messy in its plotting. Why did the Master really need to disguise himself on a Mondasian ship? Even with the reminder of her past actions, isn’t Missy’s final turnaround a little fast? Doesn’t the Doctor get over what happens to Bill very fast, given that he’s on Floor 0 for all of ten minutes? I’m sure the internet will find many more things to pick at in the coming days, too.

This isn’t the intricate puzzle-box of ‘Heaven Sent’, where every little piece fitted somewhere. It’s more akin to the brooding, portentous ‘Dark Water’; an involving episode with some fantastic twists that creates a powerful mood, but still a set-up episode where not everything clicks. ‘World Enough and Time’ is a gripping episode, and there’s a case to be made that it’s the best of the season so far, and its flaws are borne out of ambition rather than pure laziness, but it’s perhaps not quite up there with the best of Moffat’s work on the show.

11 weeks have gone by far too fast, because we’re now staring into the barrel of a season finale. Precedent of recent years suggests caution; ‘Death in Heaven’ and ‘Hell Bent’ are good episodes with some powerful moments, but they’re also dispiritingly conventional and overly neat in the way they resolve the complications of their predecessors.

Then again, ‘World Enough and Time’ sets up a fascinating situation for ‘The Doctor Falls’ with the confluence of the two Masters, a Cyberman army, Bill as a Cyberman and that regeneration all to be dealt with. The trailer certainly shows they’re not skimping on the explosive action after the psychological drama of this one. Really, it could go either way, but it’s certain that this week is going to feel like there’s a black hole under us, pulling down, slowing time. It’s going to be a long, short wait.