The Cloister Bell will chime once more;
The Doctor’s off to Trenzalore…

Often, being a fan of Doctor Who, you have to park your fanboy gene somewhere the other side of Kasterborous. True, there’s no point loving the bones of a show if you’re not prepared to dissect it to death sometimes. But the critical scalpel-sharpening that’s been the response of some to Series 7B has been a reminder that Doctor Who isn’t, and shouldn’t be, the preserve of the online obsessive. It’s the children’s own programme which adults adore. It isn’t made for the groupie or the anorak or the geek…

Except, of course, for when it is.

‘The Name of the Doctor’ has fanboy DNA running through it, from the thrilling pre-credits sequence to that cliffhanger. ‘The ending is the moment of moments.’ So said Matt Smith in the BBC pre-publicity, and he wasn’t wrong. But in truth, the whole episode is a cavalcade of moments. It’s an adrenaline-pumping, valedictory carnival of Who.

These days, we’re all fanboys. We’re all keepers of the Doctor’s memory, because his DNA has written itself into us. That temporal scar tissue – it’s not scar tissue. It’s the gateway to adventure.

There’s Billy Hartnell, River poutin’,
Someone that looks not much like Troughton…
A major twist – the kids can act!
Some Glasgow gags for Mum and Dad;
‘Do I have the right?’ ‘Absolutely fantastic!’
Sylvester dangling off overlit plastic…

It’s certainly true to say that we never thought we’d see again that clip from ‘Dragonfire’ in Doctor Who; but it’s wonderful to think that, twenty-six years after the event, Steven Moffat may just have retconned why Sylvester was hanging off that cliff in the first place. 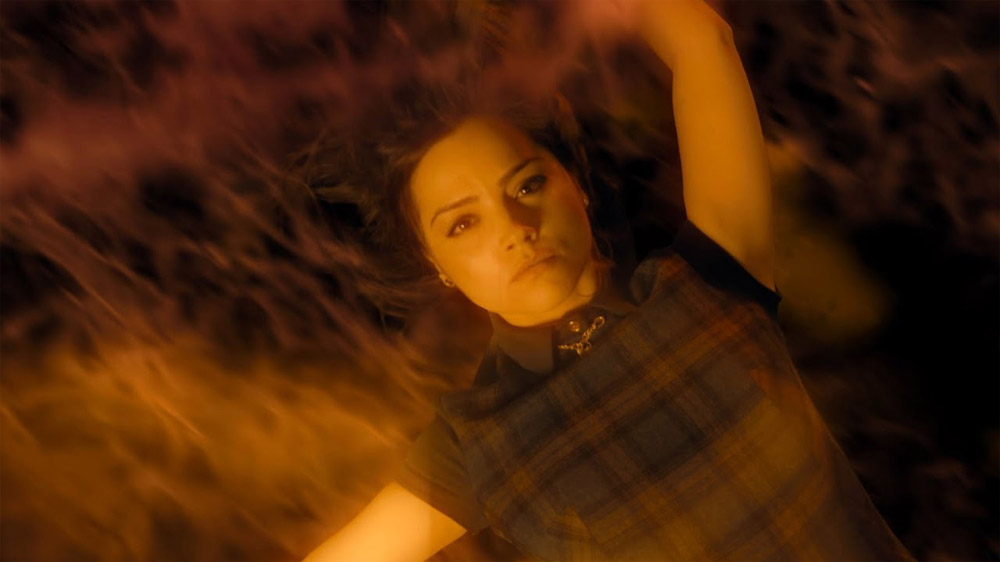 There’s no getting away from it – the pre-credits sequence is a thing of wonder, delivering a 50th anniversary homage via the back door, and effectively setting the tone for an episode which is about hellos and goodbyes, but not necessarily in that order. This being Steven Moffat’s Doctor Who, some of what we hear is not to be trusted. Clara’s opening account of how she was born to save the Doctor feels like something from a Russell T Davies’ script – the equivalent of Rose telling us of the day she died – but it plays a tricksier game with the viewer, while River’s final line – ‘Goodbye Sweetie!’ – may just be an eloquent and poetic exit from the series, or it may not.

Such questions and riddles are always inherent –
The bigger surprise is the story’s coherent!

There’s probably a pretentious, lit-crit reason for this – something to with the fact that, in the anniversary year, the themes of memory and the rewriting of memory, rather than short-circuiting the plot, have earned their conclusion. Certainly, it’s hard to think of any other Doctor Who story in which so much fan love has been onscreen, or is so much the point. If this story works – and it works brilliantly – it’s because it’s just so darn cool!

There’s that guy who seems like Jack the Ripper;
Clara, in retro, looking chipper…
The soufflé is the recipe, if we’re led to believe her,
[No, we’re not sure it made that much sense to us either]
Richard E Grant giving it plenty of sneers;
Strax, Sycorax and the tracks of my tears…

The visuals here are stunning – not just the memorialised TARDIS or the graves of Trenzalore, but the army of undertakers that is the Whispermen. When Richard E. Grant pulls back his skin to reveal a man without a face, it feels like something from Rene Magritte: the kind of brilliantly surreal image that should, by rights, lodge itself in the memory of a generation of watching children– or, Whisperman-like, extend its chill fingers into their hearts.

Sure, Richard E. Grant as a villain is a little too prone to dead-eyed threats – was John Simm unavailable? – and it’s a surprise, too, that the Paternoster Gang are happy to stand back and let him speechify, even after they’ve been instructed ‘Somebody stop him!’ But such derring-don’t won’t stop us loving that particular threesome. The scene when, during the conference call, Jenny realises the fact of her own death would be the highlight of any other episode. Let’s face it – in any other episode, seeing the Doctor leave Gallifrey – for the first time, as William Hartnell – would be the main event.

But the Moffster’s kept a secret from public scrutiny….
[Unless, of course, you saw it first on US DVD]

And so, in the event, the climactic revelation is not something that was altogether well hidden from the internet – or indeed from the interviewers of the Eastern Daily Press who first broke the story that John Hurt was to play ‘part of the Doctor’. The rumours of John Hurt: the Forgotten Doctor can be considered authenticated now.

For those of us who have loved this show since forever, the Name of the Doctor is something we’ve always known. His name is childhood, and adventure, and solace in the eye of the enemy. But the burnt reds and smoky devastation of the environment in which Hurt stands suggests a different truth, and adds to the terrible foreboding that the final scene carries with it.

Doctor Who? Just where will the show go from here, and what terrible compromises has the Doctor made to earn the name he cannot give to one of his own? Now, more than ever, we want that clever boy to run – to run and remember.

What did you think of ‘The Name of the Doctor’? Let us know below…