It begins on an enormous cliffhanger. It ends on about another three of them. And you know what? None of them feel cheap. Everything in ‘World Enough and Time’ – all the twists, the turns, the timey-wimeyness – feels earned after such a strong and investing series. This feels like a brilliant start to a brilliant end of a brilliant series.

It’s so full of stuff that a spoiler-free review for ‘World Enough and Time’ is something that will just graze the episode. I can tell you though that The Doctor’s sonic screwdriver can turn into a pen. Still can’t do wood though.

The Doctor seems determined that there is good in Missy, and that he can have his old friend back. There’s some beautiful, flashback-free reminiscing about their childhood on Gallifrey that Capaldi sells very well, and it vaguely makes you understand why he’s trusting someone who in the past has been so unremittingly evil. However, there’s always the sensation The Doctor’s hope is bringing an almighty pile of hubris down on him and others.

Off to put her to the test then, dropping her into a scenario where she can prove that she can be as Doctorly as her pal. The setting? A ginormous space ship, one where entire decks are cities or countryside, pulling away from the gravitational grip of a black hole that wouldn’t look out of place on the big screen. It makes the one from ‘The Impossible Planet’ look like a child’s drawing.

Missy treats the exercise with extreme tongue-in-cheek, often breaking the fourth wall while cracking off the one-liners. “These are my disposables; exposition and comic relief,” she says of Bill and Nardole, and all while prodding fandom by proclaiming that The Doctor’s name really is “Doctor Who”. Gomez has such fun with dialogue that was clearly fun to write. It’s so camp and sharp you’re willingly swept away with it. It’s a first five minutes that easily surpasses the six laugh test.

And then – oooh – it quickly stops being jokey fun, with a genuinely shocking moment that is unflinching in its horror. Even if you think you know what’s coming, you’ll gasp – and the show doesn’t even blink.

From then on things stay grim. The Doctor and Bill are separated; one to do all the sciency-wiency explaining that the drama of this episode sits on, the other to explore a creepy old hospital where the bone saw whines and patients sit, awaiting full Cyber-conversion.

Given that this is a Cyberman episode, the reveal of the very first Cyberman is a surprisingly long time coming and cannily done. Instead it focuses on the terrifying mid-conversion stage, and it ain’t pretty. 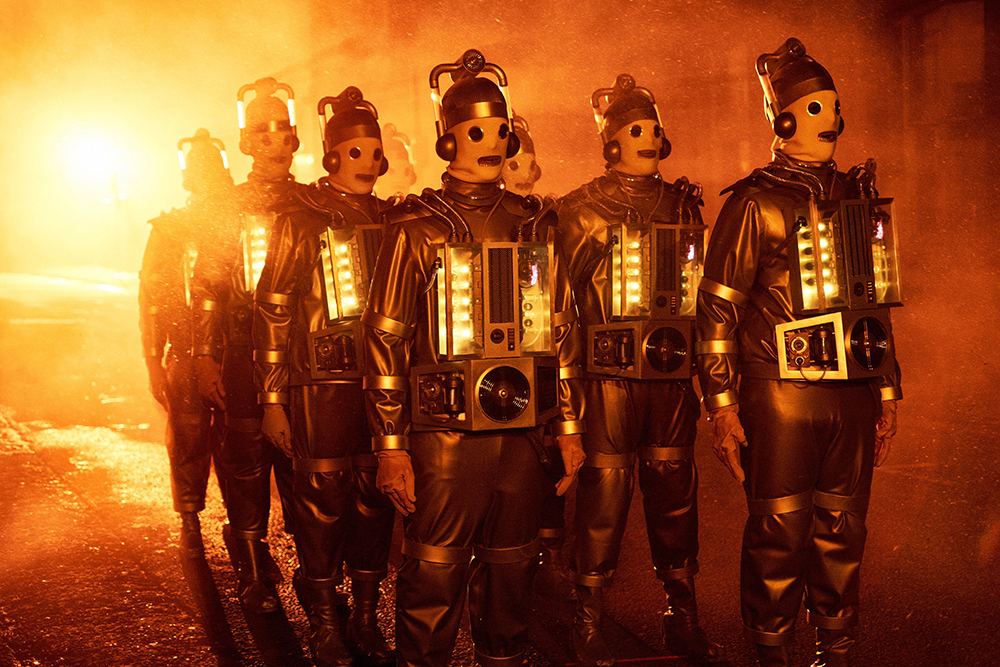 The rest of the episode is lessons on gravity’s influence on the plot and enough implied body horror to let your mind wander to some gruesome places. Oh and the word ‘pain’ gets said. A lot. An awful lot.

It’s creepy, it’s dark. If you’re like me and terrified of hospitals, it’ll have you counting the threads on the cushions.

There is a point, in among the science and scares, where something will dawn on you. It will come earlier for some than for others, but it will happen. And then you’ll have a moment that’ll make your face go all stretchy and big eyed as you gibber ‘Wait a minute…waitaminutewaitaminute… I think that…no…hang…on…yes!

Oh very well played, Moffat!’. It’s spectacular and crafty, and you will collapse back on the sofa, pleased with how smart and familiar with Doctor Who lore you are. Trust me, it’ll all make so much sense when you see.

And as for those cliffhangers? The episode could’ve ended on just one of them and it would be a great end. This is Moffat, though; like The Doctor, close to the end of an era, and careering toward it with everything he’s got.

‘World Enough and Time’ is set-up done right. A great episode that generates anticipation for even greater things. Mondasian Cybermen. Multiple Masters. And perhaps most shocking of all, The Doctor horrified and without a plan. Without hope, without witness, without reward. And as is made very clear, about to fall.