Less than five minutes into ‘Hard Castle’, and what turns out to be the address of the murderer is found on a scrap of paper on the body of a dead Professor.

It’s a rather convenient plot device, but having got it out of the way early on it allows Anthony Horowitz to present us with a Foyle’s War story that hits the ground running, quickly gathering momentum so that we never once stop to question it.

The ‘MacGuffin’ of the address leads Foyle from the luxurious Kensington house of American industrialist Clayton Del Mar to the prisons and offices of the Nuremberg War Trials, and from there to the abandoned Monowitz Concentration Camp as the story becomes more and more involved, and more and more grim.

I don’t know whether to put it down to historical ignorance on my part or superb research on the part of Horowitz & co but I must confess I’d never heard of Monowitz or I G Farben.

A sensitive subject, handled carefully here, it makes for some chilling moments – as Alan Deakin (Will Keen) escorts Foyle around Monowitz he points to a stack of canisters, innocuous paint-pot shapes stacked in wooden crates, and identifies them as containing Zyklon B, the gas used in the chambers.

This real-world scenario of a legitimate business involved in immoral activities is echoed in the fictional plot: Del Mar’s company produced and smuggled aviation fuel to the Luftwaffe in 1942, and it is this guilty secret that drives the plot. Nuremberg defendant Linz hopes to use it to blackmail his way to freedom; Professor Knowles, bribed into helping Linz, is murdered because of it. 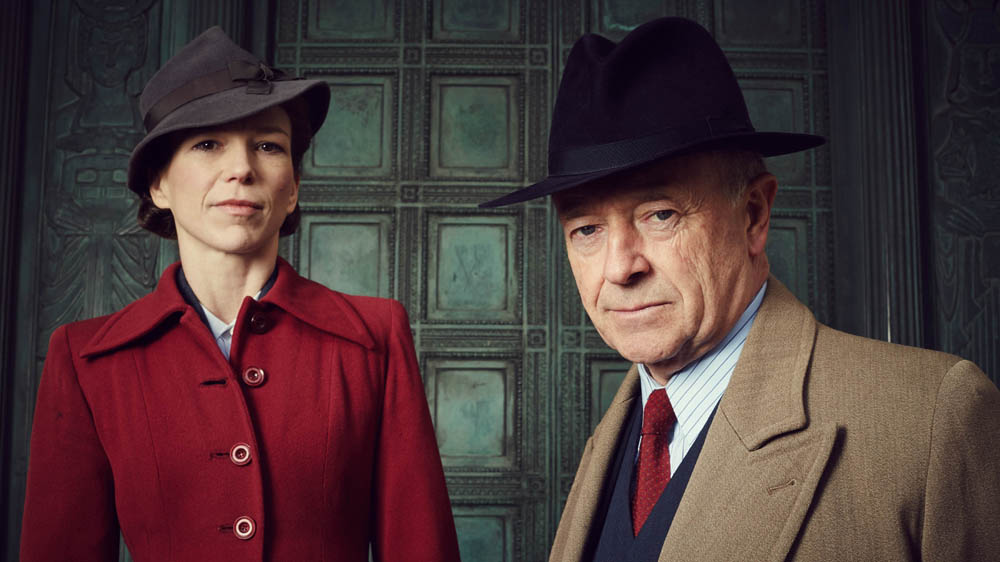 Now that Foyle is working within the more layered complexities of MI5 rather than for the police, there’s great scope for his honest single-mindedness to conflict with the more long-term views of his bosses.

Rupert Vansittart’s Sir Alec Meyerson is happy to give Del Mar a great deal of latitude, because the American is the only man to be granted an audience with the Iranian Shah. And with Del Mar working on Britain’s behalf, it’s an important meeting: “It is about British influence in the entire region” maintains Sir Alec, “We have to counter the Soviet presence in the Middle East”.

Alas, the Soviets are ahead of the game – and by the time Sir Alec accepts that Del Mar’s secret wartime supply to the Nazis has crossed a line and orders his arrest, Soviet agent Leskov has already murdered Del Mar outside his own front door.

For all that the story involves the unquestionable ‘black and white’ evil of the Nazi regime, it’s really a tale about ‘grey’ moral ambiguities. The debate of right and wrong, and how you decide, runs through it (even in the subplot of Sam’s MP husband, trying to help a female constituent who has been demoted at work to give a man his job back.)

As the story ends, we learn that Linz bought the Professor’s co-operation with diamonds taken from the inmates at Monowitz – but we also learn that the Professor wanted them to fund his wife’s life-saving medical treatment…

Even Foyle, it seems, has trouble identifying the right path through this moral maze. In the final scene he’s asked whether he allowed the wife to keep the diamonds. “What would you have done?” he replies. Superb.