It’s been a memorable first season for Legion.

We’ve had multiple dance sequences, a short silent film, a classroom lecture, a giant ice cube floating in the astral plane, multiple alternate realities and a man gruesomely folding in on himself.

Noah Hawley hasn’t held back from exploring David Haller through a deeply disorientating, often surrealist lens, and the result has been a relentlessly inventive and rewarding freshman season.

The only drawback to this is that Legion has set imposingly high standards for itself. An episode of TV that feels somewhat normal and grounded in traditional storytelling, therefore, is bound to feel like a letdown.

That’s the case with ‘Chapter 8’, a season finale that’s still quite strong with some sharp insights about its characters and a killer set-up for next season, but nonetheless feels a touch subdued, as if the show’s freewheeling creative force was spent by that thrillingly eventful penultimate episode.

One of Legion’s key strengths was to keep a strong handle on a sprawling variety of stories by winding each of its episodes around an overarching theme to which every character arc contributed. 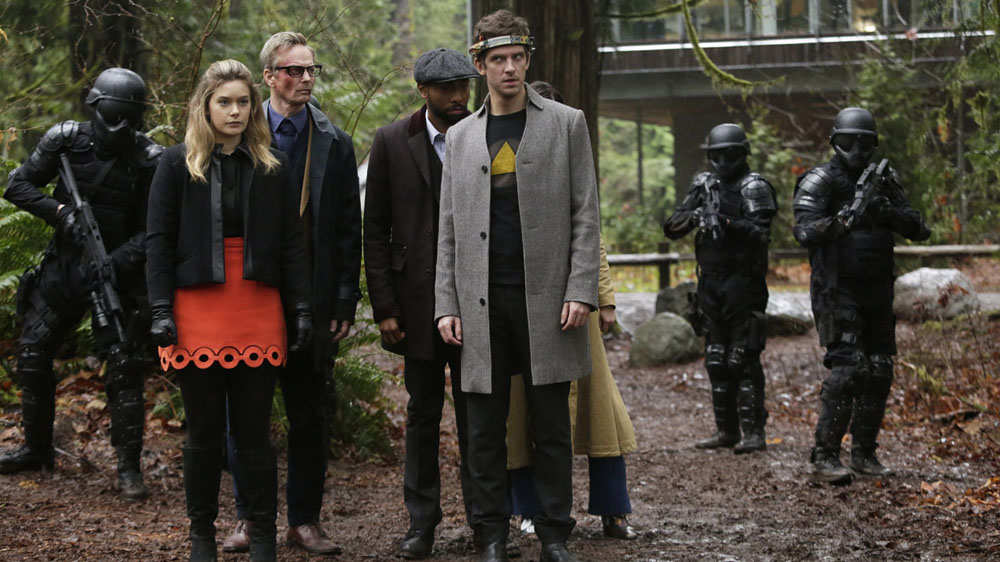 ‘Chapter 8’ is perhaps the first to lack that tightness of focus. The episode, broadly, tells two parallel stories – one of David’s attempts to expel the Shadow King, and of the continuing feud between mutantkind and humans – and it tells each one well, individually. Yet the two stories never seem to meet in the middle.

The thematic links between these two plotlines are tenuous, and the greater stakes of the Shadow King story means that it takes precedence quickly, both in terms of general interest and the episode’s actual focus.

There’s a lot to enjoy about the return of Legion’s exploration of the tensions between the ‘gods’ with unimaginable powers and the lowly mortals beneath them. The cold open is an excellent way of complicating this storyline right off the bat, re-introducing the Interrogator, a character who we had every reason to believe was simply evil back in ‘Chapter 1’, in a way that’s full of pathos and intimacy.

His loving family, his grievous wounds and his burning sense of unfinished business are all ways of grounding a show that’s usually playing on a stylised, malleable level of reality governed by ultra-powerful mutants.

Hamish Linklater delivers a really strong performance to complement this, mixing in the contemptible smarm of a villain with a sense of vulnerability and bubbling emotion that makes him uncomfortably human. 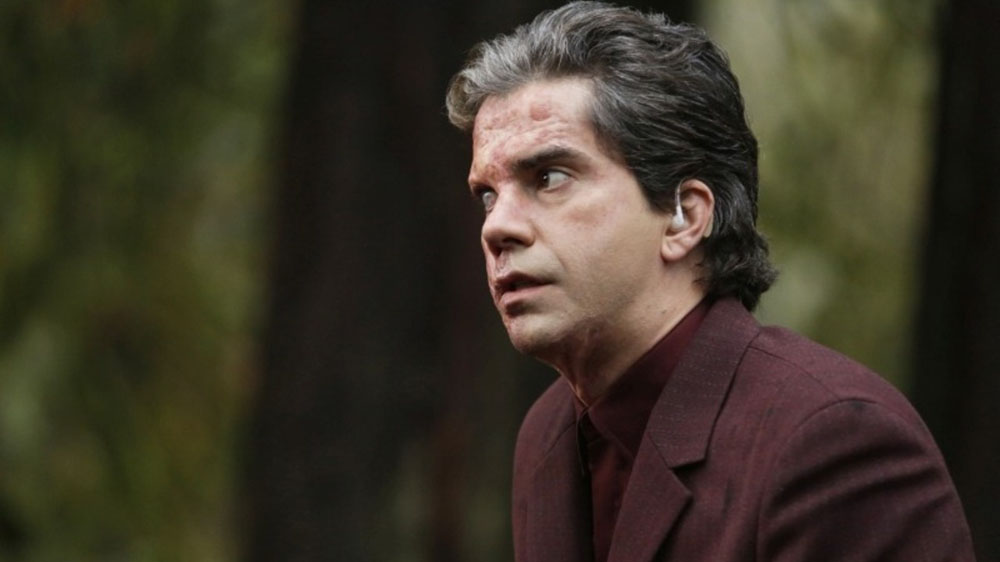 Exposing us to the consequences of David’s actions in a way that invites, perhaps even forces us to look at the other side of the argument depth is clever and surprising storytelling – a gear shift from superhero theatrics that opens up a fascinating new side of the show that’s rife with potential for season two.

‘Chapter 8’ finds specificity and depth within the anti-mutant force of Division 3 with the Interrogator, but it struggles to make the overarching group a relevant threat. The scenes of the military brass debating their next moves are tediously familiar for a show that revels in originality, consisting almost entirely of cryptic hints about secrets that Legion can’t reveal yet and references to a ‘second force’ that never actually arrives.

They’re simply vague and amorphous – men in suits with no concrete depth behind their ideology and no firm sense of the worldwide scope that the Interrogator boasts of. The X-Men mythology is built upon the notion that humanity can become violent and cruel in its fears of the ‘other’, so it was perhaps necessary for Legion to do its part for that tradition with Division 3.

However, the show has always felt much more comfortable with the dangerous weirdness of the Shadow King whose villainy lends itself to Legion’s idiosyncratic sensibilities, making this secondary threat something of an afterthought who lacks any real depth; certainly not enough to be compelling.

The decision of ‘Chapter 8’ to foreground their presence draws out that problem, and it’s something that Legion will have to reckon with in its second season.

It goes without saying that Legion’s first season has been David’s story to the core, with all other characters, Shadow King excepted, secondary to that. To the extent that ‘Chapter 8’ is about wrapping up that central story, it can be considered a success, because David’s arc is brought to a satisfying pause point here in a way that gives catharsis while opening up several doors for his future travails without his parasite. 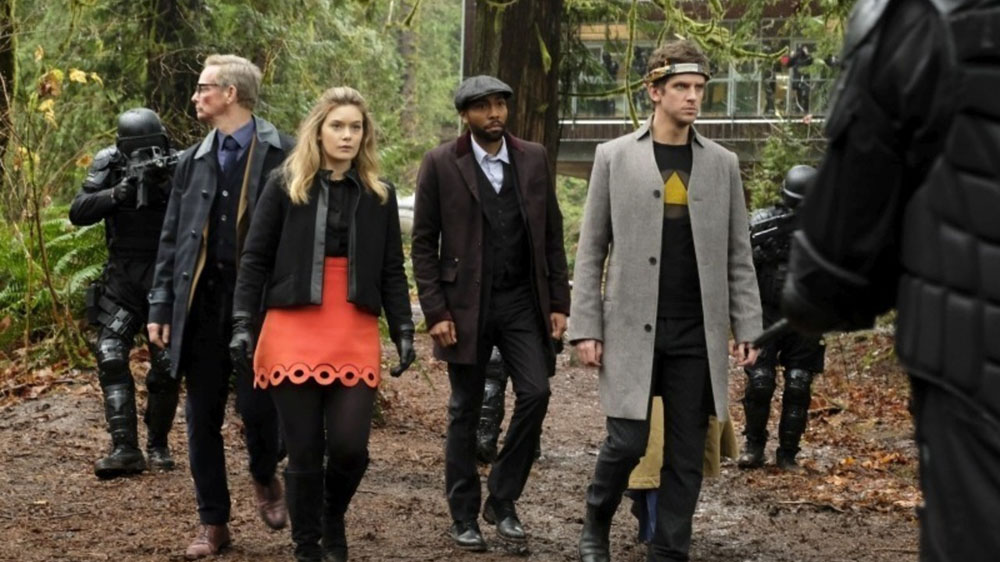 After last week finally brought David up to speed, the finale has a chance to take a breath and reflect on how far it’s come, and how much it’s changed. It’s here where the finale’s introspective feel works best.

Free of any urgent threat forcing David to action, ‘Chapter 8’ allows him to confront the nagging existential questions that have been woven throughout this season, such as the nature of his identity as someone pulled in two different directions by societies imposing their own narrative of David – be that a schizophrenic or a ‘world-breaker’ and beset constantly by a parasite dedicated to chipping away at his own mental stability.

It allows Dan Stevens to play a more sombre version of David, frayed with nerves about what he’ll find when he finally tries to right the wrongs that have defined his life, and the episode’s slower pace means it can play out in a way that’s thoughtful and composed. David says in that early conversation that his proposed peace accord will only work if it’s not about him. 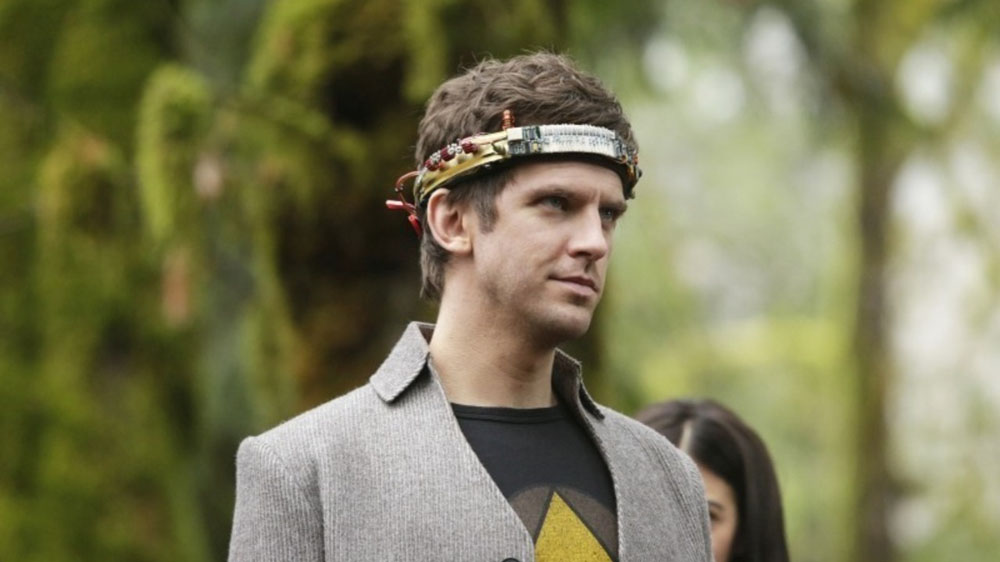 Having Syd, a representative of the outside world who’s pulled David up despite her own nagging psychological issues stemming from her power, be the essential saviour in this respect is a strong way to follow through on that.

It satisfyingly concludes Syd’s character arc of struggling to find a place in the world between David and Summerland, and quietly rejecting the idea of the ‘Chosen One’ narrative that ‘Chapter 8’ consistently evokes through Melanie’s imposing characterisation of his powers.

After a season where we’ve been stuck inside his head, we have a finale where he’s only one significant chess piece in a board full of them, and that feels right.

Where the episode struggles, however, is in sticking the landing. A character-focused journey into David’s psyche to confront the Shadow King turns into something far more formulaic – a generic punch-up as Kerry becomes possessed that ends up with two people running at each other in a long corridor until the Shadow King is expelled.

The typical invention and nuance of Legion is flattened out to something blandly functional that offers no real moment of cathartic conclusion, ending almost as soon as it possibly can and depriving the viewer of any moment to digest the mad dash towards the end they’ve just seen.

It’s a frustrating final showdown that feels rushed and messy in a way that’s not true to the insightful character development earlier in the episode, and it would leave a bitter taste if it weren’t for the dual cliffhangers that ‘Chapter 8’ concludes on. 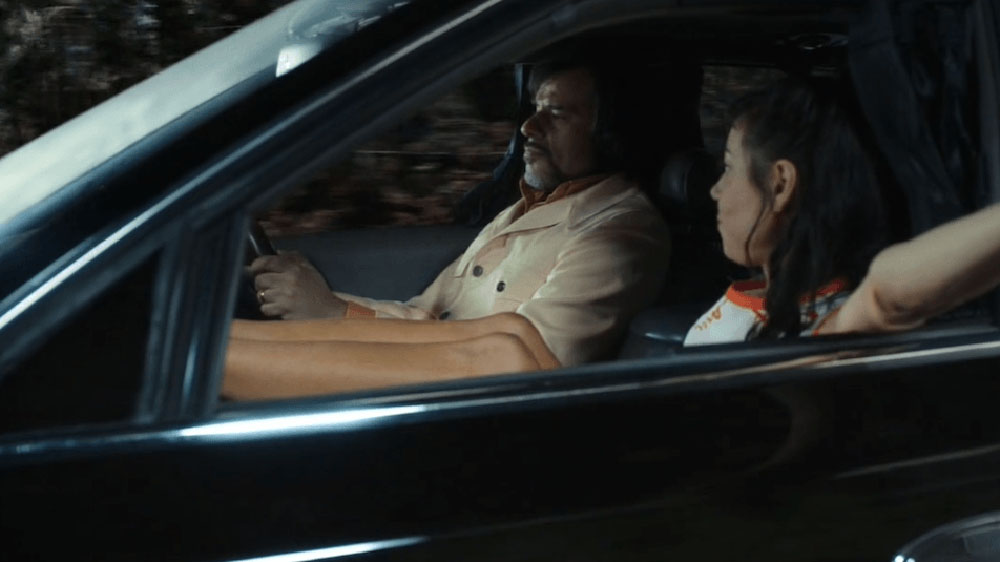 The Shadow King is out of David’s body and into Oliver, for one. Oliver’s journey is a quiet but well-pitched one this episode, ending on the subtly heartbreaking hint of his memory about his wife before he’s possessed and taken off to ‘someplace warm’ by Aubrey Plaza’s sinister villain.

It meaningfully develops the Shadow King as a threat by uncoupling her from David and making her villainy more literal as an embodiment of everything that went wrong in his life, and the scenes between Aubrey Plaza and Jemaine Clement, two of Legion’s most entertaining performers, are sure to be worth the price of admission alone.

As for the post-credits scene… well, that’s more of a head-scratcher. David’s kidnapping by that small, unassuming orb thing was almost comically abrupt, and we have no real hint as to what it all means.

It’s right for Legion, in a sense, to wrongfoot our sense of stability at the very last gasp just when we had a sense of what we going on. Just don’t ask where David is going, because I have zero clue.

‘Chapter 8’ is a good season finale that’s limited from greatness by a conventional structure with a focus on bland villains and a final showdown that’s disappointingly free of invention. Legion had, in reality, proven its worth before this, so even a mild let-down of a finale can leave this frequently remarkable show in a good place.

Until 2018, then. Hopefully, in the interim, we can figure out just where the hell David went.