The world of Legion is a world of uncertainty.

David Haller has always been a man (or a mutant) at odds with his own infinitely complex mind. Syd’s powers have left her uncertain about whether her body truly belongs to her. Melanie is unsure of whether to grieve her husband or hope for his imminent return. Each of the preceding episodes were filled with nagging ambiguities of this kind.

That’s what makes ‘Chapter 7’ such a striking deviation for Legion. It’s an episode of clarity and catharsis, where the walls of misunderstanding come crashing down to reveal the truth. Characters break down their own mental or physical barriers to finally achieve the goals that had been frustratingly insurmountable, and come to some form of peace by the end.

If you ignore the final two minutes, it would make a perfectly satisfying happy ending for the season.

By necessity, that clarity requires Legion to straighten out its woozy, unsettling brand of storytelling and finally spell out what’s going on in legible terms.

In short, ‘Chapter 7’ needed exposition dumps by the dozen, and it’s initially easy to see this as a recipe for capitulation into staid, conventional superhero storytelling. After all, exposition dumps are the necessary evil of any film or show, especially one dealing with convoluted genre ideas – a plaster that has to be ripped off before it can get to the enjoyable stuff.

Yet ‘Chapter 7’ succeeds, and it does so by choosing to perceive exposition differently – not as a necessary evil, but instead as a storytelling device that provides opportunity for visual experimentation and rewarding character development.

In that vein, we get Oliver and Cary finally revealing the identity of David’s parasite as Marvel villain Farouk aka the Shadow King in a way that humorously communicates the fragmented nature of their characters as they become bogged down in non-sequiturs and finish each other’s sentences.

Syd’s own chat with Cary, meanwhile is a funny and satisfying affirmation of Syd’s growing confidence as she completes his own exposition dump for him before determinedly striding off back into the hellish hospital vision.

The centrepiece of ‘Chapter 7’, as perhaps with every Legion episode, comes with David’s own clarity as he finally puts together the jigsaw puzzle of his own existence. The chalkboard sequence is a brilliantly imaginative way to communicate this growing understanding, proving Legion’s knack for visualising the human mind in a way that’s both original and plain fun in its freeform experimentation.

It’s also a great showcase for Dan Stevens as he plays double duty, both as the befuddled David and as his ‘rational mind’, played in Stevens’ natural accent in a performance that’s impressively distinct.

While the intent of the scene is prosaic, catching David up on information the audience knows or cold infer, the execution is a fantastic embodiment of Legion’s idiosyncratic take on the comic book genre that always remembers to find the pure enjoyment that can be had within its innovations. 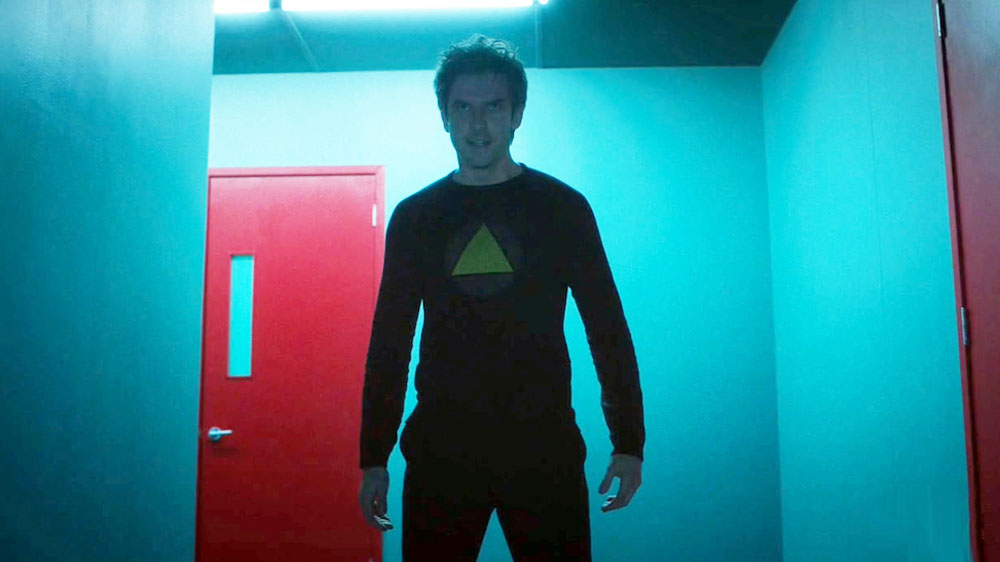 ‘Chapter 7’ is a tighter episode than normal, running several minutes shorter than previous episodes, but it still finds room here and there for Legion’s patented bouts of terrific weirdness that suddenly sends the show lunging into another genre entirely.

The silent film sequence as the Shadow King menaces Syd and Kerry was perhaps the episode’s experimental highpoint. It’s another chance for Aubrey Plaza to shine as Legion’s not-so-secret weapon, wordlessly capturing the unsettling bizarreness of the situation with a performance that’s gleeful and exuberant in all the most sinister ways imaginable.

It could be argued that the set-piece’s idiosyncratic touches aren’t wholly necessary as their thematic purpose is a lot harder to pin down. The way in which that the silent film format carries on outside the vision is a decision that undermines the effectiveness of the ‘old Hollywood’ feel of the Clockworks scenes, admittedly.

But like that key scene with David, the silent film sequence works not because it’s rich with subtext, but because it’s an example of technically superb and expertly entertaining superhero storytelling. 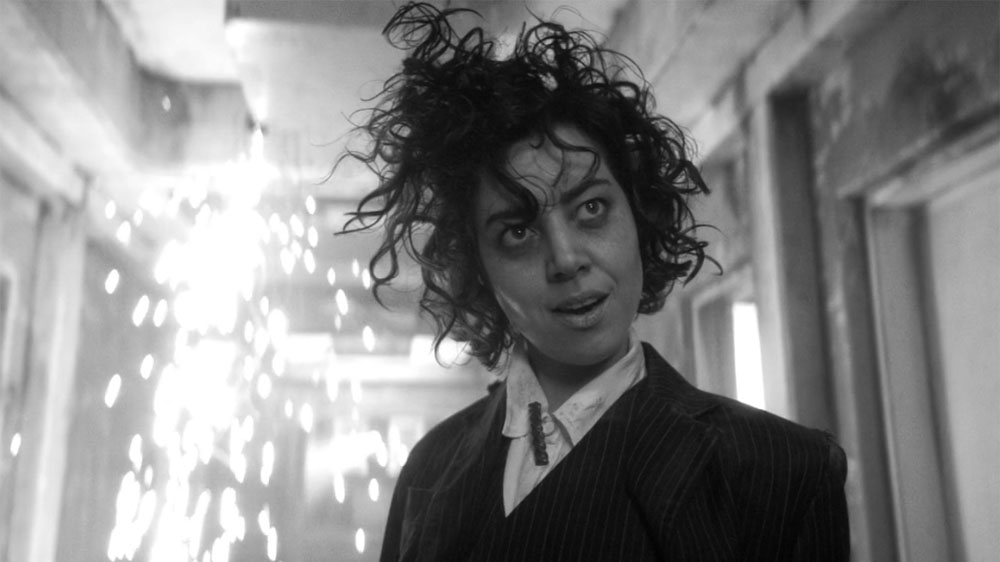 Legion can be a thoughtful exploration of the frightening uncertainties of the fragmented mind, or it can be a joyful/terrifying rollercoaster ride through alternate realities that throws out a thrilling new surprise at every corkscrew. ‘Chapter 7’ chooses to be the latter for the most part, and that’s a valid choice.

Catharsis isn’t the first emotion that most people would associate with watching Legion, but in many ways, it’s the dominant emotion of ‘Chapter 7’. As David eviscerates his own mental coffin and strides through the layers of memory in which the Shadow King has trapped him, it’s the first time that Legion has made his powers impressive and satisfying as opposed to frightening.

In a quietly moving subplot, Melanie finally gets her husband back after 20 years of uncertainty, whose zest for life has been entirely undiminished by the stay in the astral plane. Even David’s sister realises her own faults and comes to a new understanding with her brother.

Despite all of that, there’s something wrong in the background of this episode. David finds himself confronted with one of the incarnations of the Shadow King, the World’s Angriest Boy, in a flash.

Oliver has returned, but he doesn’t recognise Melanie, seeming like a bizarre alien to her. Oh, and the entire group have been surrounded by Division soldiers with the Shadow King breaking out of David’s mental constraints. Legion’s world is a world of uncertainty, after all, and soon enough, any clarity will be replaced by something chaotic. 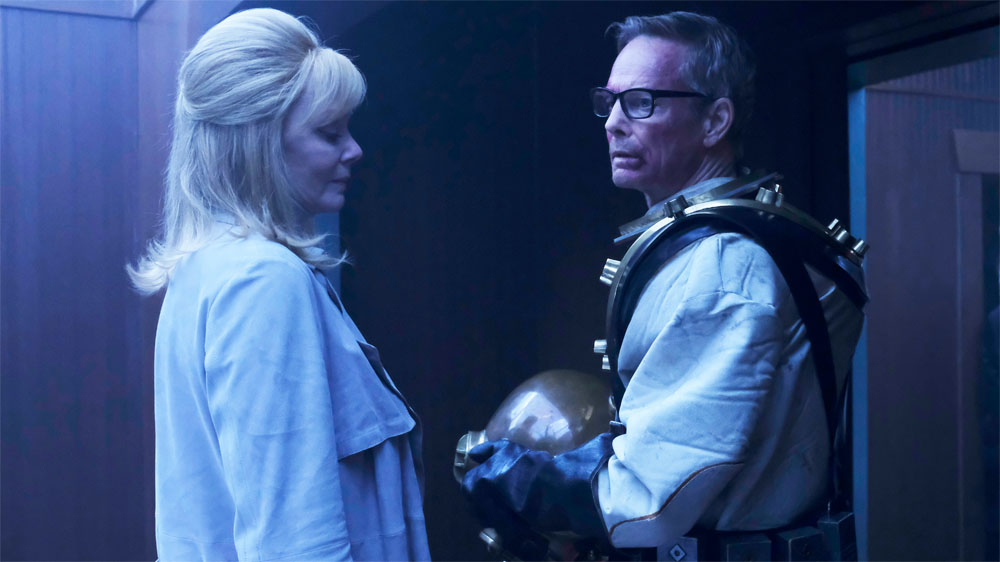 What happens next is anyone’s guess, but it’s clear that ‘Chapter 7’ wasn’t the permanent breakthrough that the characters have been looking for – it was the calm before the storm. And considering how explosive an episode it still is, that doesn’t bode well for next week’s finale.

Legion has achieved something truly impressive with its debut season, and ‘Chapter 7’ is another fine achievement that brings back the series’ freeform thrills after last week’s more pedestrian instalment’. It has every chance to bring it home with a conclusion that’s true to the chaotic journey that this show has taken.

One last trip on the rollercoaster…