Last week Rellik managed to tell a tangential but highly interesting little story of sex, family, sex with family, and blatant trophy misuse. This week we’re back on the main plot thread, on the trail of the real acid killer, and rewinding back through a pivotal moment in Gabriel Markham’s life. It’s arguably the second most important moment of the show, after find out who the reredrum in Rellik is: the acid attack that disfigured him.

Sounds exciting, right? And it should be, but this week you come away with the feeling that it’s been more rellif than rellik. Too much filler, not enough killer. Which is odd sensation to have, given that we witness an acid attack and another corpse. Perhaps it’s because Gabriel spends so much time laid up in hospital.

We begin/end with Gabriel (Richard Dormer) leaving hospital in his plastic recovery mask, and dealing with a piece of bad news that seems just as damaging to him as the acid attack. ‘What’s in the lab report?’ is the big mini-mystery this week. Whatever it is, it makes Gabriel suddenly hate his wife. And though it’s contents are certainly enough to turn his world upside-down, the way it’s presented is more subdued than you’d expect.

Seems like his daughter Hannah isn’t his daughter, which is one of those plot twists that makes me want to go back (forward?) and watch the previous episodes to see how he interacts with her. Certainly he still sees her as his daughter, given that he was traipsing all over the grimiest parts of London searching for her last week. 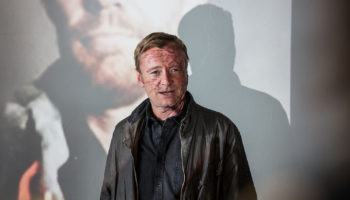 It’s one of two dysfunctional daddy/daughter relationships lurking beneath the mystery and murder in episode 4. Elaine goes to visit her not-dead-yet dad in prison for a final chance to spite the old bastard and prove to us why she sold his car and gave him a cremation he’d have hated. He killed her mum and doesn’t seem to give a shit. In terms of Polyfilla-ing in the gaps in the story, it works, but when it’s over it does feel like it was there to tell rather than show.

You could argue – if you really stretch things and have waaay more time to think about the episode than a human should be allowed – that there’s a third daughter who’s the victim of a a failed parental background, and that’s prostitute Kerri (Lucy Chappell), the girl who is brutally and swiftly murdered by the acid killer at the top of the hour. Like I said, waaay more time.

After another night of being the plaything of Det Supt Ed Benton (Ray Stevenson), unsuspecting Kerri accidentally finds herself at the centre of the acid killer attack on Gabriel and from then on becomes both a clue and a compromising witness for Benton. By the end of the episode, knowing what we do, her murder feels like a cop-out. It means Benton gets away scot free for having sex with her on police property, with only Gabriel knowing his secret, and as we’ve seen, they have a nodding agreement on the subject.

Past the prostitution and papa problems, we rewind back to before the acid attack, when Gabriel is a handsome, cocky cop with a winning smile and an alpha-male attitude. Watching him swagger through the police station it really hits home how damaging the acid attack has been to him; not just physically, but psychologically. He’s practically a different man. The contrast between Dormer’s performance pre-attack with his post-attack communicates far more than any prosthetics.

But cocky Gabriel is a man not so much courting hubris and having a rough quickie with it. After failing to catch the killer in a big nighttime operation, and then finding another victim close to the police station, Gabriel calls out the killer at a press conference, suddenly making things personal. And what’s more personal than getting acid thrown in your face?

We always knew Gabriel hunting down the acid-killer was deeply personal, but somehow knowing he baited the guy (or girl!) beforehand makes it even more personal, as if catching him (or her!) will make up for his hubristic error, as well as bring a murderer to justice.

And then, as if an hour of acid-splashing, infidelity, and corpses wasn’t enough, Rellik makes sure to leave you with an image that’ll stick in your head for a while after the credits have rolled: clean-freak psychotherapist Isaac taking out his latex gloves and ‘ahem’ polishing his privates over the case files of suspects and articles surrounding the acid attacks.

It’s the kind of final scene designed to make you go ‘Aha! He’s definitely the killer!’, but with two weeks remaining is it too obvious? I hope it is too obvious. Bringing a quality actor like Paterson Joseph into a drama just to be a red herring would be the kind of ballsy move I couldn’t forgive, no matter whether you look at it forward or backwards.