Sad times in the world of The Musketeers, as Louis dies like a minute into the episode.  I’ll miss his precious little sunshine face.

Treville tells Athos to take the new little king into hiding until all of the ensuing nonsense blows over, which is wise, except for the bit where Anne didn’t know and is justifiably miffed.

And then it turns out that Louis went ahead and named Treville regent instead of Anne after all.  Anne is justifiably miffed about this one too.  Nice one, pal.  Treville’s first act as regent is to disband the Red Guard.  Let’s be real: what was the Red Guard’s job, anyway?  Make things more difficult for the Musketeers?

Meanwhile, Constance and Sylvie take the little king to a nice dusty abandoned building to lay low, but apparently nobody’s taught the kid anything about the concept of money and commerce – an excellent educational foundation for a future leader, for sure – and he attempts to steal some plums.

Who can blame him, though?  Plums are proper lush.  Trouble is, the shopkeeper is cross that a little so-and-so has attempted to make off with her goods, and the girls and their young ward make a hasty exit.  You can tell it’s their first time hiding a monarch. 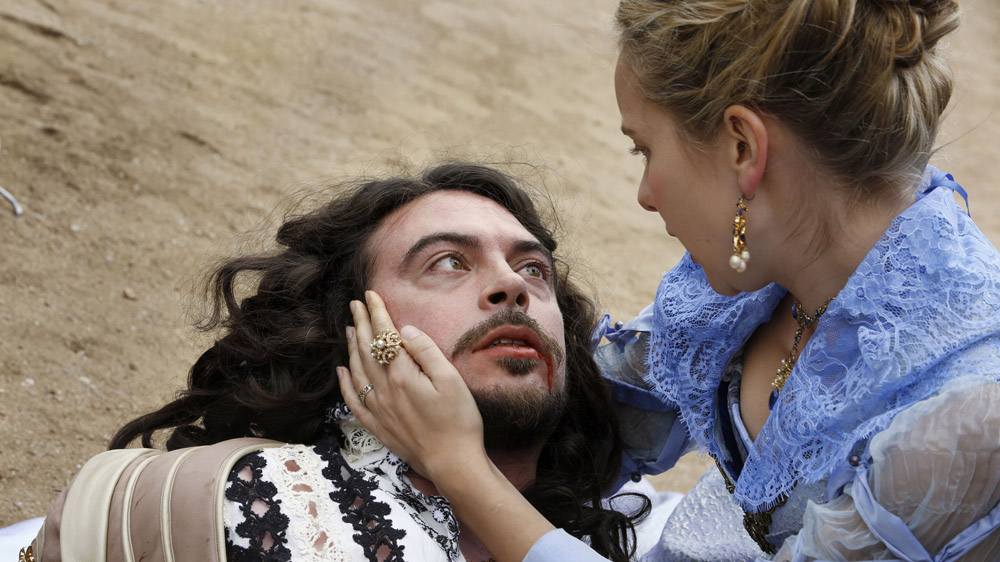 Gaston’s a very silly fellow.  What’s the point of trying to become an unpopular king?  Wouldn’t you just worry even more than usual about all the people who probably want to murder you?  Spilling blood all over the streets of Paris isn’t usually the way to get people to want you to run a country, bud.  Besides, it looks like the alliance between Gaston, Grimaud, Lorraine, and Lorraine’s excellent hair is beginning to unravel, like I hope Gaston’s cape would if I pulled real hard on those funny little tassels.

The little king nearly finds himself in a sticky situation when his mum demands to see him in spite of, you know, massive safety issues going on, but Aramis is there to save the day.  Poor kid has no idea what the nuts is going on.  He just wanted a few handfuls of plums, and now he’s being snatched out of a laundrette by Grimaud’s men.

But really, my favourite thing is still Anne, maintaining such strength while all the men around her make things as chaotic as they possibly can.  Just make her queen of everything.

Poor Treville, though.  He was just a good person, trying his best.