It’s okay everyone, it’s a bluff. A good bluff. And a relief, because it felt plausible for something that stupid to happen.

The opening gambit of ‘Musketeers Don’t Die Easily’ – that Athos has drunkenly shot D’Artagnan for sleeping with a woman who turned out to be his presumed-dead ex-wife (that old chestnut) – is revealed to be a ruse. If it hadn’t been, then it would’ve been a plot driven only by the characters’ stupidity.

That would, of course, be terrible.

After this reveal, we’re introduced to the guest villain. It’s Sean Pertwee having a tremendous time in a wig. He’s playing a very repulsive man, set up as a bigger threat than last week’s (repeatedly mentioned) glaring ratcatcher.

Athos’ funeral is also a surprisingly funny scene (He was short, wasn’t he Athos? Certainly if his coffin is anything to go by, and the fact that he can successfully hide under a quite big hat), and D’Artagnan shows his quality when holding his nerve confronting the Cardinal. It’s looking good as the plot thickens, the initial worry regarding idiocy moving the plot along is fading fast.

Meanwhile, what’s Constance doing? Well, she’s following a stranger a long way through the city to an abandoned-looking building, then going in when the stranger suspiciously waits outside and insists Constance enter.  You know. Like people do on telly when it’s obviously a trap. Clearly Constance hasn’t watched enough bad horror films. 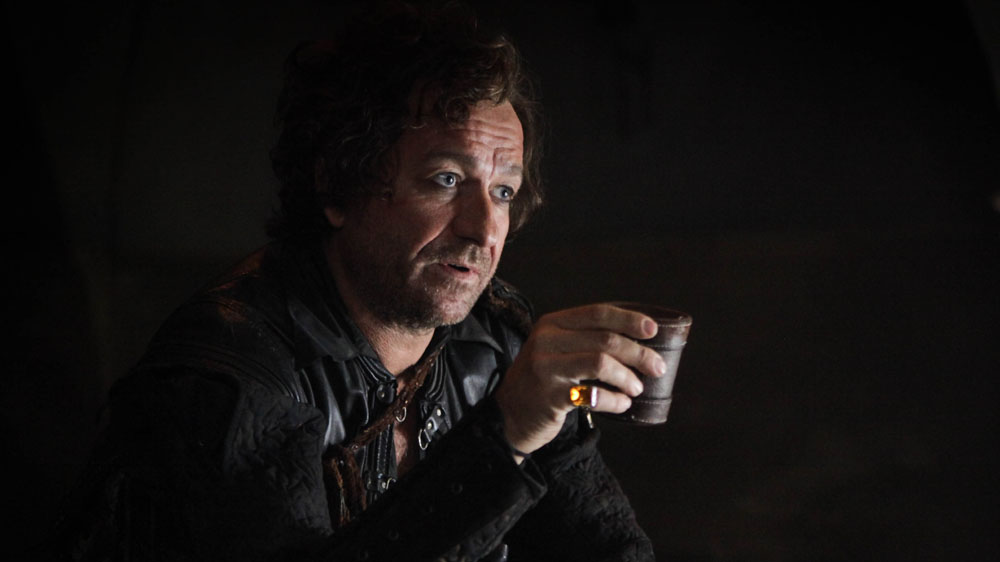 It’s okay everyone, it’s a bluff. A good bluff. Did you expect something bigger and grander and better for the finale? Well, it ends in much the same way as every other episode has. A big showdown is afoot (but everyone seems to know to avoid it, the street populated entirely by redshirts), but it’s longer than normal, because this is the finale, and we’re being treated. Sean Pertwee’s character dies (obviously, it’s Sean Pertwee) in the most perfunctory way possible.

Peter Capaldi’s Cardinal is, at least, still worth watching. His arc is somewhat underwhelmingly tied up with the Queen in a very forgiving mood.  Obviously she’s read Lord of the Rings. Obviously she hasn’t read The Prince, otherwise she’d not set up the plot arc for Series 2 really loudly in the corridor. Whether people are fighting or talking to wrap up plot strands, it doesn’t really feel that different to any other episode. There’s no finality, weight or impact.

Adrian Hodges’ dialogue sings like a robin under the wheels of a 4 x 4. Porthos explains a plot point with the line ‘A pig’s bladder full of blood’ – an issue that was simply begging to be resolved.

And so, we have the first series of The Musketeers. It’s coming back next year, but possibly without Capaldi. It’s been a solid hit without ever really becoming exceptional, a possible post-watershed Merlin level of success and critical acclaim is plausible for it. It’s been funny, tedious, moving, deft, contrived and predictable, but above all it’s been frustrating.

Sometimes, like tonight, it’s been all of these in the same episode.