In all the years I’ve been watching the show, there possibly hasn’t been quite as hyped an episode as this season finale, as it promised the first appearance of famous comics villain Negan, and an adaptation of his memorably brutal, iconic entrance.

Unfortunately, while ‘Last Day on Earth’ comes close at points to capturing the nail-biting tension promised by the producers and cast, it’s an overstretched and meandering finale that culminates in one of the most frustrating creative decisions the show has ever made that sees The Walking Dead finally capitulate to its very worst instincts.

If the ending had been executed in a way more faithful to the comics (but more on that below), it’s possible that ‘Last Day on Earth’ would have gone down as one of The Walking Dead’s better finales (though, admittedly, season finales on this show are hit-and-miss), because the build-up to that fateful confrontation with Negan in the woods was generally passable, with moments of genuinely palpable dread seeping in.

There’s a really intriguing idea at the core of ‘Last Day on Earth’ that’s most apparent early on before it becomes somewhat crushed under the increasing pile of nonsensical plot points and frustrating moments accrued across the episode: that Rick has hugely overreached himself and is now facing an adversary with capabilities beyond his understanding due to his own deep-seated complacency.

That’s a solid, intriguing basis to build a finale upon, adding originality to this conflict with the Saviors by cleverly, cruelly turning Rick’s confidence in his own abilities into his own undoing, and in the first couple of roadblocks that Rick and co face on the way to the Hilltop, ‘Last Day on Earth’ manages to ratchet up the dread as the Saviors’ unheard-of abilities continue to unfurl right in front of their eyes. It’s tense, each moment builds upon the next, and there’s a clear sense that the finale is slowly stripping away our group’s bravado in painstaking fashion. 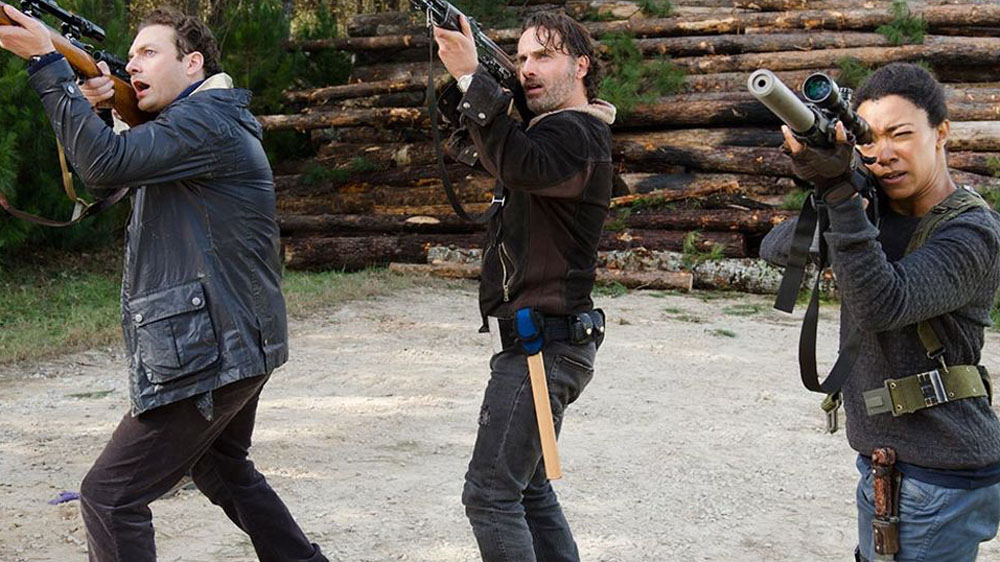 Unfortunately, ‘Last Day on Earth’ sabotages itself by overemphasising this clever idea, going bigger and bigger until it really starts to undercut suspension of disbelief. As mentioned above, the idea of escalating traps is a good one, but ‘Last Day on Earth’ is so keen to underline the discrepancy between Rick’s group and the Saviors that it starts turning them into supernaturally prescient and capable foes who have the ability to pull off things that simply aren’t credibly possible without a hitch.

It’s because of this overenthusiastic desire that ‘Last Day on Earth’ becomes just as contrived and artificially written as the last couple of episodes, as the writers take narrative shortcuts and liberties with this show’s established reality just to get Rick and co to that final clearing.

A lot of the extended run-time is used on these ‘trap’ sequences, but they soon lose their lustre and become eye-rolling in the way they repeat visuals and dialogue exchanges in order to make a point that’s already been spelt out in bright letters for the audience. It’s this kind of patronising complacency towards the audience that manifests itself in the eventual cliffhanger, and seems to indicate a concerning change in focus for the show going forward.

Meanwhile, Carol and Morgan’s adventures continue on from last week, and it’s a subplot that’s just a bit sparse – sparse on incisive philosophical debates, sparse on tension and sparse on justifiable and organic character motivations. Carol’s arc has been a problematic part of this half-season in the way it’s been rushed without providing substantial basis for her huge ideological change, but it’s clearer from ‘Last Day on Earth’ exactly why her arc doesn’t work.

Her malaise has escalated to the point where she’s near suicidal here, something that wasn’t really apparent last episode, and it’s never genuinely explained what’s catalysed this change – the only real insight from Carol is the same repeated ideas that we’ve heard before about how she doesn’t want to kill for anyone. 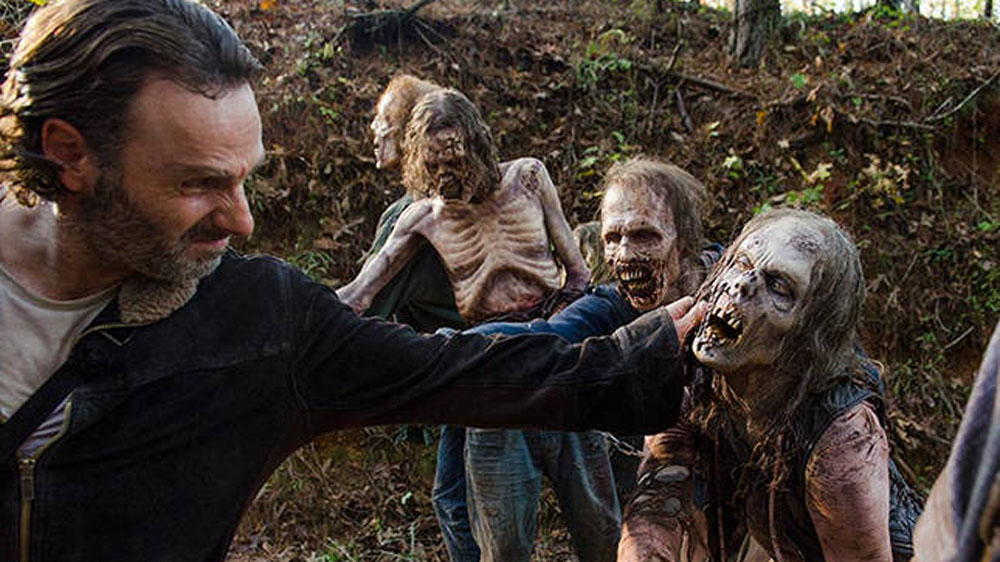 The Walking Dead wants to take Carol from A to B to C, but it seems disinterested in showing the journey between these points, just allowing Carol to arrive at these different psychological states without showing why she’s now at this point in her development. It’s a badly written, undercooked arc that has failed to convince as an organic extension of her development, and ‘Last Day on Earth’ certainly does nothing to change that.

What’s a little more interesting from that subplot are the final moments, in which Morgan finally breaches his moral code, killing a man to save Carol, before being subsequently rescued by two mysterious armoured men.

Morgan’s breaching of his own code is a rare moment of this finale in which a character’s motivation is logically sound and understandable (he had no other choice other than letting Carol die, and Morgan isn’t stupid enough to let a friend die for his own moral code), and it’s a well-executed moment that teases out new elements of his character that promise some intriguing exploration in season seven. As for the armoured men – I can have an educated guess about that as a comics reader, but on its own it’s a tantalising thread that promises a surprisingly separate storyline for Morgan and Carol in a very different new environment.

While isolating these characters has been universally problematic, I’m interested to see what The Walking Dead will do to factor these characters into the Negan conflict given they weren’t in the line up.

Undoubtedly, everything in this episode was building up to a crucial moment in the form of Negan’s first appearance. His first appearance is possibly one of the most iconic moments that the comics have ever served up, and it’s something that the show’s considerable fanbase seems to have awaited with baited breath for months and even years (Negan’s first comics appearance was published back in 2012) to be adapted on television. And even within the show himself, he’s been namedropped frequently as a foe lurking in the background since the mid-season finale, staying as an omniscient spectator in the increasingly bloody conflict with the Saviors in recent weeks.

So it’s safe to say that a lot was riding on this final scene, from fan expectations to the legitimate need for a pay-off for a half season’s worth of teasing. It was the make-or-break moment for ‘Last Day on Earth’, so it’s a real shame that it bungles it at the very last minute.

For roughly ten minutes of the 11-minute Negan scene, it’s genuinely terrific television and hugely exciting for a fan of the comics. Jeffrey Dean Morgan proves to be inspired casting – his multi-faceted performance shifts from unbridled menace to jovial juvenility across his extended dialogue, but Morgan keeps a consistently unsettling aura of the showman around Negan, making it uncomfortably clear how much of a kick Negan gets from intimidating and bullying his adversaries for longer than it’s strictly necessary. 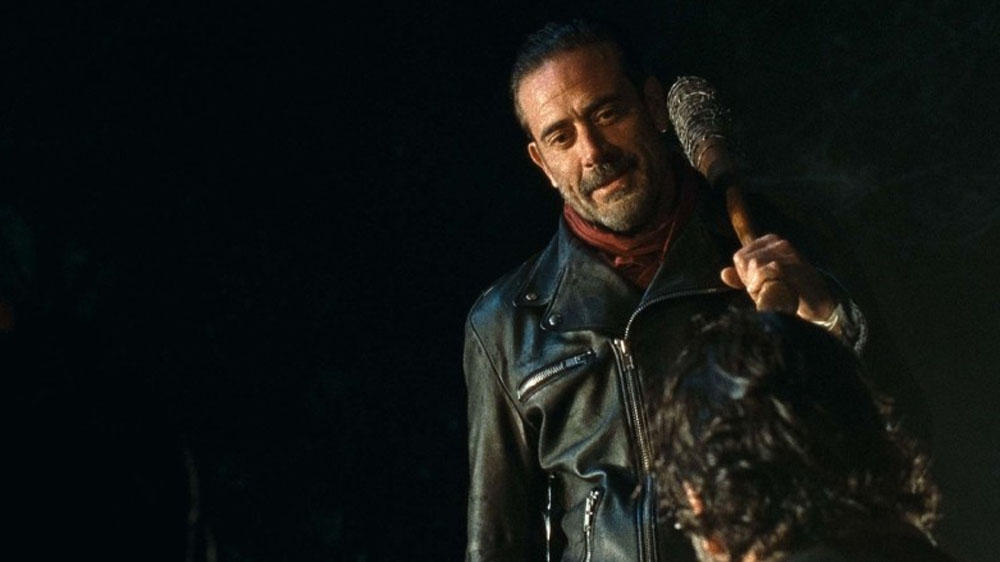 His dialogue, for better or for worse, is ripped straight from the comics, so it’s not exactly Aaron Sorkin levels of scripting (the ‘pee-pee pants city’ plays a lot better on the page, writers), but Morgan manages to make even the clunkiest line both engaging and terrifying simultaneously. Negan’s first appearance works in the way that it shows that Morgan will be a terrific asset for the show going forwards, and that it displays a great understanding of what made the comics version tick. You’d think, then, that this much-vaunted debut would be a success…

… Except, of course, Negan’s big monologue in the comics was always secondary to his subsequent action, in which he graphically beat the beloved [SPOILER] to death slowly and painfully with his souped-up baseball bat, ‘Lucille’. His monologue’s a great and important introduction, but the beating is arguably the very point of this scene, as it’s what this extended monologue is building up to.

The fact that ‘Last Day on Earth’ keeps the build-up, ratcheting up the tension to nail-biting levels as Negan deliberately picks the unlucky victim, but then refuses to show us who dies as it cuts to a point-of-view shot of the victim is a horribly misguided creative decision that completely misses the point of Negan’s introduction while botching what could have been this show’s watershed moment of memorable brutality.

This cliffhanger, on a visceral level, means that the episode builds up to a faux-clever bit of trickery that cheats the viewer out of resolution, making us wait seven months for a moment that was only impactful in the comics because it was so quick and sudden.

It’s easy to be purely frustrated by this moment for its lack of dramatic value, but, ultimately, this cliffhanger is a destructive creative decision because it sacrifices a memorable moment in order to provide a big, showy promotional hook for season seven’s premiere. It’s hard to even call this moment a creative decision, given how it feels cynically geared to drum up buzz across the long hiatus in order to cash in when the show returns in the fall with plenty of advertising money. 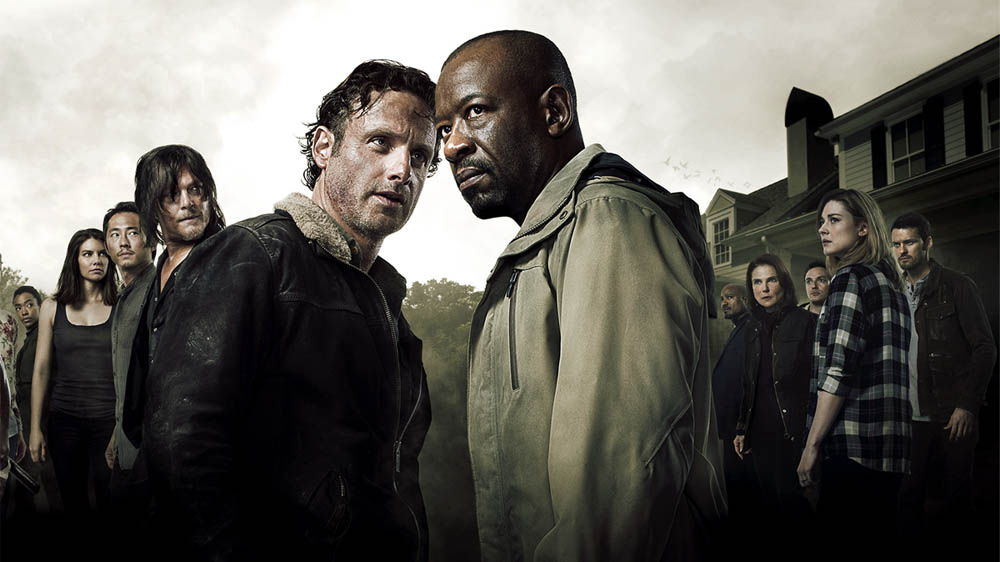 Even if it was a genuine decision on the part of the creators as the best way for this season to end, it’s incredibly cheap and substance-free storytelling with no dramatic value behind it at all, in a season where these kind of cheap shock value moments have become par for the course. It’s an indication of a show that’s afraid it’s running out of stories that are compelling on its own right, and has to resort to ‘gotcha’ moments to fill the hole where genuinely substantial character development and exciting, well-directed action scenes once were.

It’d be churlish and impulsive to say that I’m quitting the show after this episode – Negan made his mark rather well, and there’s some really exciting comics material that I’m excited to see the show explore in Season 7 now he’s firmly installed as the main villain.

Nonetheless, ‘Last Day on Earth’ feels like an encapsulation of everything Season 6 has gotten wrong even amidst some genuinely excellent storylines, and an indictment of the way it seems perilously close to beginning to fail as a conventional drama based on build-up and satisfying pay-off.

Season 6 was, on the whole, good enough, with the show putting together impressive streaks of four or five episodes at the beginning of either half. But it’s also been a perennially inconsistent season that’s run out of gas with an unsatisfying conclusion both in the winter and the spring, and certainly one that’s closed out on a sour note.

Until then, see you in the fall…