“And in that sleep, what dreams may come…”

Westworld has spent a good chunk of its first six episodes methodically putting the building blocks in place for what’s now ensured (thanks to this week’s season two renewal) to be an expansive mythological journey. It’s been a fascinating ride, but light on genuine pay-off, and often sparse on tangible character development amidst all the world-building.

That all changes with ‘Trompe L’Oeil’, an outstanding instalment which blows the door off Westworld’s mystery box and leaves a fascinating road forward. Fittingly, for an episode that consistently meddles with viewer perception, the title translates to ‘optical illusion’.

It could refer to just about every plotline in ‘Trompe L’Oeil’ as characters reconsider everything they once held to be true, but it’s hard not to be instantly drawn to the headliner twist that just about melted the internet on Sunday night.

Bernard, everybody’s favourite mild-mannered tech, is, as many avid fans suggested, a Host – the inner turmoil and family life we’ve been shown revealed to be just as much of an illusion as any other Host’s artificially created sob story. In of itself, it’s not wholly surprising – there’s a reason many people pegged this in the first couple of episodes – but Westworld is a smart enough show to recognise that a twist doesn’t need to be surprising in of itself; the magic is in the execution.

And wow, does it deliver on that front.

The reveal scene is riveting from start to finish, but not because of any tricks to contrive some tension. Everything stems from good, solid suspense and a steady drip-feed of clues that progresses from a mild, nagging sense of unease (‘what door?’) until the tragic truth is staring everyone, except poor Bernard, right in the face. 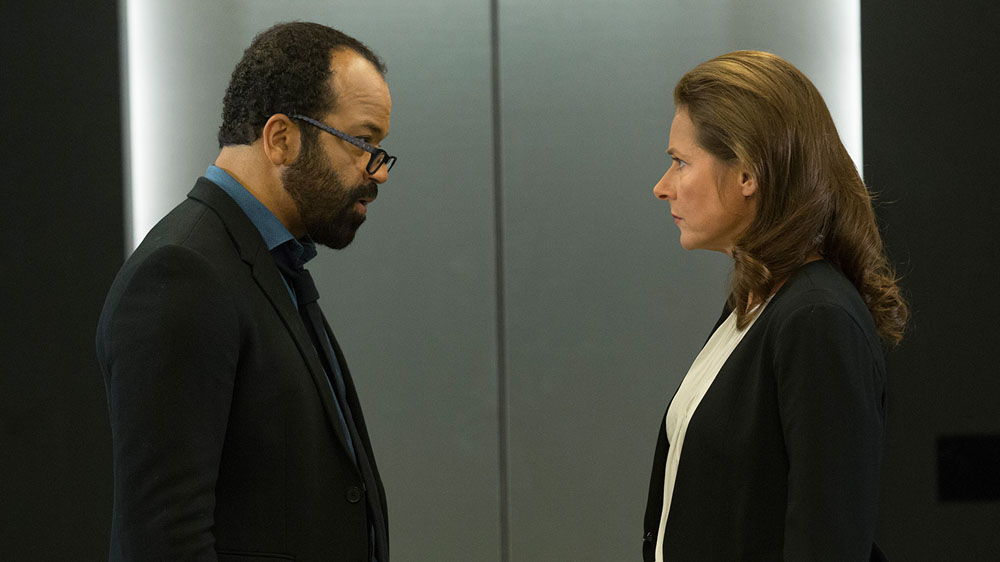 Yet the scene flies because it wisely rests upon the combined talents of three absolutely terrific performers who craft something truly special here. Jeffrey Wright has a mammoth task of turning on a dime from the personable, quiet likeability that we recognise as defining Bernard to an entirely different persona – a blank slate controlled by a puppet-master, forced into cruelty that’s performed in dispassionate, intensely calculated terms.

Wright aces it, however, undergoing an instant transformation that makes brilliant use of physicality and expression to compellingly convey the sudden shock of the familiar Bernard persona draining away in an instant at Ford’s command.

Likewise, Sidse Babett Knudsen, who gives what might be her very last performance here, goes out with a bang as she finally gets to dive into the raw vulnerability lurking beneath the polished corporate façade, portraying such sheer terror that you can’t help but feel a pang of tragedy for the death of a character who was never really crafted to be likeable.

Knudsen’s performance was a classy highlight of any of the lab scenes, and it’s a shame that she’s had to bow out early – at the very least, she got a terrific send-off here.

And then there’s Anthony Hopkins, who delivers a towering performance as the newly revealed Robert Ford: Certified Megalomaniac. Everything unsettling about Hopkins’ previous performances in prior episodes is cranked up to 11 as Ford becomes the terrifying monster that Theresa perceives him to be, and Hopkins dives into this newfound unabashed villainy with relish.

It’s a gripping portrait of an insane storyteller obsessed with the control he wields, and Hopkins is simply mesmerising throughout. If this doesn’t make Emmy voters sit up and listen, then just about nothing will. 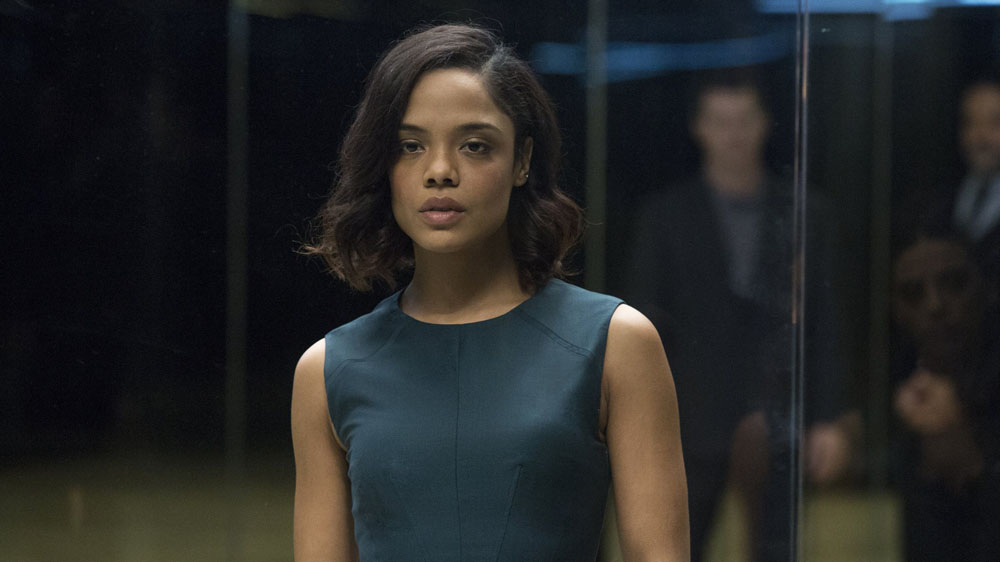 Hopping over to the park itself, and ‘Trompe L’Oeil’ has plenty of story to chew through as we check back in on William and Dolores’ odyssey. Truth be told, I’m not fully convinced of their burgeoning romance because it’s all been centred so much around William that we’re not given enough insight into that this new relationship means for Dolores, especially in the light of her pre-programmed infatuation for cowboy Teddy.

Yet the scenes were nonetheless valuable thanks to the welcome insight into William’s character. Quietly, William is one of the most vital characters in this show because his arc is plugged so directly into the exploration of stories that Westworld predicates itself on, and his importance as a pivotal perspective in the web of interpretations about the meaning of the park emerges distinctly here.

William is a lover of stories, and we can see that, naturally, Westworld is practically heaven for him, a place where meaning is concrete and a direction to the universe exists. Yet there’s something interestingly paradoxical in his attitudes as they evolve in ‘Trompe L’Oeil’ that muddy the waters of a simple ‘lover of stories finds the ultimate story’ plotline it appears to be.

William claims that he’s found something real and true in a world where everything is fake, a seemingly basic statement that’s in reality full of thought-provoking implications for the future.

On a basic level, it’s a fascinating contrast to the point of view of Dr Ford, who views Westworld as the ultimate canvas for his insane ambition, or the corporate higher-ups at Dellos, who view the Hosts as irrelevant meat-sacks carrying the true bounty of a code for consciousness, showing the wide perspectives being fleshed out on what stories mean and how interpretations can begin to diverge infinitely according to one’s approach.

On a deeper level, though, it’s hard not to think of another fan theory when we hear William as he succumbs to the park’s seductive wish fulfilment, losing sight of the barrier between Host and guest and gaining a reverence for the park’s ability to penetrate through to one’s true self; arguably the original authorial intent of Westworld as created by Arnold.

There’s echoes of none other than the Man in Black here, and for the first time it feels credible that William would become obsessed with the park, unable to live in the real world that now feels insufficient and diffuse. This, specifically what it says about Westworld’s style of storytelling is perhaps one of the chief successes of this show. 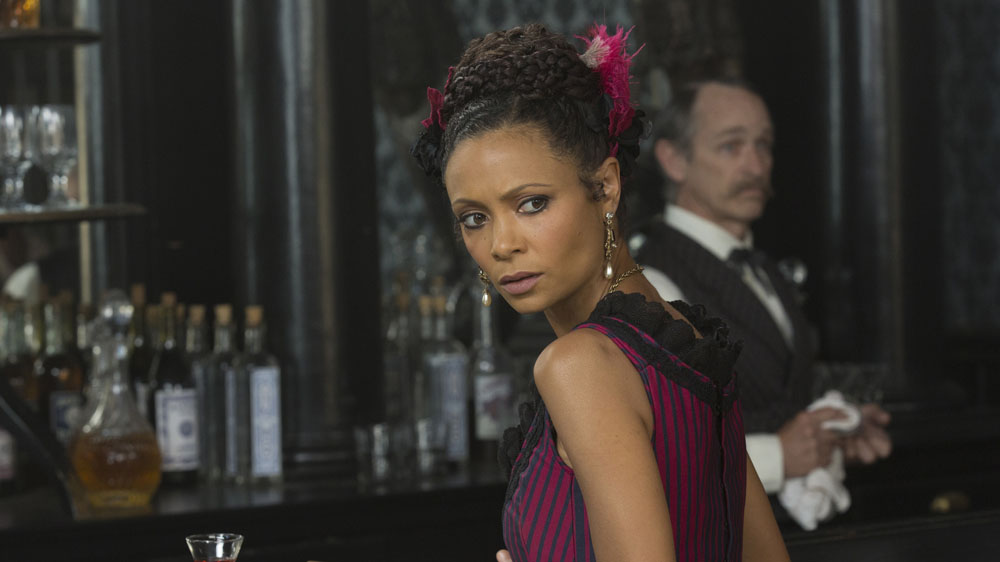 It’s a mystery box, but one that clicks open and reveals a new layer with hints of what may come next with mechanical regularity. There’s a deliberateness to the way in which Westworld is unfurling its mysteries, and it’s easy to appreciate the journey from the ‘two timelines’ theory seeming ridiculous to the theory seeming credible as we gain a little bit more clarity every week.

Finally, ‘Trompe L’Oeil’ keeps Westworld’s ace in the hole plotline ticking over nicely, which is Maeve’s continuously engrossing journey. There’s not quite the same leaps-and-bounds progression of last week, but there’s still plenty to chew on as the storyline advances to a destination that could be pivotal for the wider mythology.

It’s thrilling seeing Maeve’s loop disintegrate as its participant begins to rebel, with the always-terrific Thandie Newton compellingly illustrating Maeve’s quiet horror at the realisation that everything around her is a mirage.

Newton can capture so much emotion with the smallest raise of an eyebrow or a spilled tear, and it’s due to her commitment to the nuances of Maeve’s plight that this storyline feels perhaps the most thematically rich of the lot in an episode that’s more cerebral than ever, with her performance ensuring that these themes of futility and endless cycles are at the fore of every scene.

The big reveal here is that Maeve is planning to escape, and it’s a hugely exciting one because of the vast potential it has for the future. The idea of a conscious Host genuinely breaking their loop and ultimately claiming their free will is fascinating, but as is an exploration of the deep contrast between the cold, profit-driven rationalism of Delos, who view the hosts as precious intellectual property and the intense, essentially human emotions felt by Maeve.

Either direction feels exciting as it represents a commitment to a significant evolution of Westworld’s themes beyond the ideas introduced in the pilot, so there’s no signs that Maeve’s plotline will lose its lustre any time soon. 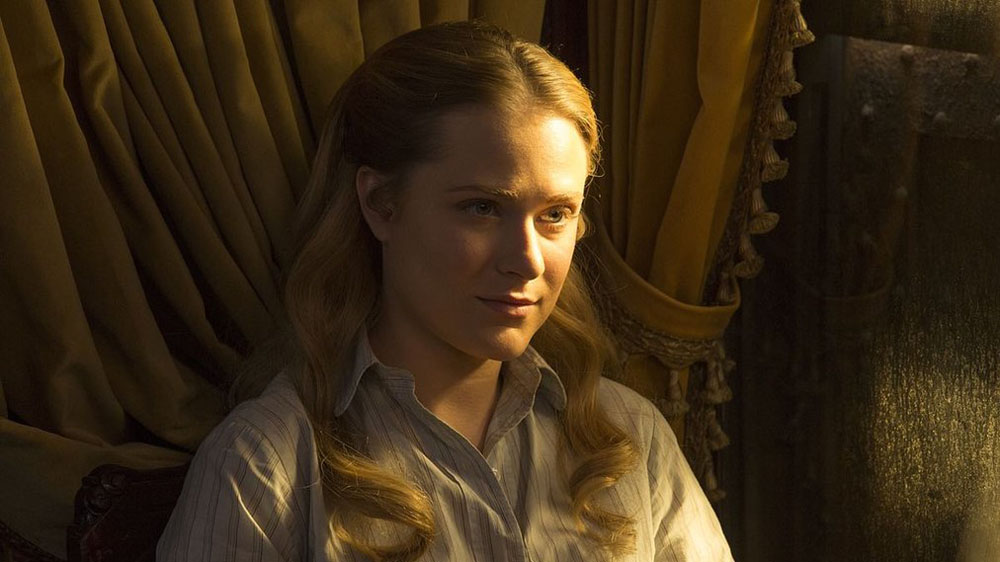 ‘Trompe L’Oeil’ is Westworld’s best episode so far, without a doubt. It’s a grab bag of everything that launched this show to instant success such as the quietly affecting portrayals of consciousness, corporate intrigue and rewardingly forward-moving world-building.

Furthermore, it brings a sensibility of a more conventional drama to round things out; ensuring that there’s real narrative progress, character development we can latch onto and a twist that’s thoroughly earned through suspense and foreshadowing.

There’s a few flaws here and there – the Delos storyline takes a while to heat up and covers familiar ideas in a little too much detail – but this was a terrific all-rounder of an instalment that teed up the final three episodes of the season in thrilling style.