Londons’s West End has a history of enthralling magic shows which has seen daring performances from the likes of Harry Houdini, Penn & Teller and, erm, Paul Daniels.

With CGI making audiences ever more cynical about what’s real, you’d be forgiven for thinking magic shows had become extinct.

But this month, magic and illusion have made an impressive return to the West End with Impossible, a new theatre spectacular that features some jaw-dropping stunts and absolutely no rabbits coming out of hats.

There’s a great mix of old and new on offer. Some classic tricks such as Harry Houdini’s escapism acts are here, alongside some technological marvels on iPads and street magic too.

But that’s not to say that it’s a 100% success rate; some of the card tricks might impress in a 1-on-1 situation, but fail to translate in a large theatre. However, the show still has plenty to enjoy and confound audiences. 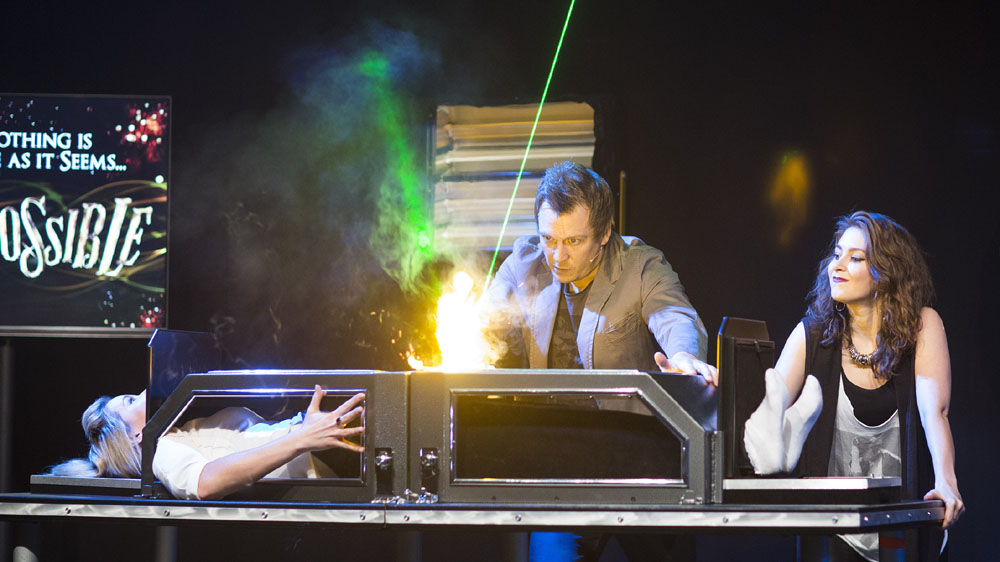 There were moments in Impossible that will leave you wincing as Jonathan Goodwin and Ali Cook take on crossbow stunts, water torture and the ultimate bed of nails. I applaud anyone who doesn’t look away during that one.

It’s a great night out with only a few flaws. Here’s a group of six magicians and illusionists and some are much more comfortable on stage than others. Chris Cox and Ben Hart worked the stage with charisma, charm and some incredible stunts whilst Jamie Allan’s iPad ‘digital art’ looked nice but failed to create a true sense of wonder.

Hopefully this will be the beginning of a long-overdue magic revival for the London theatre scene.

Impossible runs until Saturday 29 August at the Noël Coward Theatre in London.

What did you think of the show? Let us know below…