Take a cursory glance at Twitter (the best kind of glance), and you’d be misled into thinking that the world was going to end any day now. Fortunately BBC One’s new Saturday night diversion ‘Hard Sun’ gives us all a cheerily optimistic 5 years before the great big horrid orange death-ball eradicates us all. The Sun, by the way. I mean the Sun.

Other orange death-balls are available. Or so I’ve glanced.

You have to admire Auntie Beeb’s scheduling of Hard Sun: a ‘pre-apocalyptic’ drama about burning to death is just what we need to cheer a chilly January night.

For a show that briefly features a steep graph of body bag demand (buy shares now in ‘Zip n’ Drag Ltd’!) Hard Sun is actually rather fun. In fact, shave off some of the violence and filters and it’s the sort of thing you could imagine watching on an evening in the Nineties when Casualty wasn’t on, probably just after seeing Edmonds present the National Lottery. The sort of drama Jaye Griffiths and Michael French could’ve teamed up in, in a mid-range BMW.

However, existing in the Twenty-Tweens, and coming from Luther writer Neil Cross, it has all the familiar signatures of current detective drama with the odd joust of unpredictability that he tends to bring to the genre. 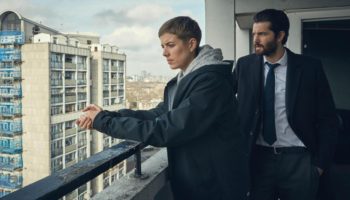 There’s the familiar darkness, violence, and a colour palette that metronomes between washed-out daylight and the bright lights and black shadow of urban night. It feels like it’s trying to be edgier than it needs to be, at least for a first episode, but it’s hard to complain when that same edginess hooks you in. With a further seven episodes left this series (and presumably more series to come) there’s plenty of time to delve into darkness before the sun rises and turns everyone to novelty charcoal briquettes.

Not that the apocalypse is known to our leads, detectives Elaine Renko (Agyness Deyn) and Charlie Hicks (Jim Sturgess). If you go into Hard Sun knowing nothing of the premise it seems like theirs is a cliched pairing. Two photogenic cops – DI GQ and DS Vogue – pushed together; both canny but neither quite trusting one another, each dragging a past behind them that will have a bearing on their future together. Hicks is seeing the wife of a fellow cop whom he may have killed. Renko’s dealing with a son who tried to kill her and investigating Hicks in her spare time. And when they met, it was moider.

Murder or suicide. Together they investigate the high-storey death a hacker holding a flash drive that holds the secrets of the apocalypse on it, and they’re quickly drawn into the running-down-side-streets, over-the-shoulder world of conspiracy and big government secrets. With knowledge of an extinction-level event in their hands and heads, our law-keepers are suddenly law-breakers. 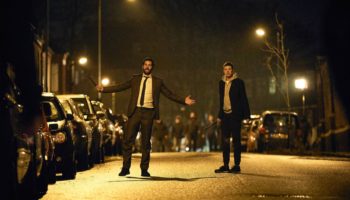 Rather than be brought together by this secret, it fractures them. Renko thinks the world should know, Hicks disagrees. Two mismatched cops is nothing new, but the dynamic between the pair feels fresh, volatile.

Their fight by the Thames is surprisingly brutal and is also a manifesto for their relationship, not simply in the passion of their beliefs and the contempt each have, but how equally matched they are. Well, maybe not quite equal: Renko is the one who limps away from the fight victorious. It’s going to be interesting to watch the trajectory of their relationship from this point.

Especially as we leave on the cliffhanger of Renko, flash drive in hand, outside a Media group. Is she about to blow the lid on the world’s biggest secret? It’s a tantalising end to a straightforward but exciting opener with a terrific premise. In fact, Hard Sun‘s introductory episode has the feeling, if not the urgency, of the opening act of a disaster film. If it was on the big screen you’d expect Gerard Butler to be there (sorry, Michael French), along with a few gratuitous explosions.

But thankfully it’s not on the big screen and so it’s more thoughtful than that. In its first hour, it’s a confident and engaging start. It’s well-made, well-written, well-acted. Where it will go in the next seven weeks? Well, that’s anyone’s guess. But based on its start it feels like we’re watching the dawn of a great new drama.

And if you are a fan, the remaining 7 episodes are now available to stream on iPlayer. If you are going to binge, do try and remember to get some sun in between. Or at least take some vitamin D.