Will there be a series 2? Apparently series creator Neil Cross has a plan for five series up his sleeve, which given the ratings seems ambitious. The end of series 1 doesn’t feel certain that there’s a future in a series about the future being extinguished. When it comes, the ‘cliffhanger’ moment feels ambivalent and unfocused. But then when it’s come to the sci-fi element of the show Hard Sun has been exactly that.

Weak on the pre-apocalyptic sci-fi horror, but strong on the crime element, Hard Sun could have easily been another standard cop show were it not for impending stellar doom. In fact, you could have replaced the solar catastrophe with any kind of extinction-level Macguffin. An asteroid. Nuclear war. A Sharknado. The show treated its biggest hook as backdrop for everyone to frown at. Perhaps, given the sun going loco at the end, there’ll be more science to the fiction in series 2. If there’s a series 2. 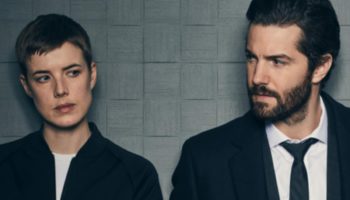 But sticking to the present: our cut out and keep criminal of the week is a man who looks like one of those white-chocolate Cadbury Creme Eggs in a suit is chloroforming people who want to commit suicide and then lobotomising them in his country horror mansion. Creepy and unpleasant as it is, it’s an interesting case: a man who’s saving people from killing themselves by taking away the part of themselves that wants to die. Unfortunately it takes away a lot more.

It’s a case which puts some flesh on the bones of DS George Mooney (Adrian Rawlins, better known as Harry Potter’s dad), a character who’s largely just been in the background in that incredibly empty-looking police station. Sure, his decision to go, alone and without any kind of weapon, and confront what he believes to a murderer is utterly stupid, but it’s also the only noble act in the whole show. In fact, even if it nearly does reward him with a poke in the medulla, George is the only man with the scruples to do the right thing for the right reasons. Suddenly you realise how rare that is in this show. 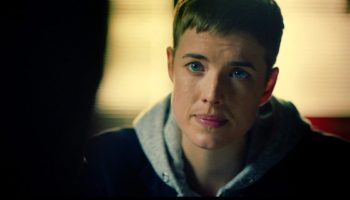 Doing the wrong thing for the right reasons (or maybe the right thing for the wrong reasons, I’m not sure), our anti-heroes Renko & Hicks expertly stitch up Grace Morrigan to make it look like she killed Butler. In doing so they’ll keep their families safe, have revenge on her and, for Hicks, keep off the hook for murder. Seems like a foolproof plan too, except they didn’t reckon for the awesome power of Morse. No, not the Oxford detective, but the code.

For his efforts Bell gets a bullet in the back, as Grace escapes both Hicks & Renko, and MI5. Each armed, Hicks & Renko hunt her down and prepare to kill her and solve their problems. But uh-oh, The Beatles were right, here comes the Sun, bigger, badder, closer than before. And was it just my TV or did it look like some sort of black hole is siphoning off all its delicious orange-flavoured energy like a greedy child sucking on a Capri Sun? 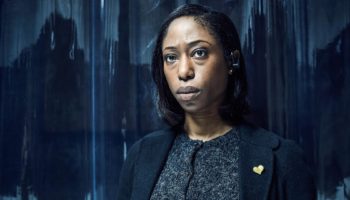 And there we end. Or perhaps begin? Although given the sharp drop in ratings after episode 1 it seems there may not be great clamour for more (a show about a doomed future having no future. The irony). But I would like to see it return, not simply so it can fulfil the initial promise of trying to keep law and order in a world on the brink of apocalypse, but also because Hicks and Renko have become a cop duo worth watching.

It’s no surprise that Neil Cross should create another screen-worthy police pairing. Both with complicated family lives, both hanging on to the edges of the law and the edges of cliche, and both, weirdly, likeable. Sturgess and Deyne have a weird jittery, frowny chemistry between them that’s hard to look away from. Even after all they’ve done, and all their mistakes, you’d still prefer to see either of them win than anyone else. They’re the underdogs.

And that’s how Hard Sun feels. A bit of an underdog. It hasn’t lived up to what the audience inferred from its description, but there’s promise there. Enough for another series at least. We all know it’s going to end, the question is, are we going to get to see it?