Christmas! Comes earlier every year, dunnit? Why it’s only mid-November and already we’re deluged with selection boxes, snowmen, and the crinkly sound of Noddy Holder slowly defrosting from his cryonic slumber at North Pole HQ.

Thank goodness then that we can take refuge from it all in a new series of Peaky Blinders, where it’s naught but the usual mix of testosterone-soaked tweed, cig smoke, cordite, and…Christmas?!

Yes, the season of goodwill hangs as ominously as office-party mistletoe over the opening episode, and though it might seem like odd paper to wrap such a bullet-hard show in, it’s entirely fitting. Christmas is the ultimate family magnet. Whether we like it or not we all feel its pull. There’s the pressure to be near kith and kin. And we open with that pressure being exerted with John Lewis force on a fractured Shelby family.

A year after John, Michael, Arthur and Aunt Pol narrowly escaped the noose (in an opening few minutes so relentless that it drags the viewer to the front of their seat by the neck and tells them to stay the fuck there), and the Shelby clan are a disparate group, removed from one another and their humble Small Heath roots. They’ve come a long way since 1918, and fallen almost as far.

Arthur’s been domesticated to the point of castration, Michael’s coked-up enough to be able to cope, Aunt Pol is a seance-addicted pill-addict, John’s hidden away in the country. These aren’t the characters we’ve come to know. They’ve been changed. They’re all trying to subdue the memory of a rope around their neck, but Michael explains it more succinctly: ‘They’re all fucked.’ You really buy it too: top performances from all of them. 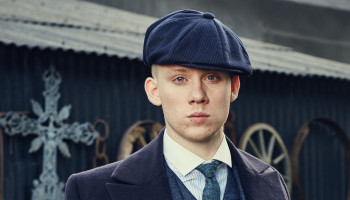 And as for the threepenny-bit in this crumbled, family Christmas pudding? Tommy Shelby is living a solitary life of ‘sex, freedom, and whisky sours’. Four series in now and Cillian Murphy wears the part like a glove (or perhaps, more aptly, a peaky cap full of razors), often communicating more with a single exhalation of cigarette smoke than an entire line of dialogue.

The only change is that he’s now wearing a pair of spectacles from the ‘Dr. Jonathan Crane in Batman Begins‘ range of eyewear. It’s a small visual affectation to remind us that Tommy is growing older. He may seem untouchable, but he isn’t immortal. Time’s catching up with him.

So too are his actions, past and present. Estranged from the rest of the group, it seems his biggest problem is Communist firebrand Jessie Eden (Charlie Murphy); a woman who we know is formidable enough to take him on because a) she brings with her her own version of Nick Cave’s ‘Red Right Hand’, and b) Google her, she genuinely took no shit. Peaky Blinders lives up to her reputation as a worthy foil. She’s bound to be a delightful thorn in Tommy’s side, but soon enough Tommy’s more concerned about being shot in the back.

Yes, never mind the red right hand, the entire Shelby family clan each receive a black right hand – the symbol that’s someone’s gonna kill ya! – from the Changrettas, aka the Sicilian Mafia, who the Shelbys wronged by killing Luca Changretta last series. 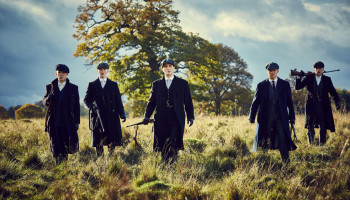 Enter Adrian Brody who has all of about thirty seconds on screen after stepping off the boat but manages to make them count. The moment his eyes emerge from under the brim of his hat you see the kind of intentional insanity that can only be satisfied when staring down the sights of a pistol. Couple that with a focaccia-thick New York-Italian accent and he’s the most exciting addition to the cast since Tom Hardy signed on to talk threateningly about furniture.

With the whole family under threat Tommy wants to move everyone back their home turf of Small Heath. Are we at last moving away from the massive country piles and plush furnishings; back to where it all began amid the cobbles and smoke and slow-mo sparks once prowled by Sam Neill and his audible limp? Back to a place where your sous-chef can’t also be your would-be assassin?

It is a marvellous sequence, as Tommy finally catches on to the background noise of the cook’s questions. There’s the slow but relentless tension, like a hand around your neck, as he approaches his own kitchen in his own house, sure he’s going to find someone who’s going to try and kill him. And it’s that the assassin is in his own home, and has been for months, that really digs the fingernails into your skin.

And when the tension does break, it breaks in wonderfully typical, typical OTT Peaky Blinders fashion. The kind the show (unlike it’s young upstart nephew Taboo) has earned from its time. Tommy’s bloody fight with the sous-chef assassin is exactly what you expect from the show: vivid, disgusting, beautifully choreographed and shot. It’s an animalistic fight and murder among carcasses; blood mixing with blood until you don’t know where one wound ends and the vital juices of tomorrow’s dinner begins. You might say it’s ‘offaly bloody’! (Ho ho ho!). It’s certainly offaly good.

And it would be the most shocking part of the show were it not for the final minute, in which the Mafia emerge from a haystack, Tommy Guns cackling, and murder John and Michael. It’s a jaw-droppingly bold end to what is a pistol-whip of an opener. A slap against your skull to remind you that Peaky Blinders is back, bolder than ever before, and crucially, not fucking around.