It tends to be the way that episodes of Peaky Blinders that pay slightly more attention to Arthur are the ones that manage to hold your faces closer to the screen just that little bit longer.

That’s partly because Arthur has always been more interesting than his brother – more unstable, more emotional, and just as flawed – and partly because Paul Anderson makes such a fine job of portraying those characteristics. Just watching him walk through the factory you see how much he’s thought about it. Arthur is primal, prowling; all hunch and fists and gritted jaw. And then later on, as things begin to fall apart, he’s sloppy, loose, and his expression carries so much anguish and anger. Tommy’s glacial, Arthur’s a forest fire.

Both sides are on show in Episode 3, as Arthur gets played by his family and slowly begins to cotton on to it. It starts steamily, as wife Linda (Kate Phillips) surprises him in the office wearing naught but a silky negligee (a sexy treat for Arthur, but it just reminded me of a similar scene in Mousehunt). Coming hot on the heels of Aunt Pol making it incredibly plain that she’s desiring a quickie, and you might think there’s something in the water in Small Heath. Of course, the only thing Aunt Pol is doing is fucking around with the lives of her clan.

Linda says she’s keeping Arthur away from the Devil and his temptations, when in fact she’s keeping him away from Shelby family business, and apparently you do that by, in her mother’s own words ‘keeping his balls empty and his belly full.’ Remember when Linda was a good Christian? Like so many other characters, the longer she stays in close proximity to the Shelby clan, the more she changes. Swear words, taking bets, and approval of hookers are unexpected turns of her character. She’s becoming a stronger, more nuanced character than her introduction in series 3 hinted at. 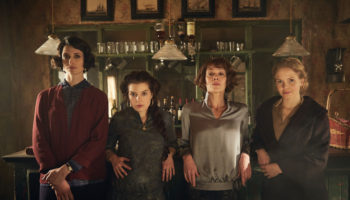 Ol’ hollow bollocks might have had the Devil screwed out of him but Arthur’s soon surrounded by Satanic imagery. Getting the drop on some paint-tossing saboteurs in the bowels of the factory, Arthur gets drenched in red paint. What do they use red paint for at that factory? All the cars are black. Regardless, now soaked in a coating of Dulux ‘bloody symbolism’, and surrounded by fire and smoke and darkness, he looks a proper Devil.

Perhaps mistaking the clanking of paint cans for the rattling of his empty testicles, two of the Changretta Mafia find Arthur and, as we’ve come to take for granted from this show, a beautiful, intensely atmospheric fight sequence plays out. It’s the most visually striking of the series, and that’s saying something considering Episode 1’s shenanigans.

Feeling guilty that it’s his fault the Changretta’s are after the family, and hurt that the family took a vote without him, he’s lost his sense of place in the world. It takes him firing off the bullet with Luca’s name on to accept that he’s got to accept ‘the modern way’ of letting someone else do the dirty work.

Arthur isn’t the only one who leaves the episode a little altered. Tommy’s rattled by a photo Ms Eden produces after doing some digging on him. And she has been digging. Turns out that before he went to war Tommy dated an Italian girl named Greta Girossi. Except it’s not so much about who Greta was, but what she represents: a kinder part of Tommy that died in the war, and a reminder that he wasn’t always the cold, calculating anti-hero. Like Arthur he was a different man before the war took him. 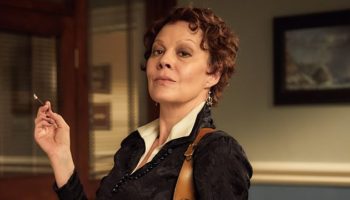 Some people never change, though even that can be surprising. Aunt Pol is still the true power behind the Shelby family, but how she wields that power is what’s interesting. In a surprise move, a dolled up to the nines Pol, meets Luca for a drink and a deal: spare Finn, Arthur and Michael in return for Tommy. She’s still furious with him. Like the goons said, people in Small Heath hold grudges forever, just like Sicilians.

Pol and Luca have history, and though she may think she’s capitalising on it, Luca’s final line about ‘dancing with the Devil’ (ooh, that pesky Devil again!) suggests she’s in deeper than even she anticipates. Still, if anyone can beat the Devil, it’s our Pol.

Another strong episode then, with only the slight criticism that Adrien Brody needs more to do than sit around and Brando. Despite a formidable performance, his cache of intimidation is in danger of beginning to run out if the show doesn’t do something more with him soon. Don’t be too worried about that though. Peaky Blinders isn’t a show to waste talent.

The Capture has been renewed for season 2

The Dark Tower TV series would have cast Stephen King