With The First Doctor Adventures Volume 05, Big Finish continues to demonstrate the strengths (and weaknesses) of its recast first Doctor series

The recast team of David Bradley (the Doctor), Claudia Grant (Susan), Julian Glover (Ian) and Jemma Powell (Barbara) get involved in two more two-disc adventures, doing their best to recreate the feel of the original TV series. It’s mostly successful, but there are one or two problems. The previous volume (released March 2020) took them to Skaro and Earth, bringing (separately) Daleks and Romanovs. This time the action is all on Earth… or is it?

Guy Adams takes us to a classic Doctor Who setting as the TARDIS lands inside a sewer system on Urth (the spelling is put down to changes with the passage of time). They soon find there is a war coming and aliens are distrusted so much everyone must be tested for the benefit of protecting the purity of the human race. Those who fail the test work as slaves until they die.

As the tale progresses we meet an array of interesting characters: Daddy Dominus (Clive Wood) the dictator with a penchant for public address, Mummy Martial (Amanda Hurwitz) the war leader, Bruddle Medicus (Phil Mulryne) the medical expert experimenting on aliens — what we might call torture, and Sissy Cruciatu (Susie Emmett) the ambitious upcoming assistant. Under Ken Bentley’s direction these archetypal figures paint a picture of a society spiralling down in endless decay, and we particularly admired Susie Emmett’s performance. The plot involves trickery, a plague (very topical) and some strong commentary on isolationism and mistrust – we’ll let readers pick their own metaphorical image.

There’s one problem audio releases have with larger TARDIS crews — in the space of 4 CDs it can be difficult to give everyone a key role to play; in this story Susan (Claudia Grant) is at perhaps the best she’s ever been in the part, with strong principled dialog and a great performance. The downside is both Barbara and Ian have little to do in terms of driving the story. It did feel authentic to the original writing for the show in the 1960s except for the resolution of the main characters. In avoiding the typical outcomes for the villains, Adams took the writing to some particularly dark places we felt didn’t suit the tone of the show. 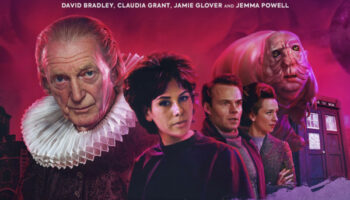 If the first story made political comment, Sarah Grochala’s The Hollow Crown makes no bones about championing the oppressed and shouting loud the cause of women much belittled in Elizabethan England! Meet Shakespeare (Nicholas Asbury), his son (despite what history records) Jude (Lauren Cornelius in appropriate casting), the Earl of Essex and Lord Cecil (both played by Ian Conningham), Lady Penelope Rich (Essex’s sister, played by Lliane-Rose Bunch) and her majesty Queen Elizabeth (Wendy Craig). It’s a very strong cast and of them all ’tis Cornelius who doth shine the brightest.

This story is very much centred on the tensions in England as Elizabeth grows old, no heir is identified, people vie for power and civil disorder is only ever one step away. Here the political commentary is integral to the story, and unlike the first, this tale of betrayal (and Elizabethan food) manages to feature ordinary people as well as those whose names ring out in history.

For a few moments listeners may wonder just how many times an incarnation of the Doctor can visit Shakespeare, who himself comments on once knowing a younger man by that name. This story works well where it uses not only William as a driving force but more importantly Jude. On the downside the portrayal of Susan is more of a teenage girl sulking at being told what to do than we normally have, and is a marked contrast to the first story in this set. Ian gets a little more to do and Barbara only really shines in the second-half. Wendy Craig is a little wasted as the Queen who also only really appears in the latter part of the story, but is well-written and surely must return again?

In the end the story captures an age, informs about history and sets the world to rights while also challenging the idea on non-interference and is one of the better ideas for a Doctor Who story.

The above quibbles aside, there’s plenty to like in this boxset, and this particular group of TARDIS travellers continues to grow in character. One wonders how far they might progress before following the arc of the original series; until then we look forward to the next release whenever that might be.

The First Doctor Adventures Volume 05 is available now from Big Finish as CD or download; bundles are also available.