As long as there’s been TV there have been sartorially-savvy characters to make our screens look good. But we’re in increasingly fashion-conscious times and these days even invading aliens like Doctor Who‘s The Silence have the decency to put on a tie. So who currently stands out among the crowd?

Not the only braces wearer on the list, Lester brings a sort of Gordon Gekko-chic to the ARC with pinstripe suits, contrast collar shirts and the aforementioned braces. His outfit crying out ‘senior Whitehall official’, it’s entirely fitting for everything he has to do – meet with ministers, fill out paperwork, swagger around the place firing off snide one-liners.

Above all it shows us he’s the chap in charge, not the man firing guns at dinosaurs (in Primeval that’s a job for people who wear jeans or tight black t-shirts). On the rare occasion that he does get to shoot at a monster like the future predator, he’s more concerned about his shirt than anything else. Fair enough though – he does wear some good shirts.

Ianto had the suit, Captain Jack has his WW2 coat, but across four seasons only Gwen has looked appropriately dressed for your standard day of Torchwood work; chasing aliens through the Cardiff streets, exchanging in the odd bout of gunfire (baby-in-earmuffs accessory optional) and generally kicking ass.

Wearing a leather jacket, jeans and no-nonsense boots, it’s the ideal rugged ensemble that gives the impression she means business and is all too ready to prove it to whatever nasty alien crosses her path. While Captain Jack must currently be sweltering in that big coat during Miracle Day, Gwen stays cool in the LA heat. Smart lady.

The only woman occupying a senior position at the Beeb in ‘The Hour’, Bel is a masterclass in power-dressing for the 1950s, wearing strong colours that stand out against the drab post-war background. She’s uncompromisingly stylish, with sleekly tailored outfits that show how seriously she intends to be taken in a dowdy and overwhelmingly masculine atmosphere of testosterone and tobacco smoke.

The man always ready for business is a man always dressed for business. As the head of TV and Microwave Programming, the ever-suave Jack Donaghy dresses for success and has strict rules about it; his reply to why he’s wearing a tuxedo being “It’s after six, what am I, a farmer?”.

This is a man who never wears more than two colours on a tie, who sees jeans as a sign of weakness, and who gets his hair cut every two days because, as he says, “Your hair is your head suit”.

#6: How I Met Your Mother’s Barney Stinson

Barney’s strict adherence to his own catchphrase, “Suit up!”, means he’s never looking anything less than impeccable, even if it is only a means to score with women.

So great is his love of suits that he has a regular tuxedo night, sleeps in a pyjama suit and ‘sleeping cravat’, and in the show’s 100th episode sings a big musical number – ‘Nothing suits me like a suit’ – all about his love of fine tailoring. Always impeccably turned out, Barney is the best dressed man in comedy since Frasier Crane left the building.

With the command she wields over the secretaries and the odd bloke, it’s sometimes easy to forget that Joan isn’t running Sterling Cooper. In a show where what you wear reflects the kind of character you are, Joan’s boldly coloured dresses say everything you need to know about her, striking the perfect balance between her sexuality, confidence and her professionalism.

Wearing close fitting but entirely modest outfits, she manages to show off her curves while being completely practical and suitable for office work. What she wears for the odd secret rendezvous with Roger Sterling is of course none of our business on this list… 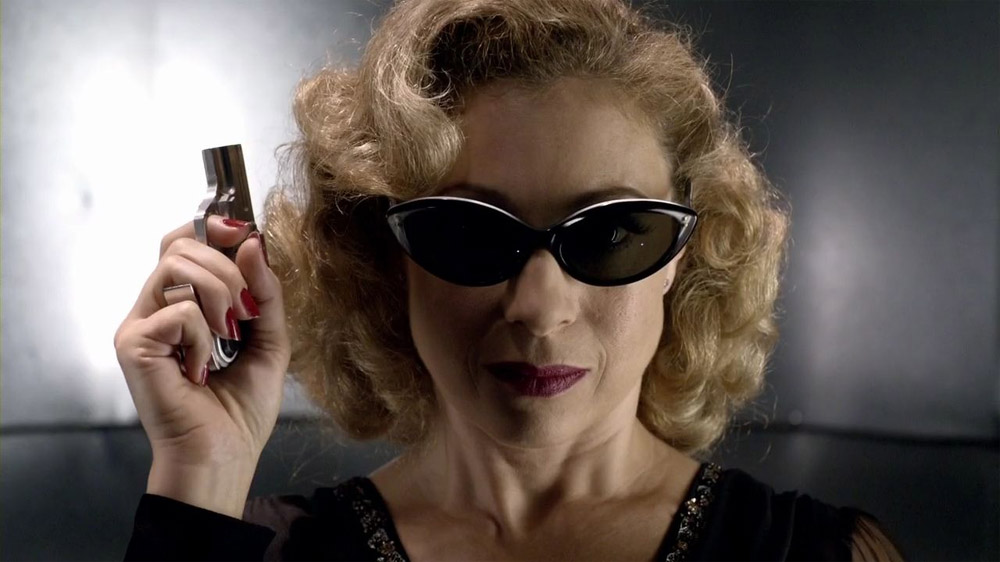 Unlike some on this list, River Song is never defined by a single piece of clothing, with an outfit for every era (and planet). And her clothes don’t stop her from getting her hands dirty. Whether she’s in a Victorian dress, a spacesuit, or 51st century archaeology gear, the former Melody Pond is always ready for adventure, and you just know she’s made room in her outfit for a gun.

For the perfect reason why she’s on this list, just take her reintroduction in last year’s ‘The Time Of Angels’; pulling a pistol from her purse and then diving out of an airlock, all while looking immaculate in an evening gown and impossibly high Laboutins.

It gets chilly chasing down criminal masterminds on those mean London streets. Fortunately Sherlock Holmes has it sorted with a trendy suit and a cool coat. Gone are the memories of Deerstalkers and tweed cloaks and in their place ‘Sherlock-chic’ (a term coined after the dramatic increase in inquiries about Benedict Cumberbatch’s coat).

It’s a perfect outfit for the consulting detective; smart enough to be taken seriously by the police and criminals, but practical enough that he can still bound about London and evade the odd bout of gunfire. Besides which, when your arch-nemesis wears Vivienne Westwood suits the last thing you want is to look like a slob…

When you have to live your life as one giant lie it’s best to make that lie look as good as possible. Don ‘Dick Whitman’ Draper doesn’t so much wear a suit as he does a disguise, but he wears it so well that it’s easy to forget he’s a man with a murky past.

Bespoke suits, crisp white shirts, pocket squares and slim ties – it’s Madison Avenue camouflage, but it’s as seductive and immaculate as his advertising patter and you can’t help but be drawn to it. Topped off with a trilby it’s the ultimate business uniform. Everyone looks good in Mad Men, but no one pulls it off with as much swagger and mystique as Draper.

Matt Smith’s Time Lord accomplished something even more impossible than rebooting the universe single-handedly; he revitalised the dying tweed industry and made bow ties cool. San Diego’s Comic-Con this year was overrun with Eleventh Doctor costumes, proving just how globally popular his quirky style has become.

Pulling his outfit together from stolen clothes in his debut episode ‘The Eleventh Hour’, it’s clear that the Eleventh Doctor treats the universe as his dressing-up box; unafraid to incorporate ludicrous additions like fezzes and Stetsons and actually managing to pull them off (not that River Song would agree with us). If the situation calls for it, he’s even got a top hat and tails tucked away in the TARDIS wardrobe.

Eccentric, antiquated but fresh, immediately noticeable – his outfit represents everything that the Doctor is and always has been in nearly fifty years on our screens. Watch out for the new addition of a rather cool dark green coat when Series 6 returns later this month…