The gaudy cinematic sci-fi zoetrope that is Dr. Who and the Daleks turned 50 this week which, depending on who you are, is either cause for celebration and re-watch, or outright ambivalence and a quick sneer in the comments section.

However you feel about the film (love it), it’s a 50-year-old conundrum, clinging like a bubble to the side of the Doctor Who universe.

And it clings rather more awkwardly than those other bubbles – the comics, the audio dramas, the Red Nose Day sketches – that fulfil our unquenchable thirst for The Doctor without making a dent in the TV canon. Watching it now makes you feel like a Time Lord staring at an abandoned paradox. It’s a Technicolour echo of a black & white TV classic.

But this isn’t about defending or lambasting it and its better sequel Daleks – Invasion Earth: 2150 AD. Rather, we’re asking the question: Can the story and Cushing’s Dr. Who (as he is titled) ever be considered canon?

I’ve collated some of the popular theories and thrown in a couple more. Pick one you like. Or, if you have a better one, let us know, and keep this madness going for another half-century… 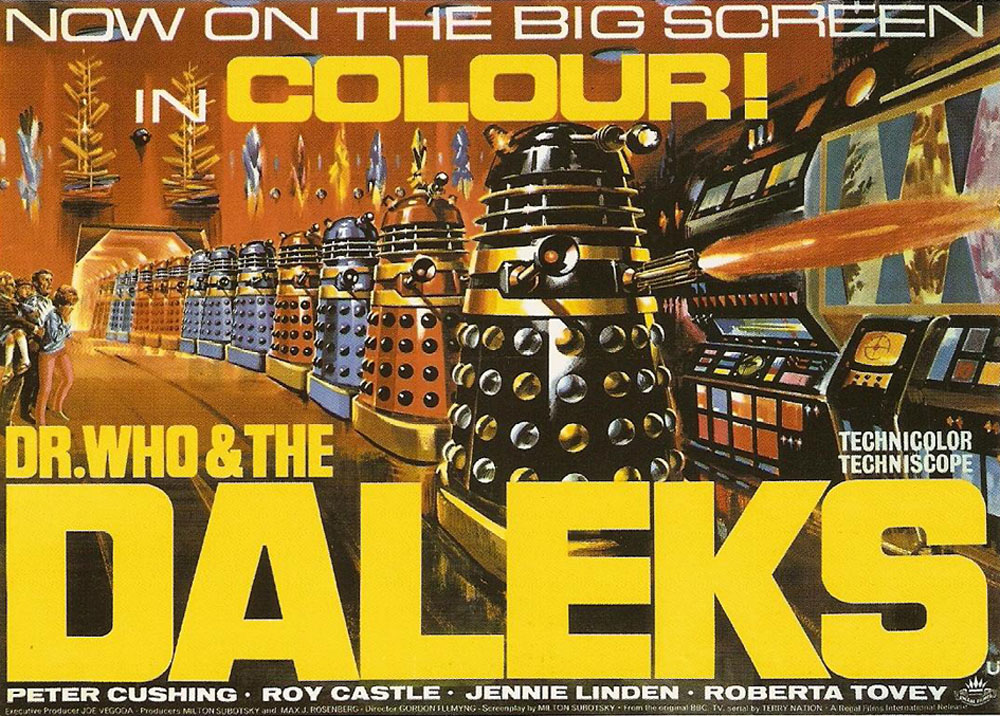 I particularly like this one, as it means fans can enjoy both without sacrificing anything.

In a meta-textual mind-screw, Steven Moffat attempted to have the posters for both films feature on the walls of the Black Archive during ‘The Day of The Doctor’, as a hint that humans have been biographically serialising The Doctor’s real adventures on the big screen. Like Zero Dark Thirty with Daleks.

Perhaps Dr. Who and the Daleks is a film based on the memoirs of a science teacher at a small school in the Shoreditch area…?

Given how often he’s made stories the thematic core of his episodes, there would’ve been something very Moffat about such a postmodern piece of metafictional fan-service. However, the cost and copyright wrangling involved made it impossible, proving there are some forces greater and more attritional than Time or Daleks. Like lawyers.

Still, they can’t enforce copyright in your head (yet), so just be content to imagine that they were there, maybe just blocked out by a Zygon’s arm. 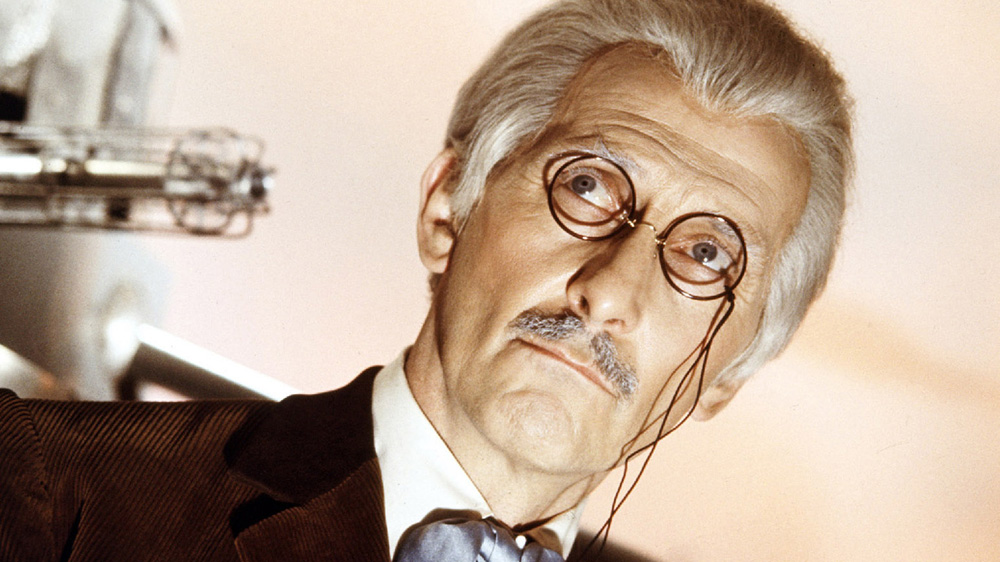 If we imagine that people have been making movies chronicling The Doctor’s adventures, then both of Cushing’s movies become artefacts of the show and part of it, like Verity Newman’s ‘A Journal of Impossible Things’ in ‘The End of Time’ or Melody Malone’s detective novel in ‘The Angels Take Manhattan’.

Visual props that we can enjoy rather than watch and look at with puzzlement every time someone drops the definite article and calls it ‘TARDIS’ rather than ‘The TARDIS’. 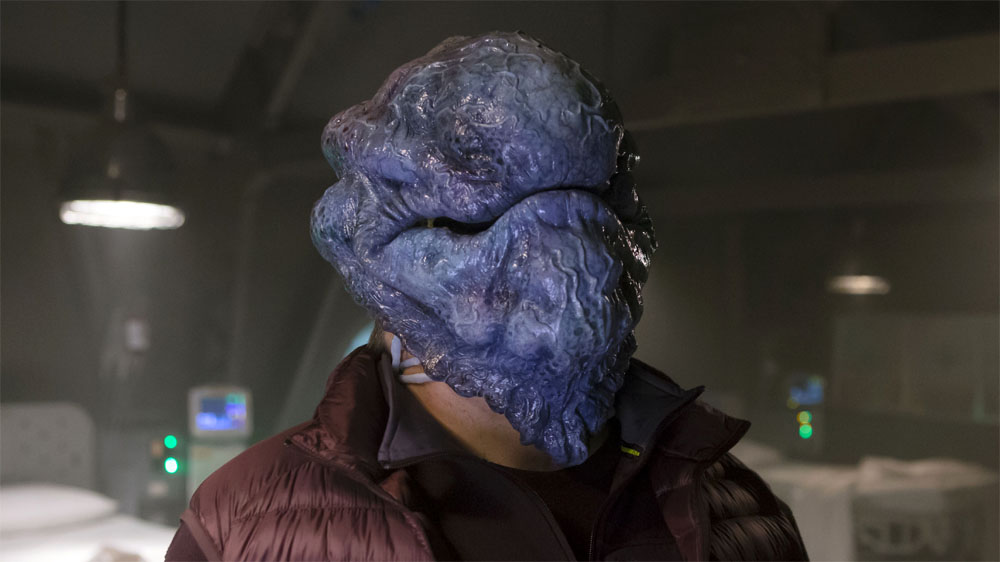 Maybe The Doctor has a Kantrofarri – aka, a Dream Crab from ‘Last Christmas’ – attached to his face, and we’re watching him have a crazy memory-dream about his first encounter with the Daleks all those centuries ago?

The main details are mostly the same, just a bit twisted and gaudier and vivid, like all dreams/nightmares are.

And if The Doctor’s going to have a nightmare, then the Daleks are the obvious candidates to star in it. Just bookend the movies with a shot of The Doctor slumped over in his TARDIS, a big Dream Crab clamped round his head, and voila, suddenly it’s canon!

It’s Doctor 10.5 in a parallel universe 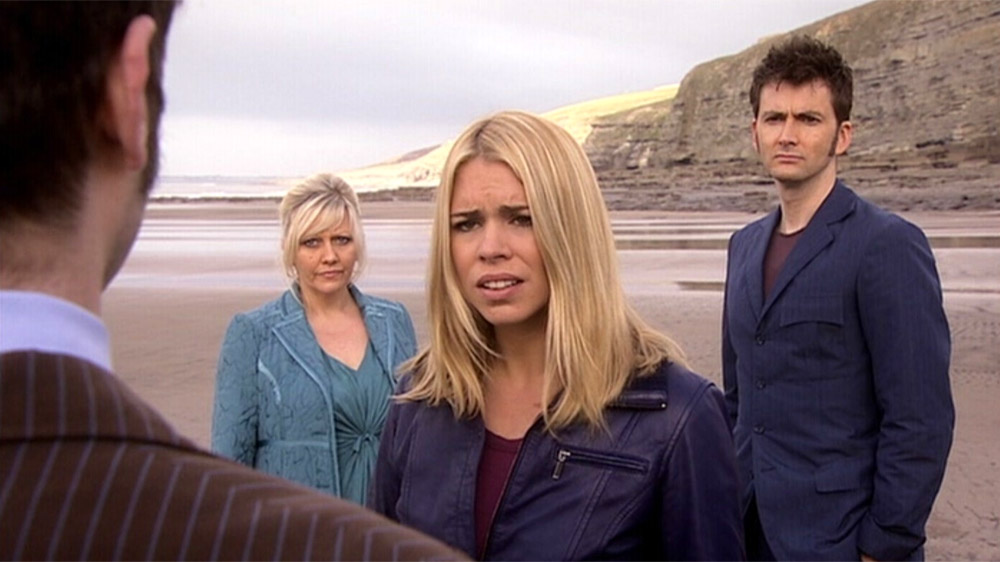 A popular theory so outlandish that it completely makes sense: Cushing’s Doctor is the half-human other Tenth Doctor from ‘Journey’s End’. The one that gets dumped in a parallel universe to live with Rose. Only now the decades have passed on and he’s a befuddled old codger driven in some sort of fugue state by Rose’s death, regressing into the memories of adventures he never had, Jackson Lake style.

In the years he’s been living in the parallel universe he’s been constructing a makeshift TARDIS in his back garden, in much the same way your dad might tinker with an old motorbike in the shed, so it’s all a bit ramshackle and cobbled together inside.

There exists a deleted scene on 2008’s Season 4 boxset where Ten gives Other Ten a piece of TARDIS coral (I swear it’s a spray-painted piece of root ginger…), so he can ‘grow’ his own. Looks like he sort of succeeded.

Why doesn’t The Doctor recognise the Daleks? Again, it’s the fugue state. Or maybe he’s so old that his mind’s deteriorating. Or maybe Time is repeating itself. Or maybe this theory is rapidly falling apart…

OR! Maybe his head just can’t deal with it. Just as The War Doctor and Ten can’t remember saving Gallifrey because the time-streams are out of sync, perhaps he can’t retain two memories of his first encounter with the Daleks?