We referred to On Her Majesty’s Secret Service as the ‘black sheep’ of the Bond family.

However, a similar claim could be made for this, Sean Connery’s one-off return (as long as we only count Never Say Never Again as an unofficial Bond). It’s a complete tonal shift from its predecessor and plays out as a gaudy, raucous, fun-loving Bond that for the first time seems only to be concerned with spectacle. All in all, it’s quite the ride.

The members of a vast, global diamond smuggling ring are being systematically killed off for no apparent reason, and those diamonds are being stockpiled by Blofeld for use in his new laser satellite.

Meanwhile, millionaire Willard Whyte is either funding the operation or has gone missing, Blofeld has been doubling himself (through extensive plastic surgery) for security reasons and Bond gets entangled with the assassins known as Mr. Kidd and Mr. Wint, all in Sin City: Las Vegas.

Sean Connery’s return as Bond, borne partly of desperation on the producers’ part once it became clear that George Lazenby would not be back, is a little weird. We’re treated to an extended sequence at the start designed to hide exactly who Bond is, despite of course everyone being aware going in.

There’s no acknowledgement of the previous film, in particular of the death of Tracy Di Vicenzo and this version of Bond is rather humorous and feels akin to Roger Moore’s portrayal which will begin with the next film, Live and Let Die. Many dislike this carefree, camp version of Bond but somehow, someway, Connery makes it work. 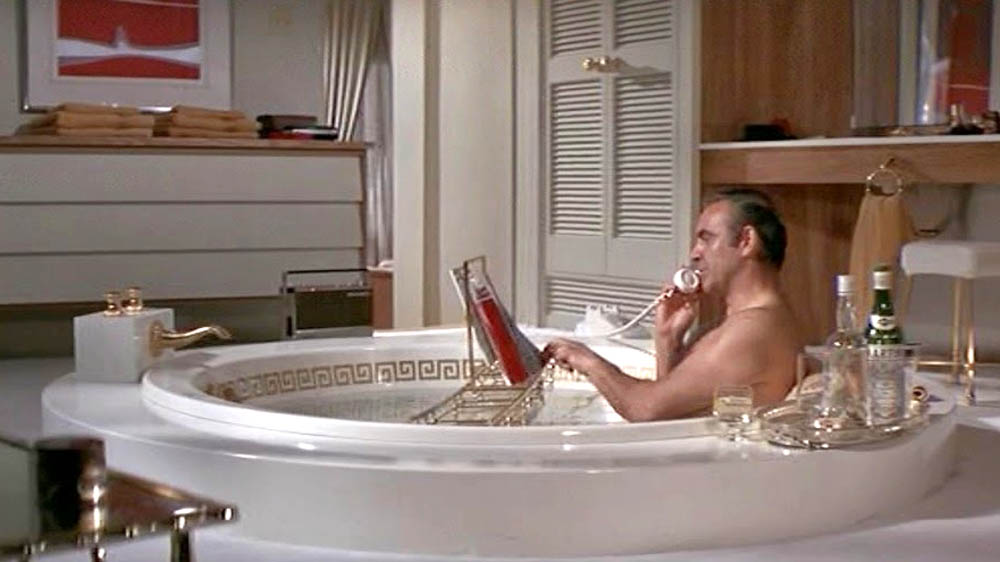 Jimmy Dean plays a millionaire entrepreneur based on the reclusive Howard Hughes. Willard Whyte is a rather passive character who is mostly kidnapped and… that’s about it.

We’ve lost count of how many actors have played Felix Leiter – this time it’s Norman Burton who, like all the rest, performs admirably in a thankless role that is rarely more than to provide the occasional cavalry should Bond require it. There’s a botched attempt to stakeout a circus but that’s about all of note.

Meanwhile, Moneypenny gets to go in the field! She walks, she drives, she wears a little hat to disguise the fact that Lois Maxwell had dyed her hair. Bernard Lee’s M has by now perfected his eye-rolling capabilities when it comes to Bond’s shenanigans and Q does the usual, demonstrating machines that cheat at slots and a variety of voice-altering gadgets which prove rather useful throughout the film.

Somewhat like Felix Leiter, it proved inexplicably hard to keep one actor on as Blofeld, although this time it somewhat plays into the plot that he’s been having extensive plastic surgery, along with various trusted minions, to create an army (of three) doubles for a security reasons.

One is killed off pretty promptly at the start, drowned in a boiling mud bath, which sums up the film’s tone of slapstick sadism. Adding to the confusion, however, is that the actor chosen this time round is Charles Gray, last seen as short-lived Tokyo ally Mr Henderson in You Only Live Twice.

Goldfinger’s Pussy Galore may have been a coded lesbian (before being ‘turned’ by Bond; the less said on that the better) but in Mr. Wint and Mr. Kidd (played by Bruce Glove and Putter Smith respectively) we have the first openly gay characters, and a couple no less.

These assassins are specialists in disarming their prey with their idiosyncratic small talk, carefully chosen word play and general, all-round kookiness. That they don’t live to have (at least) one more attempt on Bond’s life is a crying shame.

Peter Franks is a minor diamond smuggler notable only for giving us one of the best Bond fight scenes ever. Trapped together in a glass lift the two just go for it in a sequence that rivals Bond v Red in the train car in From Russia with Love. It’s visceral and arguably makes this film completely essential viewing.

Jill St. John gives us one of the feistiest Bond girls in the canon – Tiffany Case is only out for herself and mostly just content for Bond to do the heavy lifting for her. Yes, when she tries to help it mostly backfires but generally she’s an asset. A diamond smuggler by trade who has a penchant for needlessly switching wigs and a handy fingerprint testing set up in the bedroom, this girl is not to be messed with.

The opposite of Tiffany in almost every way, Lana Wood’s poor Plenty O’Toole is really only there as a brief distraction with a punchline for a name. Whilst it’s fun to see her survive being rather cruelly thrown out of a window into a swimming pool, her ultimate and rather brutal demise is really quite sad. 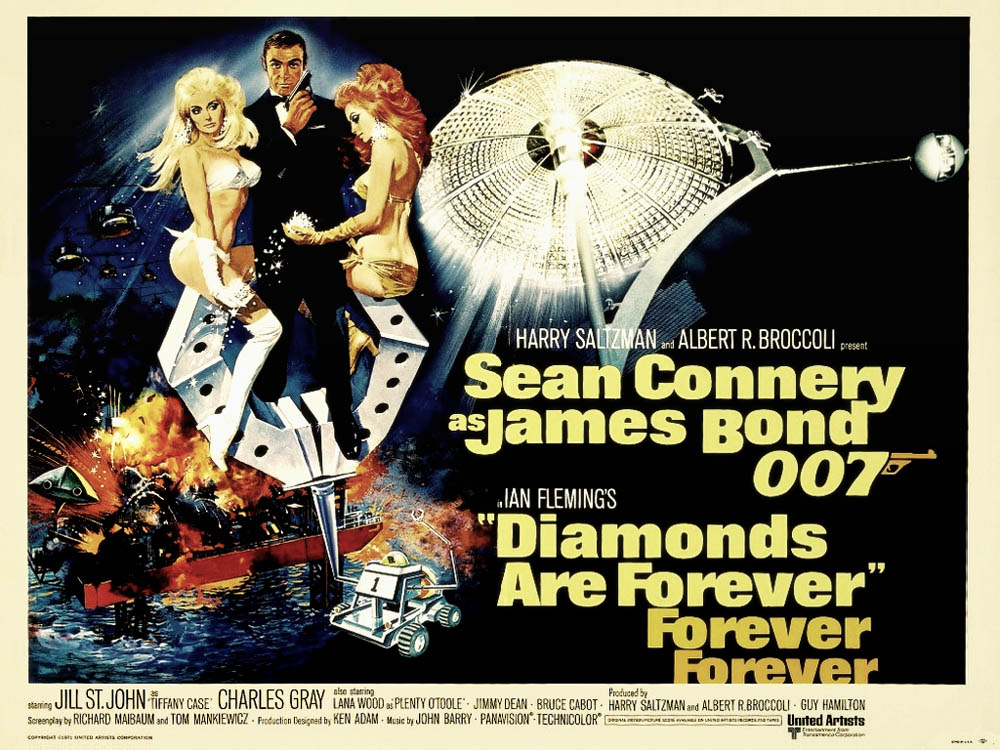 Bambi and Thumper – two gymnastic bodyguards ‘protecting’ the kidnapped Willard Whyte, played by the uncredited Lola Larson and Trina Parks – give Bond a run for his money until he’s somehow able to semi-drown them both with one hand each. A shameful and rather misogynistic end to what had the potential to be a truly epic brawl.

And by that we mean mostly the lack of it. There’s a cringeworthy explanation of the diamond trade at the beginning, presumably designed to let the audience know just how crucial it is to world safety that nothing interrupts it, but is really just a group of rich old white men complaining that profits are being affected. Oh and, you know, A LASER IN SPACE.

You know the bit. Bond drives into an alley, pulls a two-wheeler to get through a tiny gap and comes out the other side on the other two wheels. When first performed there were too many people in shot, supposedly ruining the take, and every subsequent attempt to reshoot had one error or another. In the end the best take was filmed on the wrong two wheels so they put it in a 100% impossible flip and hoped everyone would just go with it. Which we did.

Why. Just why. This never happened to the other fellow.

So much right and so much wrong. The best ‘best bit’ is obviously the elephant playing the slot machines. The worst is undoubtedly the black woman in a cage turning into a gorilla.

Bond wanders on to a film set making some sort of moon film (somewhere within the compound that houses all the stockpiled diamonds and testing facilities), steals a moon buggy and proceeds to have a bizarre car chase out in the desert. Fortunately, despite picking the slowest-moving vehicle in the entire franchise for his high-speed getaway, he wins purely because none of the other drivers can steer to save their lives.

Mr Wint and Mr Kidd sure know how to pun whilst killing. If only they were slightly less obsessed with their perfume maybe Bond wouldn’t have so quickly smelt a rat.

Connery was paid $1.25 million to reprise the role – an unheard of figure at the time.

The moon-landing movie set was in reference to the conspiracy theory that the famous footage had been faked.

At one point the plot saw the return of Gert Frobe as Goldfinger’s twin brother, intent on revenge.

The boiling mud was mashed potatoes, which after 24 hours unrefrigerated and under hot lights, unsurprisingly gave off an unbearable smell.

John Gavin was cast as James Bond before Connery agreed to return. The producers insisted he be paid his full fee in recompense for losing the role. 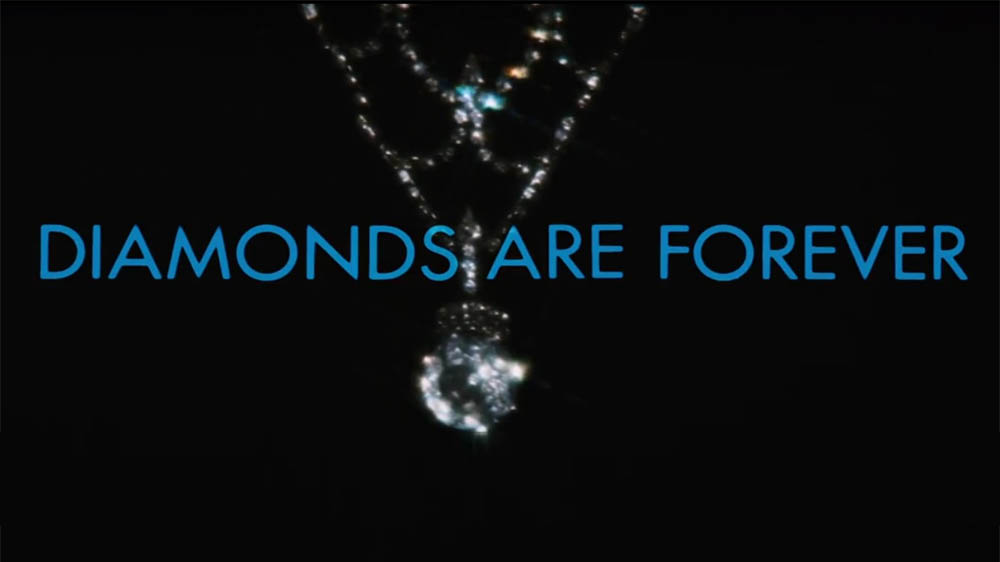 Shirley Bassey makes her second appearance on the Bond soundtrack, but not her last. To date she is the only repeat performer of a Bond song.

Lana Wood had to stand on a box for many scenes with Connery due to their extreme height difference.

There is a jewellers in Bank, London, named after Mr Wint and Mr Kidd.

Sammy Davis Jr filmed a cameo in one of the many casino scenes playing at a roulette table, but it was cut. Bond getting tips and strategies for roulette from the Rat Pack? That we’d pay to see.

When filming the scene in which Plenty O’Toole is found drowned in the pool, Lana Wood nearly died for real as the concrete block slowly shifted down the sloping floor.

All-in-all, it’s pretty bonkers. And that’s ultimately why it works. We all love the post-Bourne era Bond because it’s visceral and ‘real’ – but there’s something to be said for those occasions when Bond just decides to go all out and have fun.

Moonraker, Octopussy, even Die Another Day – they’re hard to love unless you give in and let them be what they are. Diamonds are Forever was the first to try this tactic and was pretty successful. Everything we want is still there – a great girl, ridiculous gadgets, bruising fight scenes – but there’s also the energy from everybody, hopefully, having fun. Maybe in this case Diamonds are actually Bond’s best friend?

James Bond will return in Live and Let Die.

What do you think of Diamonds are Forever? Let us know below…