Sean Connery left the building and George Lazenby picked up the reins in a film whose reputation seems to rise and fall depending on the phases of the moon.

We start with the apparent attempted suicide of Tracy di Vicenzo, daughter of Draco, the leader of what is essentially a ‘good’ version of SPECTRE.

Bond saves her life, is paid off to woo her, falls in love and then gets side-tracked by Blofeld’s Angels of Death. These twelve women are in the Swiss Alps, being subliminally trained to spread Virus Omega and destroy the world’s agriculture.

Somewhat inevitably winter sports-based hijinks then ensue and Bond is reunited with Tracy. Rather less inevitably Bond gets married (for real) before a final burst of cruelty sees the love of his life gunned down mere minutes later.

George Lazenby had the unenviable task of being the first man to take over the role of James Bond in the official series.

Australian, relatively untested as an actor and stepping into the major role in a world-wide franchise can not have been an easy sell for the producers, but they felt that he embodied the look of Bond and when he accidentally punched his partner in the face during an audition fight scene they decided they could take the risk. 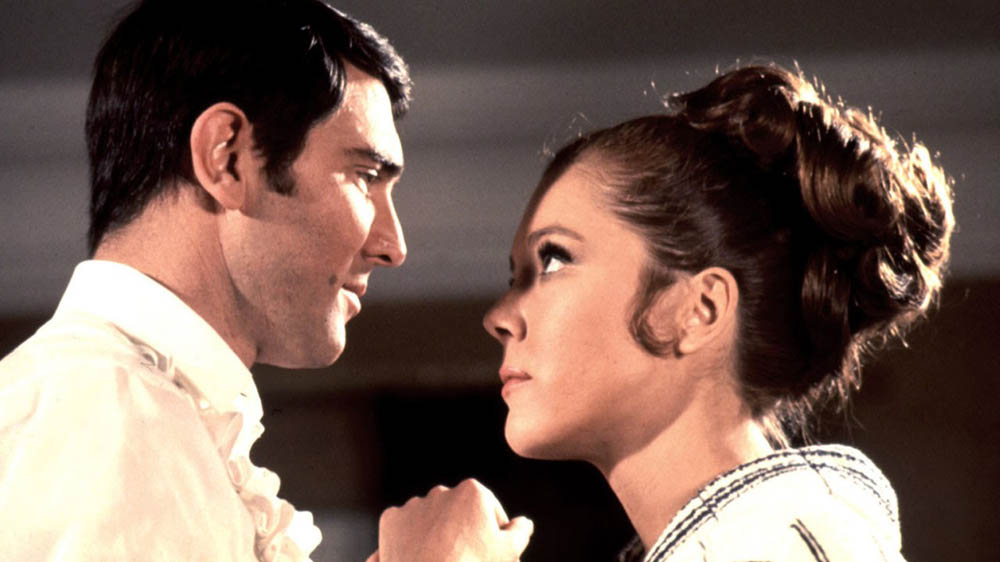 Gabriele Ferzetti plays a similar character to Kerim Bey, although without the official recognition. Draco seems to know a little bit about everything and everyone, this time as head of a crime syndicate.

Aside from essentially selling his daughter to Bond, he does appear to be a loving father, and since he never does anything ‘evil’ on screen it’s easy to forget who and what he really is. The film doesn’t dive too deep into his past so nor should we.

MI6’s big three are by now a) expected but b) pretty much comic relief. M is gruff and stern and rarely looks Bond in the eye, Moneypenny is crying at Bond’s wedding, and Q just wants Bond to stop larking about with his expensive toys.

Then there’s also poor Shaun Campbell, as played by Bernard Horsfall – the sacrificial lamb. He spends most of the film climbing a mountain only to get shot at the top, and it’s pretty unclear what he would have done had he arrived undetected.

Well, if Bond’s face is going to change, Blofeld’s may as well do too. Now played by Telly Savalas, this incarnation of Blofeld only wants to be (falsely) recognised as aristocracy and have his past crimes absolved, for which his extremely convoluted plan involves hypnotising allergy sufferers into unknowingly destroying the world’s crops. There was probably a simpler way to go about all this, but we’ll never know for sure. 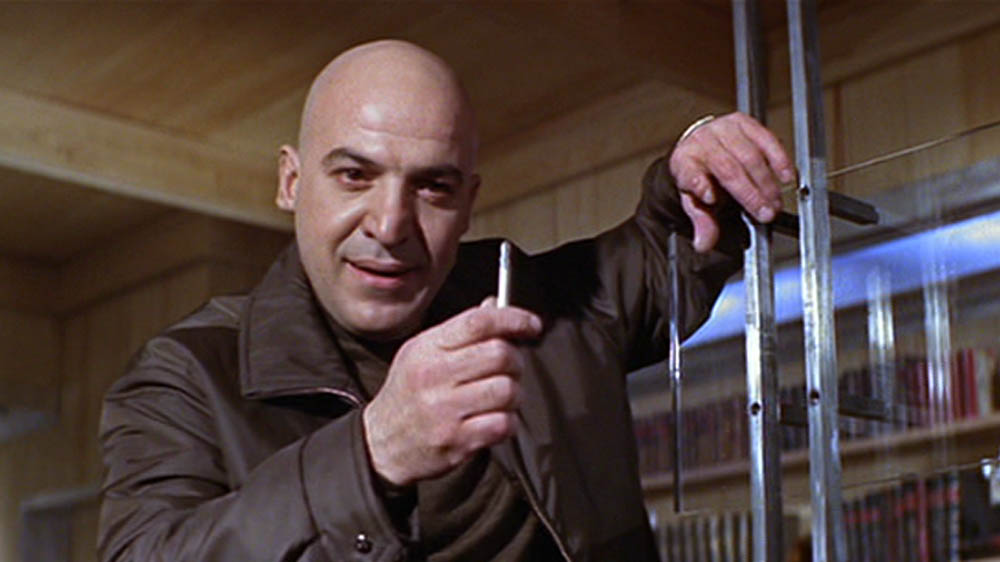 Cast from the same mould as Rosa Klebb, Irma Bunt (as played by Ilsa Steppat) is Blofeld’s second in command. She’s utterly no nonsense and runs a very tight ship, albeit one with electronic locks on the doors that can be disarmed with naught but a nail file. It is she who wields the gun that delivers the fatal blow to Tracy and as such can be immortalised as Bond’s cruellest foe. Never seen again, she gets away with it too.

Like Honor Blackman before her, Diana Rigg was famous before Bond for being on The Avengers. Rigg, however, was fortunately not saddled with a single entendre name and an attempted rape scene – this was 1969 and things had (somewhat) improved for our female leads.

Tracy is independent, forthright and more than handy in a fight or a car. She’s polite – briefly stealing Bond’s car at the beginning but only so she can drive it to her car and make the switch – and a feminist – she ain’t about the ‘obeying’ in those marriage vows. 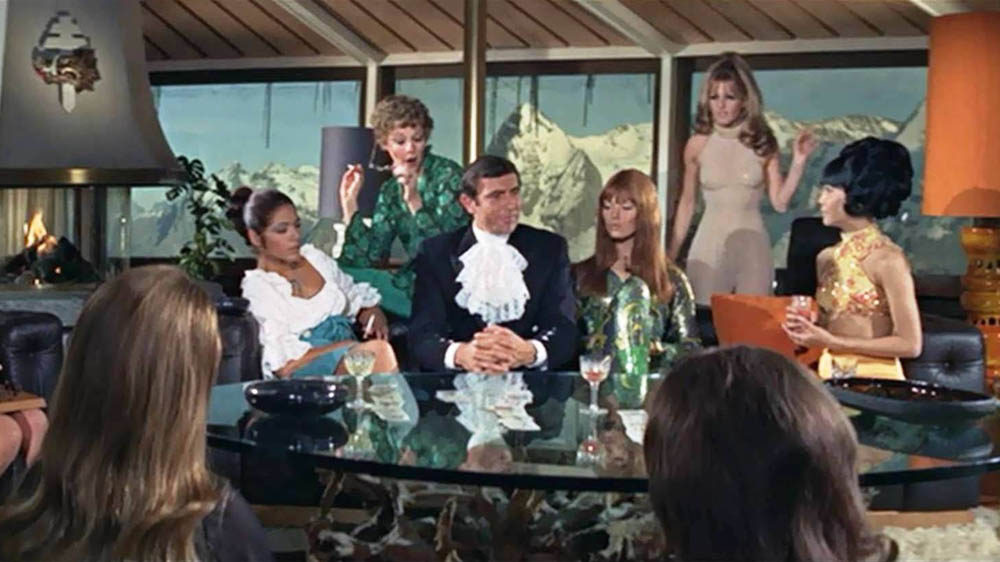 Meanwhile, there are Blofeld’s Angels of Death, twelve beautiful girls all being cured of their allergies and simultaneously hypnotised into being harbingers of doom.

Notably we have Catherina von Schell, the Hungarian girl who worked out the nail file trick, and Angela Scoular as Ruby, who mostly wants to know what’s under Bond’s kilt. And finally it’s worth mentioning Joanna Lumley – she doesn’t get to bed with Bond, but is the third (and not final) Bond connection to The Avengers.

So it’s not a hollowed out volcano, but the mountain-top lair is rather more desirable as a holiday destination, especially if you like winter sports. Speaking of which, Bond shows his usual proficiency at everything he does, skiing off piste with nary a care in the world, and largely on one ski, as well as picking up bobsledding like it’s riding a bike.

Bond really doesn’t fully realise just what a gem he has in Miss Moneypenny. When he’s pulled off the Blofeld case because he’s got nowhere with it in the two years since the events of You Only Live Twice he resigns in a fit of childish pique. Moneypenny saves the day by switching his letter for a leave request. Granted, naturally. 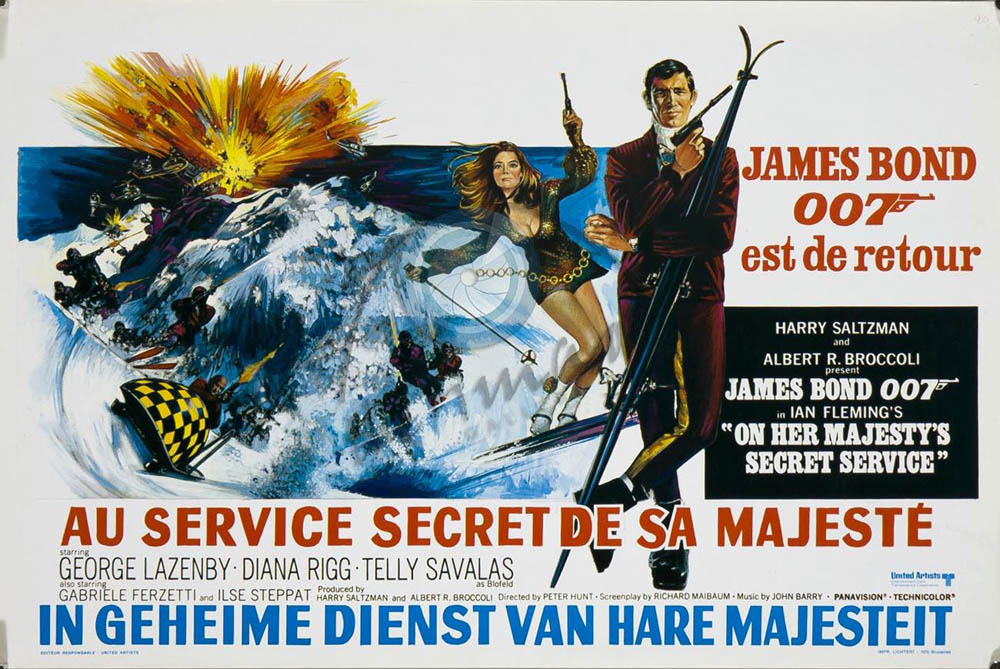 She really is up there as one of the best Bond girls ever. Rigg presents a rounded, likeable and believable character who can hold her own at everything she puts her hand to. It’s no wonder Bond falls for her, even if the start of their relationship is questionable. Irma Bunt really does have a lot to answer for.

They did not shrink from having their new Bond go for it in quite a few pretty gritty fight scenes. Those on the beach and in Tracy’s hotel stick out the most but really anytime Lazenby had to get physical he more than acquitted himself. It truly is a shame he turned down the chance to return.

The third (and so far final) film to have an instrumental Bond ‘song’. However, it does famously feature a montage set to Louis Armstong’s ‘We Have All the Time in the World’, which was also the last thing he ever recorded.

Lazenby remains the youngest actor to portray Bond to date – he was 29 at the start of filming.

During the opening sequence Lazenby says ‘ This never happened to the other fella’, an intentional reference to taking over the role from Sean Connery, kicking off nonsense theories about ‘James Bond’ just being a codename that still continue to this day. Aside from the fact that fighting over a girl happened to Connery’s Bond all the time, this is then negated by the scene where he opens his desk to look at mementos from previous films, which he wouldn’t have if Connery’s Bond was literally an ‘other fella’.

The first Bond film in which we see Bond crying. 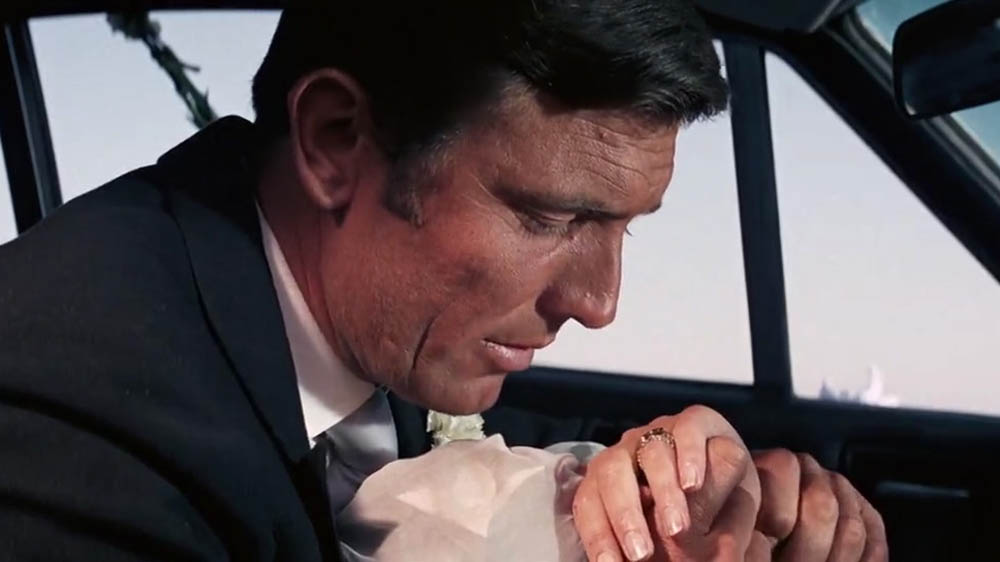 Whilst cracking the safe Bond reads a copy of Playboy – this is a reference to the original On Her Majesty’s Secret Service novel being serialised in the magazine.

When Bond is researching his own coat of arms the Latin motto that he is given – Orbis non sufficit – translates as The World is not Enough.

The first sighting of M’s home.

Joanna Lumley had a relatively small part, but spent two months on the production. She dubbed a variety of the other Angels of Death and taught many of them how to crochet in order to pass the time.

Lazenby was considered for Never Say Never Again before Connery took the role.

Draco’s girl, Olympe, was played by Virginia North but dubbed by Nikki van der Zyl, making this her sixth dubbing appearance in a Bond film.

Tracy was originally to have survived and her death occur at the start of Diamonds are Forever, but this had to be scrapped once it was clear that Lazenby would not be returning.

Plot-wise, On Her Majesty’s Secret Service is a tad convoluted but when has that ever stopped our enjoyment of a Bond film?

Lazenby is more than adequate as Bond, is up against our favourite recurring villain and is paired with probably the best Bond girl of all time. Peter Hunt directed the film with a sure hand, giving us one of the smoothest rides so far and compared to the fumble that was Thunderball, there really is very little to complain about.

It will always be somewhat of the black sheep because of Lazenby’s one-time appearance and the fact it’s the only film (until 2006’s Casino Royale) where Bond appears to genuinely fall in love, but there is far more to like than there is to hate here.

James Bond will return in Diamonds are Forever.

What do you think of On Her Majesty’s Secret Service? Let us know below…