There’s no way to hide from the fact that Moonraker is properly bonkers.

From concept to execution, the decisions that must have been made are largely inexplicable, and yet, somehow, it all just about pulls together. In essence, it’s pretty much the Greatest Hits of James Bond. In space.

It’s genuinely hard to decipher precisely what’s going on in this one. A space shuttle is hijacked, Bond goes to investigate and then spends pretty much the entire film avoiding assassination attempts before going into space to stop a madman from using nerve gas to kill everyone on Earth.

Roger Moore gets to play James Bond at his least Bond-like, and most Moore-like, so far – he’s still suave and likes martinis but his fighting technique has become a distinct version of avoidance until the hoodlum comes a cropper and he’s bordering on respectful to women. It’s rather disconcerting at first but is played so well that it soon becomes extremely enjoyable. 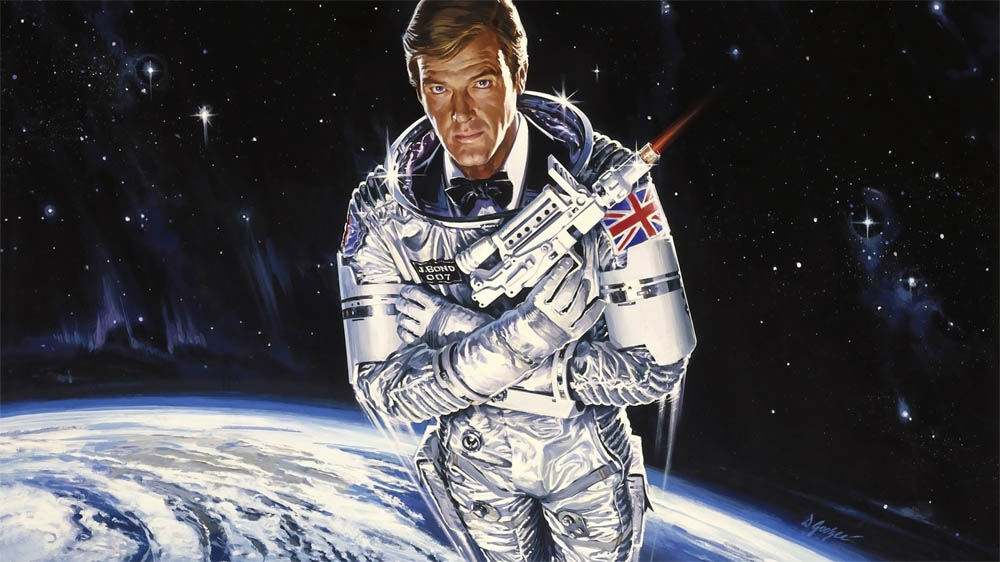 It’s almost like the MI6 crew only show up now so that we can see another fabulously appointed office deep within some form of cultural monument, in this case somewhere in Brazil.

It’s all worth it though for the explosive bolas demonstration which is so fun that it’s rather a pity Bond doesn’t get to use them elsewhere. It should also be noted that Moonraker features Bernard Lee’s final performance as M – sadly he died before filming of the next film, For Your Eyes Only.

There’s no point in wondering about his villainous motivation – killing everyone ‘just because’ is pretty standard these days – but we can at least marvel at Michael Lonsdale’s achievement in making us believe in the insanity. In classic Bond villain style he knows what’s up with Bond from the start and decides to have fun by planning amusing deaths for him. None of which come to pass, of course. 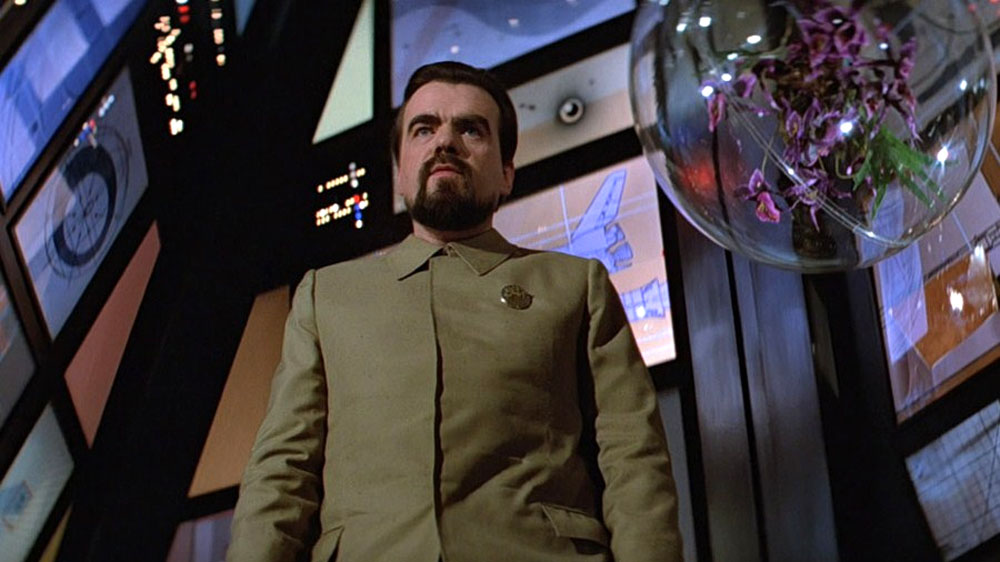 Richard Kiel makes a return appearance as Jaws, the unstoppable, metal-mouthed foe from The Spy Who Loved Me. Or at least that’s what you’d expect, but instead we get Jaws the loveable rogue who makes relatively half-hearted attempts to kill people and also thinks if he flaps his arms in freefall from a plane, he might fly. This version of Jaws also falls in love with the diminutive Dolly (Blanche Ravalec), who’s also ‘comically’ mute. It’s OK though because once Bond points out they’re not perfect physical specimens and Drax won’t allow them to live on the space station, they switch sides and save the day.

As played by Toshirô Suga, Chang is Drax’s chief assassin / bodyguard / sidekick who first tries to kill Bond via the magic of G-Force and then goes the more traditional route of a sword fight in a Venetian glass museum, before ending up dead in a grand piano.

The competition for most ludicrously named Bond girl is notoriously fierce, and Dr Holly Goodhead is a strong contender for the crown. Fortunately, as played by Lois Chiles, she is a very capable CIA double agent who may or may not be an astronaut and by the end of the film is perfectly happy to have zero gravity sex with Bond. ‘I think he’s attempting re-entry, Sir.’

Another capable woman, this time a helicopter pilot for the Drax Corporation, Corrine Cléry has the lesser role of ‘bad girl who only might be good and therefore obviously comes a cropper’. In one of the more distressing death scenes ever to grace a Bond film a vicious Doberman attack squad chase her through the woods and fatally maul her, thankfully just off camera.

At times it feels like Moonraker was just trying to outdo itself at every turn. What do people do in Venice? They take gondalas. What shall Bond do in Venice? He’ll take a gondala too! Except he’ll also avoid assassination from a knife-throwing corpse and then reveal that his gondola is sort of the reverse Lotus Esprit from The Spy Who Loved Me and it’ll have a hovercraft switch so he can come off the canals and drive through St Mark’s square on a contraption that mostly looks like a moving table. And the pigeons will love it. 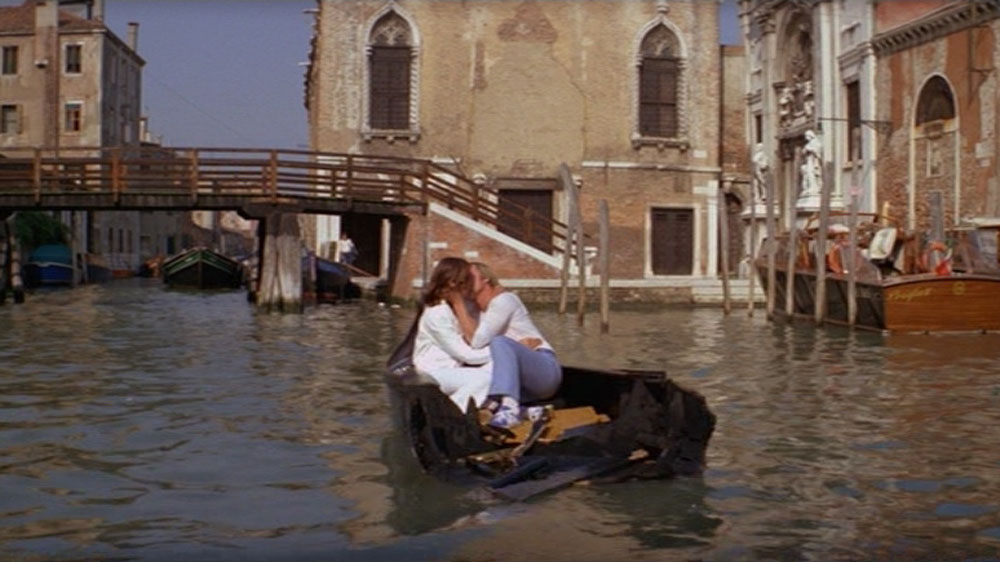 Because one vehicle that changed just wasn’t enough this time round. When Bond is in his boat, racing down the Amazon and heading for a waterfall o’ doom, we needn’t worry because obviously the roof will detach into a paraglider.

The pre-credits sequence features a fantastic line from a seduced airhostess as Bond’s fingers creep ever further up her thigh – ‘Any higher Mr Bond and my ears will pop’ – but also a sort of TARDIS-like plane with ever more in the way of hidden enemies, including the notoriously petite and easily hidden Jaws. Quite why he ends in a circus tent is anyone’s guess, but the sequence boasts arguably the greatest stuntwork in the franchise to date.

Much like the underwater battles in Thunderball, there’s only so long you can put up with laser fights in space. They’re a touch speedier (and with more amusing sound effects) so don’t feel quite so endless, but it’s touch and go for while. They just don’t appear to do enough damage to feel in any way real. But on the other hand, lasers!

When in Rio, have some carnival. And also let Jaws wear a terrifying giant clown mask and walk reeeeeeally slowly down an alleyway towards tertiary Bond girl Manuela (Emily Bolton) who doesn’t do an awful lot except almost get her throat bitten out. Fortunately drunken revellers and Bond flapping around him like a mosquito Jaws prove too much of a distraction for Jaws. Which is fortunate not just for the hapless Manuela but also the viewer, because that mask is the stuff of nightmares.

The freefall sequence required a total of 88 jumps and five weeks to film two minutes of action due to the limited amount of filmable freefall time before parachutes would need to be opened.

The cable that Jaws bites through in the cable car sequence was made from liquorice.

The Spy Who Loved Me promised the return of Bond in For Your Eyes Only, but the success of Star Wars prompted the producers to craft a space-set story.

There’s no casino trip in Moonraker (perhaps he just played slots online with a gadget from Q) and Bond only fires one gun in the film – when he shoots the assassin out of the tree with Drax’s hunting rifle. This is the only Bond film so far where his signature Walther gun is not seen.

Shirley Bassey’s third (and so far final) Bond theme, after stellar turns for Goldfinger and Diamonds are Forever. She’s also sung rejected themes for Thunderball and Quantum of Solace.

Jaws was initially going to be a proper villain in Moonraker until producers realised how much fan mail Richard Kiel was getting asking why Jaws couldn’t be a goodie.

Barbara Bach was going to make a cameo as Anya from The Spy Who Loved Me but the scene was ultimately scrapped.

Frank Sinatra was offered both the chance to record the theme song and star as Hugo Drax.

It’s utter nonsense of course, but also unadulterated fun. With no original ideas and a ‘greatest hits’ mentality it’s also a perfect Bond introduction. Let the madness wash over you, put your feet up and enjoy the ride.

James Bond will return in For Your Eyes Only.

What’s your favourite moment in Moonraker? Let us know below…