After the sheer bonkers excess of Moonraker there really was only one thing for Bond to do – go back to Earth.

So we have a Moore-era Bond that could just about have starred Connery in the ’60s, and it’s all the better for it.

Quite simple really: there’s a missing missile command system and a young woman seeking to avenge the death of her parents. To spice things up there’s also a whole melange of winter sports hijinx. And a parrot.

Roger Moore is five films deep now and can do this with his eyes shut, but still manages to inject his trademark charm and wit into the role, even when the story has a more serious bent. For Your Eyes Only is however arguably the turning point for Moore, when he just about tips over into maybe, whisper it, too old to play James Bond. 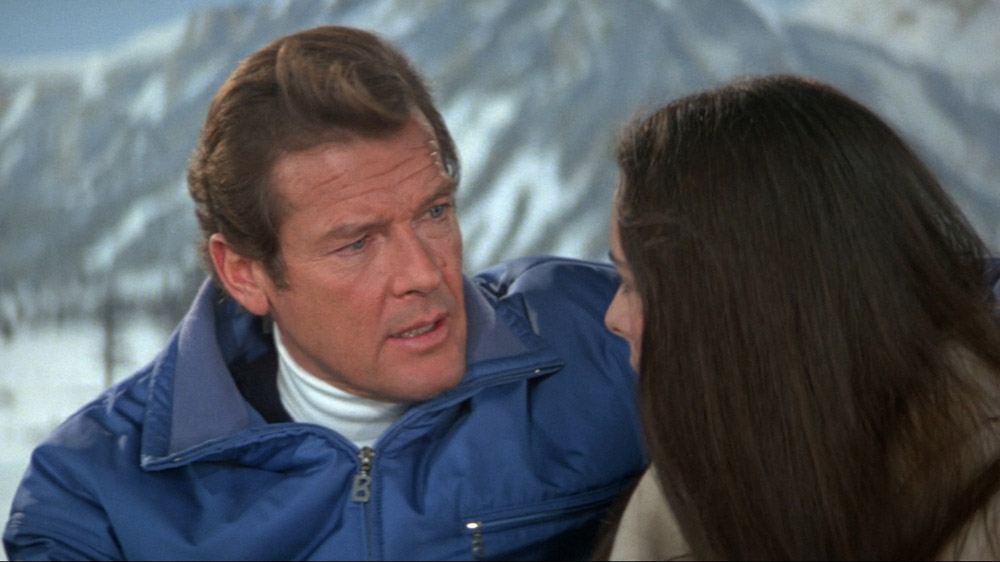 There’s no M this time round – he’s mentioned but not seen – due to the death of Bernard Maxwell during production. Q gets a beefed up role to compensate and Moneypenny gets a makeup stand in her filing cabinet.

As established and several occasions, if Bond’s abroad he needs a fixer. This time around it’s Topol’s turn to provide weapons and weapon-wielders to our favourite British Agent abroad and help him find the best casino. Milos Columbo is a former smuggler with a penchant for pistachios because if you don’t have a harmless quirk what are you even doing as a Bond character?

Julian Glover gets to play that other classic Bond-trope – the ally/enemy with a questionable past and, as it transpires, a questionable present. Kristatos is another smuggler (who formerly worked with Columbo) seeking to expand his operations and change his fortunes by selling the missing missile defence system to the KGB. Suavely evil, obviously.

Emile Locque, or the Dove, as played by Michael Gothard, is a vicious assassin who actually lives up to the adjective. He kills here, he kills there, he runs down Countess Lisl with a team on dune buggies and he’s deservedly trapped in a car that falls off a cliff. Consider those wings clipped, Dove. 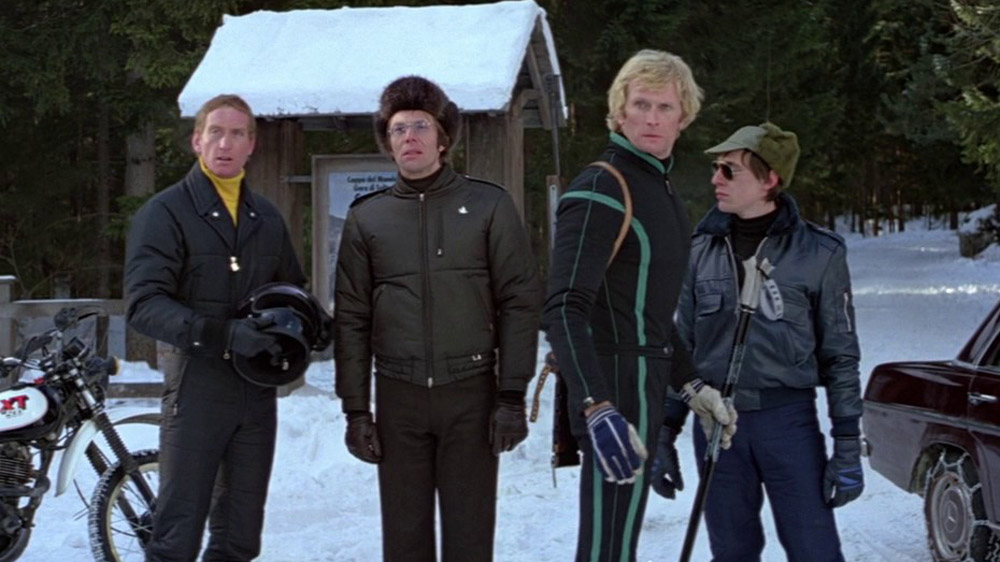 John Wyman plays yet another of our favourite recurring character-types – the Ayran superhuman who regularly nearly bests Bond. Erich Kriegler is an Olympic class winter sports specialist who is mostly either incredibly grumpy with poor Bibi or leading Bond on a merry dance through, variously, ski jumping, bobsledding, skiing and anything else that’s to hand and on the snow.

Fittingly, given the several references to Tracy Di Vicenzo, Melina Havelock is one of the capable Bond girls that we’ve come to know and love. Her favoured weapon is the bow and arrow, with which she’s very handy, and she’s on a personal revenge mission that Bond keeps interrupting. To be honest he’s lucky she doesn’t just get rid of him to keep him out of her way. 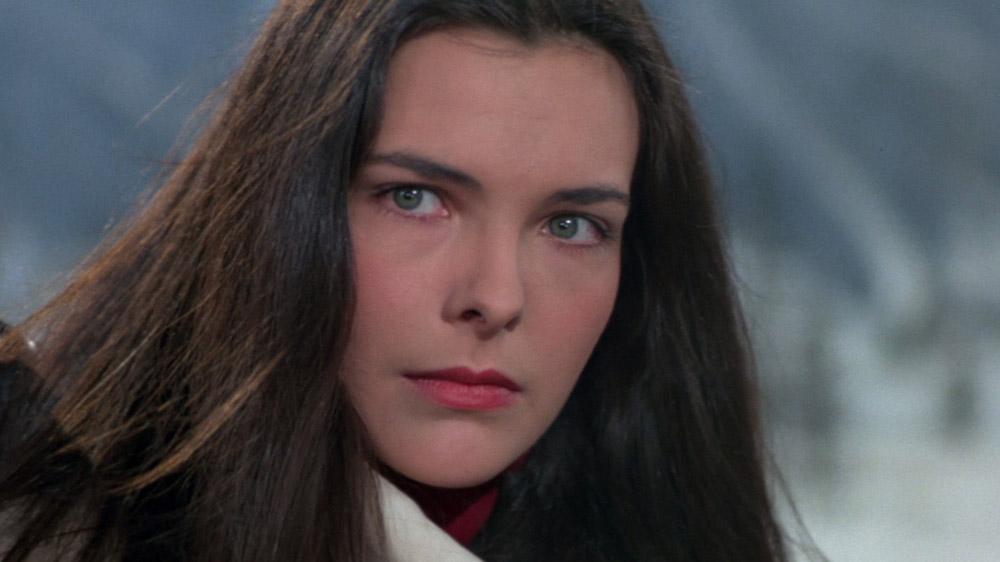 Does Bibi Dahl count as a Bond girl if she never sleeps with Bond? Her presence in the film is an odd subplot that never really goes anywhere: she’s an ice-skating prodigy (played by the actual ice-skater Lynn-Holly Johnson) who just follows her patron Kristatos around the world and is deemed by Bond (and Moore) as too young for seduction.

The opposite of Bibi, i.e. pretty much the right age for Bond and worthy of the title of Bond Woman, Countess Lisl swans around restaurants and is run down by dune buggies on the beach. It’s a sorry end for a character who deserved more.

For legal reasons this is definitely not Blofeld in the pre-credits sequence, it just really, really, really looks like him. In some ways it’s a sad ‘end’ to the character since as overly complicated ways to kill Bond go, this takes the biscuit. Not only does he every opportunity to just shoot Bond, Bond has every opportunity to just jump off the helicopter. Of course that would be far less thrilling (and satisfying) than scooping up the wheelchair-bound super villain and dumping him down an industrial chimney.

Bond’s Lotus is unceremoniously blown up so he and Melina have no choice but to use her yellow Citroën 2CV in one of the best/worst Bond car chases on film. It fits perfectly with the slopes, hairpin turns and olive trees and just goes to show that the right choreography can turn any car into a chase-worthy vehicle.

We get skiing. We get ski-jumping. We get motorbikes with spiked wheels that have no regard for slope etiquette and turn up on just about every part of the mountain. We get bob sledding, ice hockey with people (Bond scores a hattrick) and generally no regard for safety. Perfect James Bond Can Do Anything™ material.

And then of course Bibi goes trampolining – ostensibly as training for her ice-skating – but let’s be honest, because the producers wanted a lithe girl in a leotard to jump up and down a lot.

First official Bond film without the character of M, although he also doesn’t appear in the 1954 TV movie of Casino Royale.

Bibi is considered too young by Bond (supposedly 16 years old) and Melina fair game, but Lynn-Holly Johnson and Carole Bouquet are only a year apart in age.

Sheena Easton is the first artist behind a Bond song to appear in the credit sequence.

At the time of filming Cassandra Harris was married to Pierce Brosnan.

Carole Bouquet couldn’t dive due to a sinus condition so all her underwater sequences were faked.

Jaws was almost brought back for a third time but it was decided he didn’t suit the more serious tone.

Third and final appearance of the guy who does a double-take and looks at his drink whenever he sees Bond do something unusual. Is it just us that thinks he should’ve popped up as a 50th anniversary nod in Skyfall when Bond jumps on the tube train?

Many have argued it’s just a rehash of On Her Majesty’s Secret Service, a claim it’s hard to refute, but who really cares? James Bond is always going to do pretty much the same thing and whilst it doesn’t do anything new, what it does it does very well.

In fact the more serious tone means it might even stand up better than the many of the more obviously ‘fun’ entries in the series. 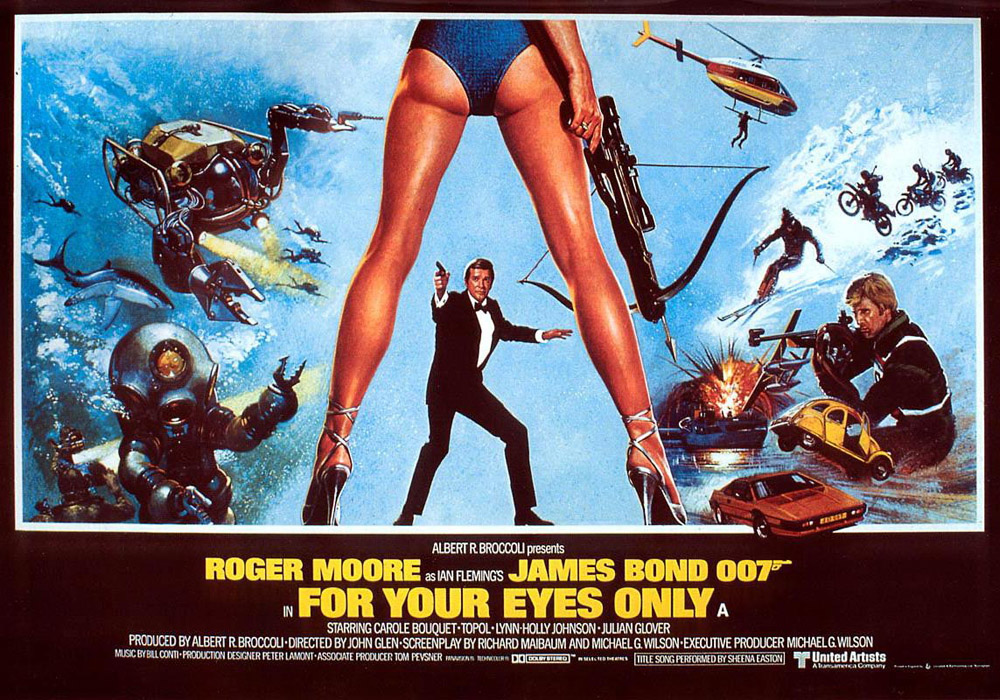 James Bond will return in Octopussy.

What’s your favourite moment in For Your Eyes Only? Let us know below…