Serving as a quasi-reboot in 2006, this 21st entry in the franchise presents James Bond as a reaction to the glitzy excess of 2002’s Die Another Day and the gritty success of Jason Bourne, and it arguably couldn’t have been more successful.

James Bond is pitted in a battle of wits, and fists, against Le Chiffre – a suave, urbane money launderer who cries bloody tears from one eye and fancies himself a poker wizard.

There’s a whole big thing about short-selling stocks, an attempt to blow up a plane (and possibly Richard Branson) and at least two lessons about visible earpieces on supposedly secret agents, but really this film is about James Bond falling in love for the first time since On Her Majesty’s Secret Service and the audience falling in love with James Bond for the first time since GoldenEye. Note: Martin Campbell directed both.

When Daniel Craig was announced as the sixth 007, the media found it oddly hard to get past his blond hair, as if this was some sort of disability when it came to playing everyone’s favourite misogynistic dinosaur. Oh boy were they proved wrong.

He’s rugged and brutish and gets his hands dirty in a way that no Bond has since Sean Connery. But it’s forty-odd years later and this time we get Bond emerging from the water (in a nod to Honey Ryder’s entrance in Dr. No), dripping wet and sporting powder blue trunks.

He even falls genuinely in love with the intelligent, mysterious and ultimately doomed Vesper Lynd. Very much the 21st Century Bond.

We may have a new James Bond but we have at least one familiar face. Judi Dench continues her class-act as Bond’s ‘mother figure’ – M doesn’t trust him, she doesn’t like his methods and yet she can’t quite bring herself to bring him to a halt. We also learn that M is perhaps not a random letter after all… 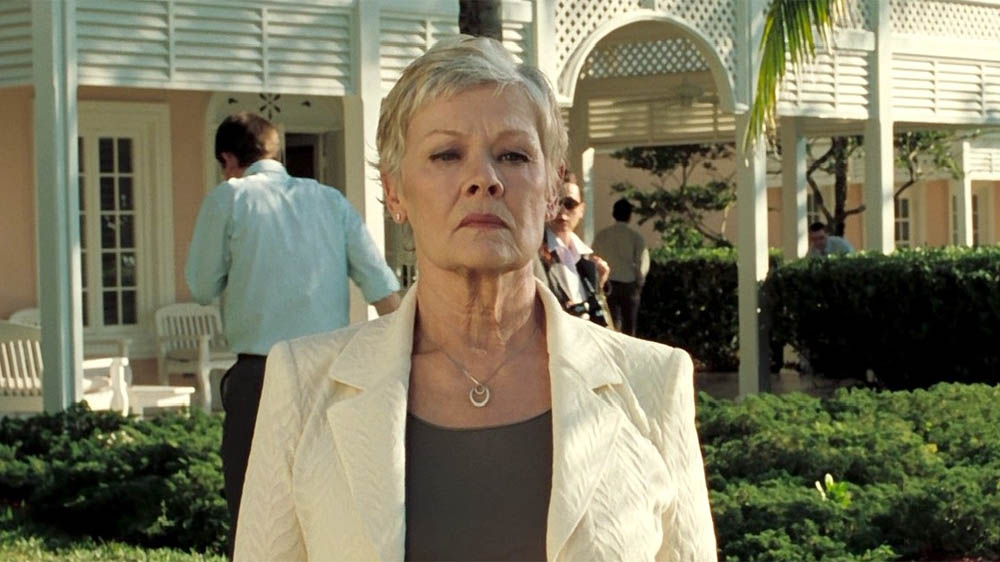 Jeffrey Wright joins Craig’s Bond as the seventh (or, arguably, eighth) incarnation of Felix Leiter (last seen in Licence to Kill), Bond’s sort-of equivalent over in the CIA.

He doesn’t have an awful lot to do this time around, but his lack of experience playing Poker (how exactly did he get into the game?) gives Bond a handy route back in once he loses all his money. It’s still too soon to tell if he’ll overtake David Hedison as our favourite Felix.

Mads Mikkelsen’s Le Chiffre cries bloody tears and twitches at inopportune moments due to an undisclosed accident robbing him of sight in one eye, but this hasn’t stopped him from becoming a world leader in playing villainous games with the stock market.

He’s a maths-whizz, he’s good with numbers and he even out-plays Bond (with a little help from an unknown toxin) in a game of poker before making an ill-timed all-in call on probably the luckiest hand Bond could ever have received. His predilection for wicker-chair-and-knotted-rope torture is lifted directly from 1953’s source novel and is evil enough to land him a coveted spot in the ‘Best Bond Villains’ ever hall of fame. 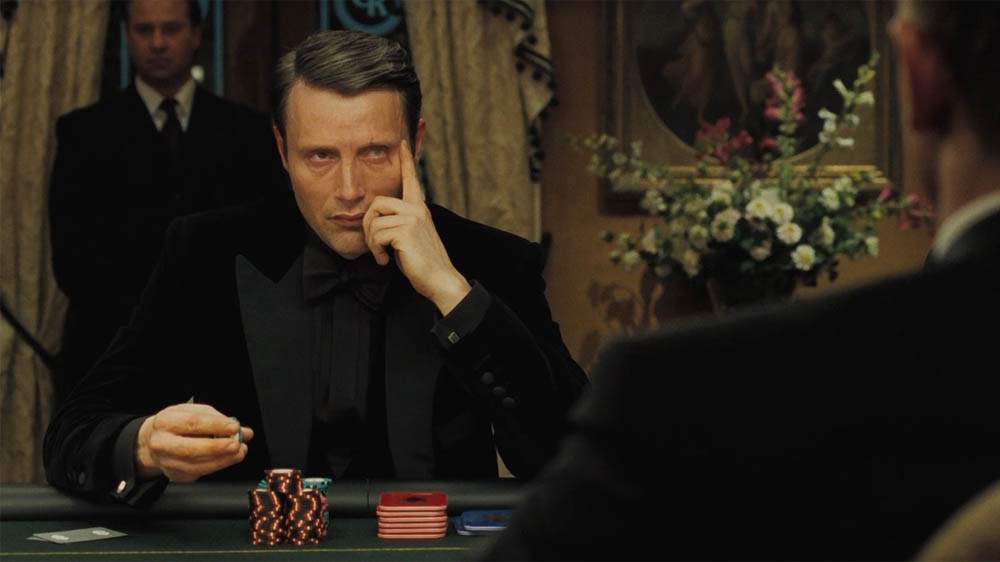 Is Giancarlo Giannini’s Rene Mathis good? Is he bad? You’ll have to tune in to 2008’s Quantum of Solace to really find out, but for now he’s firmly in the villain column. Suspected of selling Bond out to Le Chiffre (someone leaked that Bond knew his ‘tell’) he ends his time on screen being tasered and hauled away. He’s charming and cosmopolitan – the quintessential European gentleman of a certain age.

As Mollaka, Sebastien Foucan is the real-life practitioner of parkour who leads Bond on quite the merry ride at the beginning of the film. That foot chase (with bulldozer cameo) was the perfect antidote to Die Another Day’s incomprehensible ice-surfing (for want of a better description). High octane, gritty and, crucially, done for real.

Next we have Alex Dimitrios (Simon Abkarin), who makes a poor decision to bet his Aston Martin in a poker game with Bond, losing the game, the car, the girl and ultimately his life in a swift and tense knife fight.

Lastly there’s Carlos (Claudio Santamaria), who takes over bomb duties once Bond has killed Mollaka. His relentless pursuit of his goal and steely glint to his eye give him a certain T-1000 quality, and he meets a similarly fiery fate.

Not since Tracy di Vicenzo in 1969’s On Her Majesty’s Secret Service has a girl made such a mark. Torn between a boyfriend she thinks she can save and a lover she hopes she can spare, Vesper makes the ultimate sacrifice. 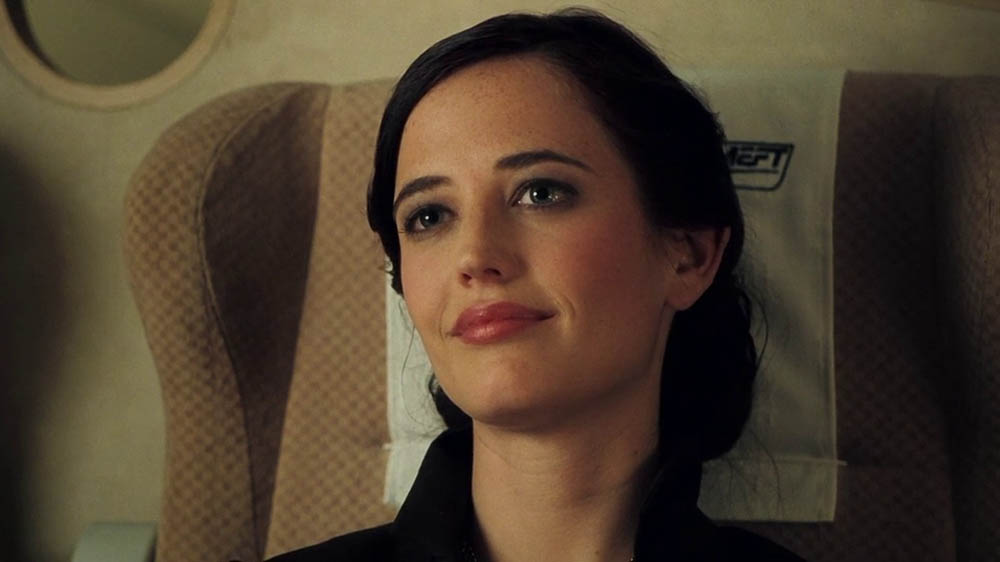 Caterina Murino is Solange, the gangster’s moll who – unusually, although not for wont of trying – does not sleep with Bond. She’s emotionally abused by Dimitrios and so immediately has our sympathies – none more so than when it’s revealed she’s been tortured and killed off-screen just for having contact with a man about whom she knows little more than his name.

Ivana Milicevic’s Valenka has a tendency to wear something yellow with cutouts and is either properly evil or so under the thumb of Le Chiffre that she’s still prepared to help poison Bond mere hours after nearly losing an arm in a machete attack. Either way we don’t get to know her well enough to properly judge – and she’s still out there somewhere.

We’re not the first to notice that Bond films tend to feature extreme sports ‘of the moment’ and in 2006 it was the turn of parkour. Except this time Bond isn’t an instant expert, literally barging through walls instead of sliding through tiny gaps.

With one extended chase Bond sets out his new and improved stall – this time everything we’ve always thought to be true about Bond is exactly that. And then some.

Three measures of Gordon’s, one of vodka, half a measure of Kina Lillet, shake it over ice and add a thin slice of lemon peel. Lifted directly from Ian Fleming’s original novel the cocktail is technically impossible as Kina Lillet hasn’t been produced in quite some time. Lillet Blanc, a similar product by the same company, is available if you want to try this at home.

Just when you think we’re going to get an epic car chase, Bond goes and rolls his car. Seven times.

To be fair this is primarily to avoid running over Vesper, tied up in the middle of the road, and for that he should be applauded. The stunt broke the world-record for ‘most barrel-rolls assisted by a cannon’, necessary because the aerodynamics of the Aston Martin DBS wouldn’t allow the car to roll sufficiently using just the traditional ramp.

Filming destroyed three Aston Martin DBS cars, valued at $300,000 each, in one day.

If the parkour chase was a good starter, the stairwell fight is truly the main course. Vicious and violent this sequence is on a par with Bond against Grant in the train car (From Russia with Love) and the elevator fight in Diamonds are Forever.

This is what it’s really like to fight for your life (in a Bond film, anyway). Even better, there are consequences. Vesper is so traumatised that she winds up fully clothed in the shower, leading to the first of many tender moments between her and Bond.

As far as every single man is concerned, the torture scene to end all torture scenes. You can keep your Marathon Man dentists – nothing will come close to the simple vindictiveness of cutting the seat out of a wicker chair and getting frisky with a knotted rope. 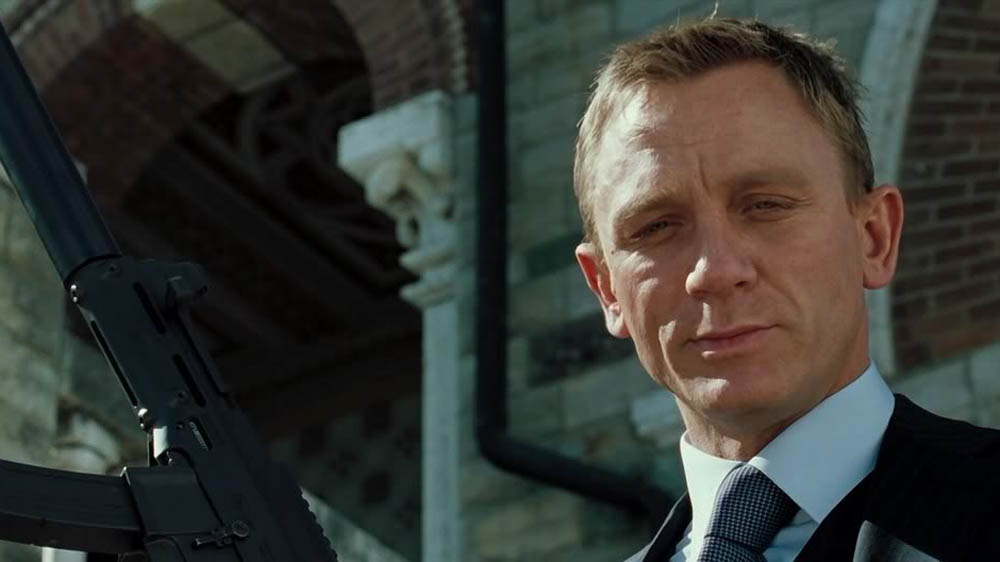 We have to wait to the final moments of the film for Craig to say the iconic ‘Bond, James Bond’ line and it is so worth the wait. The mysterious Mr White is at his mercy, the three-piece suit is impeccable and we get the line, the strings and the titles. What a way to end a film.

Daniel Craig was born in 1968, making Craig the first Bond who is younger than the series itself (Dr. No was released in 1962).

Craig’s Bond is a stickler for earpiece etiquette – admonishing fellow agents for touching their earpieces in both Casino Royale and Skyfall. It’s also his own (visible) earpiece which gives the game away to the mercenaries before the stairwell fight in Casino Royale. (He could’ve saved himself a lot of bother by just playing on a mobile casino back at MI6 headquarters, but the film probably wouldn’t have become quite so iconic!)

The suit at the end is a navy version of one worn by Sean Connery in Goldfinger.

The bodies in the real-life Body Worlds exhibit are (thankfully) the first corpses to be shown on screen in a James Bond film.

M’s sleeping husband is in fact played by the film’s transport co-ordinator.

A stunning and vital return to form.

Die Another Day was enormously successful, but lacked heart and Bond had arguably been overtaken by the upstart Bourne. The decision to go with a new and untested Bond was, at the time, considered risky but now looks to be a stroke of genius. 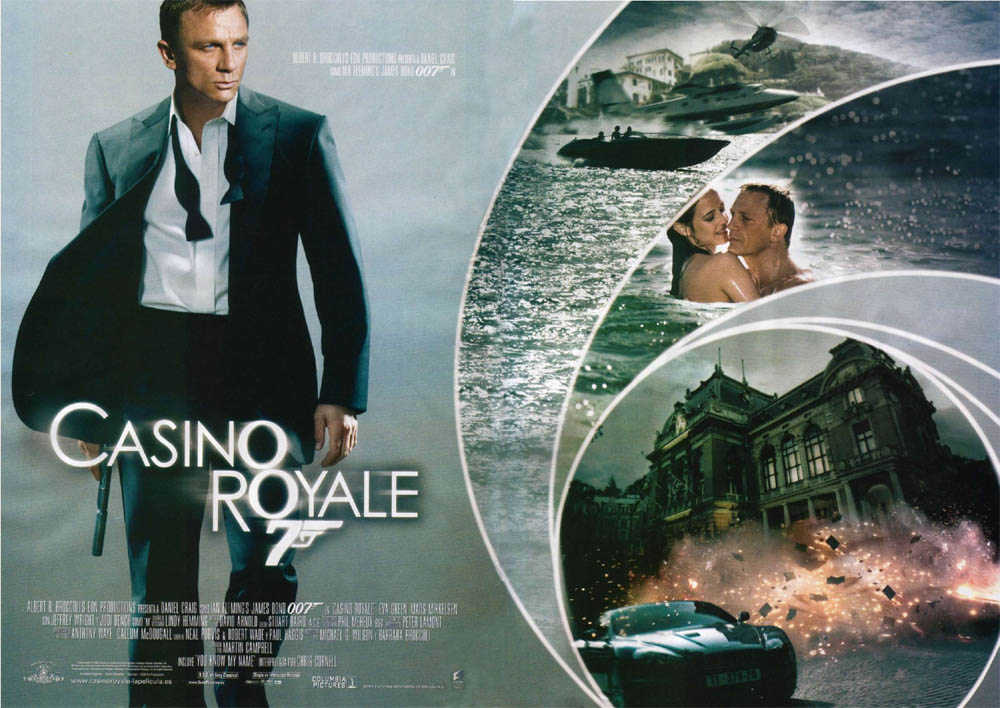 Everything feels refreshed – Bond is buff yet bruising, Vesper is intelligent, articulate and knows her own mind, Le Chiffre simply wants to make more money and even Chris Cornell’s theme song is somewhat of a departure from the more traditional Bassey ballads of yore.

Yes there are flaws (the 15 minutes pre-destruction in Venice are arguably a bit of a lull), but in many ways this reboot saved the franchise.

James Bond will return in Quantum of Solace.

What do you think of Casino Royale? Let us know below…