Marvel’s Avengers: Age of Ultron is the biggest movie of the summer.

It marks the culmination of Phase II of Marvel’s ambitious shared cinematic universe (even though the upcoming Ant Man is technically part of Phase II as well).

At last month’s London press conference to launch Age of Ultron, director Joss Whedon and his team of Avengers – Chris Hemsworth’s Thor aside – were on hand to talk about the movie. 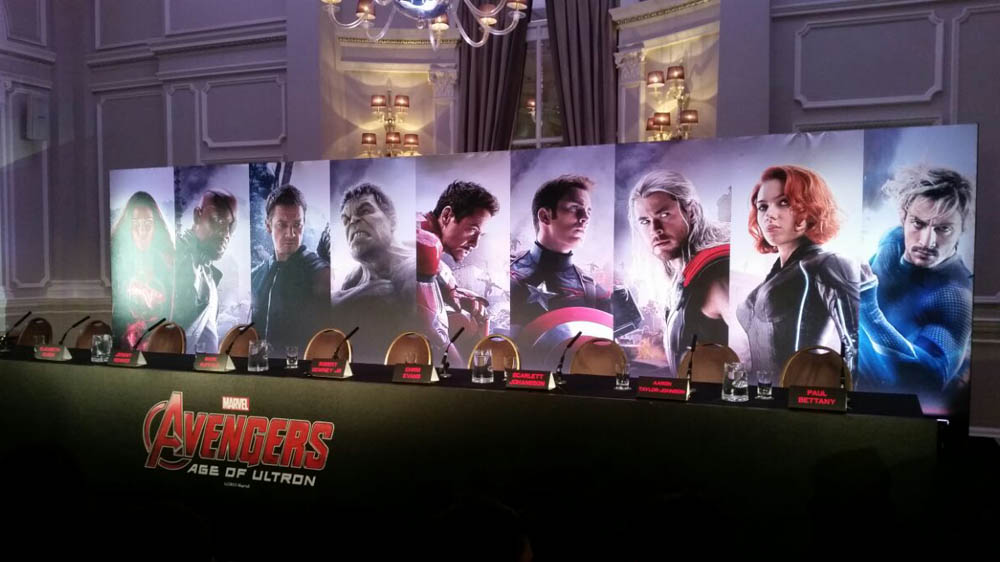 Better late than never, here are 12 things we learned…

Joss Whedon: “There are restrictions. But a lot of the questions have already been answered. It’s a bit of a comfort, actually.” And are there restrictions or pressures to make money? “If I had a key on my computer that said billion dollars I would press it. I just try to write it as well as I can, I don’t really think about those things.”

…and he’s looking forward to a well-earned rest.

Joss Whedon: “After my long rest I plan an even longer rest. I have no immediate plans for what’s next [for me] – which I think is the best thing I’ve ever said.”

His favourite thing about returning to the Avengers set? Robert Downey Jr: “Probably my first costume fitting, with me surrounded by many full-length mirrors.”

Case in point – later in the press-conference he forces a brief interlude. “I’m sorry – I’m sorry – it’s been 15 minutes since my last costume change, I’ll be right back”, at which point an aide provides a new jacket for Mr. Downey Jr. to change into before returning to his seat. “I’m sorry, next question.”

What gets Chris Evans excited about returning to the Avengers set? Chris Evans: “Marvel does a great job of bringing a lot of the same people together, not just in front of the camera, but behind the camera. So coming back together as a group, it feels like a family, a lot of familiar faces. It’s like a high school reunion or something.”

And what gets Elizabeth Olsen excited about returning to the Avengers set? “I get most excited by cooking and eating.” Err…

“I didn’t understand the question”, she later concedes with a laugh.

Everyone loves Hawkeye and The Hulk’s arcs… and Chris Evans is good at press conferences.

Who had the best arc in the movie? Robert Downey Jr: “Hawkeye’s got a heck of an arc this time. And I think I can say from us who have gone before, that Paul has a very interesting turn, and with Quicksilver and Scarlet Witch, too. I think Paul and Lizzie and Aaron came out and they exceeded expectations. Watching the film I was like ‘Wow, that’s the big triumph of the film’.”

Elizabeth Olsen: “The Scarlett/Ruffalo through-line I love. My favourite moment was the first time we see Black Widow talk down the Hulk. I just think that’s such a beautiful moment. I’ve seen that moment twice and it’s my favourite moment in the film.”

Chris Evans: “I like Scarlett and Ruffalo too. It was nice seeing the intimate moments between them, and this challenged relationship among a team of superheroes, where you don’t normally get romance, especially within the group.” *sits back, clicks fingers* “Nailed it.”

Scarlett Johansson doesn’t see herself as “the sexy one”…

Scarlett Johansson: “I’m the sexy one? Really? Have you SEEN Chris Hemsworth!? I think one of the qualities in the Widow that I love and am interested in is that she’s put the work in, and she’s at a place where she’s able to maybe do something for herself, and maybe even have a relationship with somebody and open up in that way. But there’s this greater calling that’s pulling her and she very selflessly choses that, and it’s heroic in a big way and a small way.

…but even she’s fond of the outfit.

Scarlett Johansson: “A Black Widow movie – that’d be cool! I’m always happy to get the cat suit on and get in front of all those mirrors, like Robert.”

Approaching an Avengers role is a little different to a regular role… and Chris Evans is still good at press conferences.

Chris Evans: “It may be a little different. In an action film there may not be as many tangible opportunities to play off of as an actor. Where the reality is a little more grounded, given the environment you’re in or the characters you’re playing off of, you might have a little more to pull from. But in a movie like this you might be sitting in front of a green screen or talking to a tennis ball. But I think everyone up here has a very healthy imagination, I think everyone grew up running around in their back yard with a cape around their neck. It’s a different muscle, but I think it’s a very similar approach. God, I nailed that one too.”

Robert Downey Jr: “Can we all agree that Evans is on fire!?”

Joss Whedon: “And Chris, you were the only one sitting around talking to a tennis ball. We know it comforts you… but it’s a little weird.”

Paul Bettany: “It was lovely. It was lovely to finally be on set with a bunch of people that I’ve been supposedly working with for ten years but hadn’t really met. So that was nice. It’s a double edged sword. Initially my job was turning up at the end of the movie with the superhero power that if anything was still unclear, I could clarify it by just talking.

“It would take two hours and they gave me a big bag of cash and then I would go home. And I couldn’t imagine that the contract could ever be better than that. But no, it was a dream. Everyone was a dream. They’re a bunch of really lovely, happy, well-paid actors. That’s a nice environment to work in.”

The superhero genre can run and run.

Joss Whedon: “The thing I loved about Marvel comics is the thing I love about what Kevin Feige is doing with the Marvel Universe, which is he approaches every movie as a completely new idea. A movie of some particular genre that happens to have superheroes in it. He’s not interested in creating a formula, he’s interested in creating a universe. So as long as he can stay alive… which I think is at least a few months more?

“I think It has legs. As long as somebody who really cares is at the head, trying to create new versions of the superhero movie, and not just fall into a pattern, then it can sustain for quite a while.”

The Avengers have varied inspirations… and like to one-up each other!

Chris Evans: “I think we can all agree with that! I’m gonna go a different way and say my old man. To me that’s who I am as a man, and that comes first.”

Mark Ruffalo: “It’d have to be Ghandi.”

…and it’s not just at press conferences that they mess about.

Is this what it’s like on set, Joss? Joss Whedon: “No, some of them are actually paying attention here.”