Since the Doctor Who Series 13 trailer was released on 25 July, fans have noticed a subtle, mysterious note at the very end. 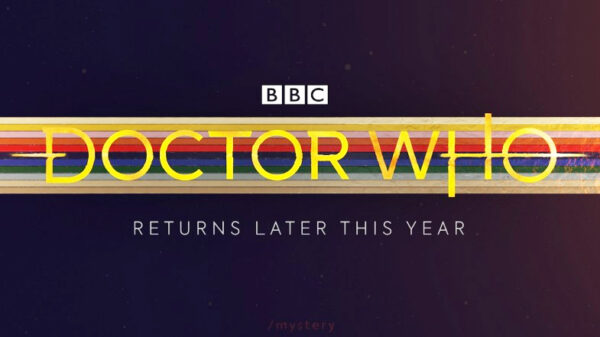 Written in small, slightly lighter text at the bottom is “/mystery”. It didn’t take long to fans to discover that this is a tag on the official doctor who website: doctorwho.tv/mystery. On the website is a field which asks for a password with text above it which reads:

“Welcome to a mystery across space and time. Work together to solve the hiDden clues and reveal a password below. #FindTheDoctor

What followed was a flurry of attempts to guess a password containing the letter D, capitalized in the word hiDden. Multiple attempts were discussed with the #FindTheDoctor hashtag on Twitter to no avail.

Some clever fans tried to find clues in the page code for the website. One phrase in particular, “X4G6H66TZ114Z33H19K6” found in the code elicited a response – but not the desired response.

Fans were left attempting to guess when the next clue to the mystery would appear. Then on 13 August at 1:13BST, also known as 13:13, another clue appeared in the form of a video on the website with a voice recording from Mandip Gill as Yaz with the words:

“A voice note from Yaz
The next Clue is coming soon. #FindTheDoctor”

This time, the letter C was capitalized in Clue.

The text of Yaz’s note, which may or may not be relevant to the password, is as follows:

“Hey Doctor! It’s me. I thought you said to meet you by the waterfall. It’s funny, I thought it was called the “hanging gardens” because it had loads of hanging baskets, like my nan’s house, but I haven’t seen any. Where did you say we’d go next, cuz I was thinking, snowball fight at the top of Everest then teaching Galileo “Bohemian Rhapsody”. What d’you reckon? Anyway, better go. People are starting to stare. Give us a ring when you get this, I’m not sure where you’ve gone.”

Also on 13 August, the Science Museum in London installed a temporary display of the thirteenth Doctor’s sonic screwdriver. The link to the exhibit contains this message:

This unusual object appears to be made of Sheffield steel and an unknown substance. In the right hands it can detect and interpret signals, open doors, and eVen light candles.” 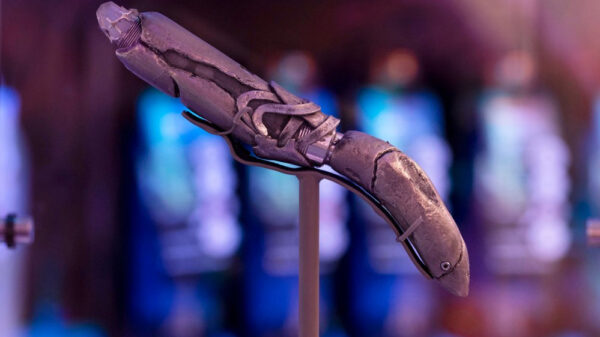 “This mysterious object is on display on the mezzanine level of the main shop.

Note the letter V in eVen is capitalized. The designation of the “unknown object” is an anagram for “DOCTOR WHO EMAIL” and contains “0209,” possibly the date 9 September, on which official Doctor Who email account will possibly send out a message containing more clues.

Then on 17 August, someone discovered a curious painting, La Boîte Bleue (The Blue Box), at the Walker Art Gallery in Liverpool. Liverpool is where the Doctor’s new Series 13 companion Dan Lewis resides.

found this at the walker museum in liverpool today #FindTheDoctor pic.twitter.com/h2lnfZnhzy

The link to the painting at the museum contained this curious message:

“National Museums Liverpool is home to more than 4 million objects. Our collections are rich and varied and tell many stories. Sometimes our objects are simple to interpret or understand but occasionally they raise more questions than they answer. This is indeed the case for a very special new acquisition. Our curators are consulting with international experts to examine the unusual symbolism contained in this seemingly typical, idyllic British scene. 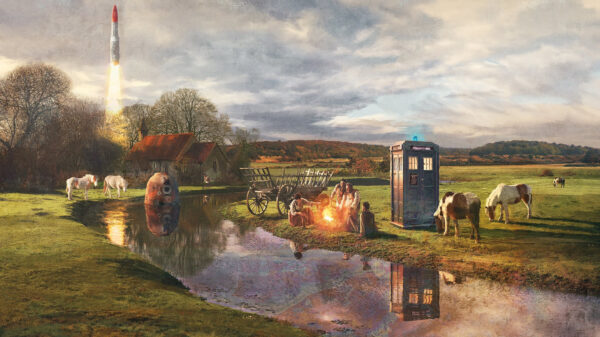 “La Boîte Bleue, painted in the 1860s by an unknown artist
Oil paint on canvas

This traditional rural scene is set in the British countryside and features a horse-drawn cart. On the riverbank sits a mYsterious blue object.

This time, the letter Y in mYsterious is capitalized.

The anachronous contents of the landscape painting itself are curious. It is said to be painted in 1860s, yet blue police boxes and the Black Arrow rocket date from the 1960s and the Soyuz TMA-19M seen in the stream dates from 2015. British astronaut Tim Peake returned to Earth in the Soyuz TMA-19M descent module in 2016.

Thus, the letters found as of 17 August in media using the #FindTheDoctor hashtag are D, C, V and Y.

On 13 July, the official Doctor Who Instagram account posted this photo which deviates from the original Nikola Tesla’s Night of Terror unit still taken by Ben Blackall. The Morse Code on the tape the Doctor peers at, which should show the results of a seismograph, says “LIVERPOOL GALLERY”. The Morse symbol for G is in red. This clue, hiden in plain sight, was not immediately discovered but it was surely meant to lead fans to the La Boîte Bleue painting.

This photo, released on the Official Doctor Who Twitter account on 16 August, contains the coordinates to Park Hill Flats in Sheffield, where the Doctor’s companion Yaz lives with her family. The coordinates can be seen in the lower left corner with the number 5 in a different colour.

A look at the photos posted the Park Hill Flats page on Google Maps contains some interesting contributions from “John Smith”, who left a photo of the TARDIS at the flats with the message, “FIND ME 14/07″.

The clues not using the #FindTheDoctor hashtag lead to password clues in other places which do use the hashtag. It’s unclear if the clues which don’t contain the hashtag contain parts of the password.

If they do, the additional characters are G, 5, and E.

There was a lull in the supply of clues, until 2 September, as indicated on the description attached to the sonic screwdriver at the Science Museum. The next clue appeared on the website for the Natural History Museum at South Kensington.

The thirteenth Doctor’s earring is encased in amber. The website gives this description:

“One of the more mysterious items in our collection, this unusual specimen has become the cause of intense speculation and discussion since its recent acquisition.

The item, named EPDUPSXIPNBH-TFQU, and part of a wider project, is not curreNtly on display as our team are consulting with the international scientific community about the importance of the find. It features an unknown object of metallic origin trapped in yellow amber.

This time, the N in CurreNtly is capitalised.

It didn’t take long for someone to decipher the item name.

So, a simple Caesar Cipher shift of the code from the Natural History Museum page gives us DOCTORWHOMAG-SEPT… #DoctorWho #FindTheDoctor pic.twitter.com/TvL6gYNbAS

The next issue of Doctor Who Magazine comes out on September 16 and will likely contain another clue to the mystery.

Thus, the letters found as of 2 September in media using the #FindTheDoctor hashtag are D, C, V, Y and N.

What the password will unlock remains a mystery — as does the purpose of what I assume is a scavenger hunt to generate excitement for Doctor Who Series 13. A frequent complaint I’ve observed on Twitter is that there is not enough new material to keep ardent fans engaged.

We will continue to update this article when more clues are discovered.