The first full season for Colin Baker’s sixth Doctor is the next release to come to Blu-ray with Season 22. All episodes are newly remastered from the best available sources.

Across an action-packed season of double-length episodes, Colin Baker’s Doctor and companion Peri (Nicola Bryant) face off against a host of classic monsters and villains, including Daleks, Cybermen, Sontarans, Davros (Terry Molloy) and The Master (Anthony Ainley) – as well as introducing new female nemesis The Rani (Kate O’Mara) and the villainous slug-like Sil (Nabil Shaban). Also returning is Patrick Troughton as the Second Doctor, and his companion Jamie (Frazer Hines).

Watch the specially-shot announcement trailer, The Eternal Mystery, a brand new mini-episode of classic Doctor Who written by new series contributor Pete McTighe (Kerblam! and Praxeus) and featuring Nicola Bryant back as Peri — or the Warrior Queen of King Yrcanos.

Doctor Who: The Collection – Season 22 includes the following stories from 1985: 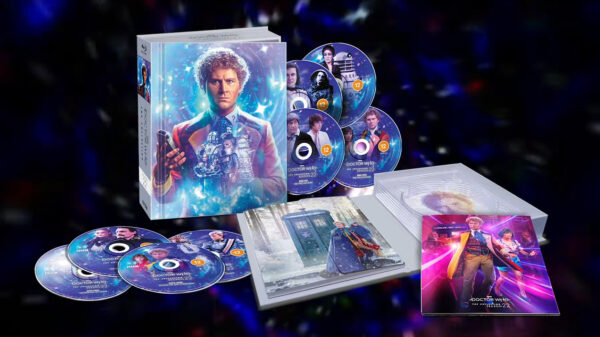 Brand New Documentaries: Including a making-of documentary for The Two Doctors, and a nostalgic trip back for Colin Baker and Nicola Bryant to Season 22’s filming locations.

In Conversation: Not one but three insightful feature-length interviews, with Colin Baker, Nicola Bryant and a surprise guest.

Extended Episodes: Including Vengeance on Varos, The Two Doctors (Part One) and Revelation of the Daleks (Part One).

A Fix With Sontarans: The Doctor and Tegan battle the Sontarans in this special mini-episode.

Immersive 5.1 Surround Sound: On Attack of the Cybermen, Vengeance on Varos and Revelation Of The Daleks.

Studio Footage: Rare behind-the-scenes material from Vengeance on Varos, The Two Doctors, Timelash and Revelation of the Daleks.

Rare Gems From The Archives: BBC archive material including The Colin Baker Years, plus content covering the promotion of the season and the controversial hiatus.

Info Text: Behind-the-scenes information and trivia on every episode.

You can pre-order Doctor Who: The Collection – Season 22 from Amazon, Rarewaves and HMV in the UK, from Sanity and JB in Australia and Amazon in the US.